In my hectic world, I have never really taken time to slow down.  Even when my body left me with no choice (cancer, heart surgery, 2 cases of near fatal pneumonia, and another undiagnosed heart episode), I rarely slow down.  I have always been known to overcome all my crazy health issues that came to me courtesy from my treatments from Hodgkin’s Lymphoma years ago.  That is just what I did.

My world was turned upside down again over the past year, although in fairness, it started long before that.  I had to put my furry companion of 14 years down after quality of life became an issue for him, the loss of my father and a very dear friend, the break-up of my second marriage, loss of my job due to downsizing, and of course, learning to deal with an amazing distance geographically between my children and I.

But as I mentioned, I rarely take opportunities to slow down, even when I am “freed” up by something else.  I simply find something else to replace it.  And currently, what I am dealing with is no exception.  While I plan for my next visit with my daughters, I am also still trying to secure work.  I also have a major court appearance in regards to my divorce, and the implications are huge and carry severe resolution to it.  Clearly no one will win regardless of the outcome, and clearly, it will be the children who lose.

Today is a rare day for me.  I am at half speed.  The day itself is a beautiful Fall day here in Florida.  I took some time to work on some various writing projects, and hang out on the beach behind my condo.  Blissful peace.  Time to clear my head of all things causing me stress.

As I sat down at my laptop, amongst all the busy hubbub of my life, I logged on to “Paul’s Heart” and I noticed something that I had taken for granted and forgotten about.  The amazing thing is, it is one thing that can never be taken away from me.  There is a counter on the front of my page.  And it is counting down to a number that even to this day is recognized as a major milestone. 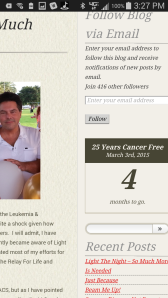 In less than 4 months, I will hit 25 years since my last treatment for Hodgkin’s Lymphoma.  Funny, it has taken this long, and in spite of everything else I have gone through in my life (not just the last two years), my body and I have defied the odds.  I am a long term cancer survivor.  No one can take that away from me.

Posted in Adoption, Cancer, Family and Friends, Inspired By..., Politics, Recreation, Side Effects, The Heart | Leave a comment

Light The Night – So Much More Is Needed

Tonight, I participated in my first “Light The Night” walk for the Leukemia & Lymphoma Society.  For many of you, this may come as quite a shock given how much I write about my cancer history and the stories of others.  I will admit, I have known about the LLS for most of my survival, but only recently became aware of Light The Night in recent years.  Like so many before, I concentrated most of my efforts for cancer support with the American Cancer Society through the Relay For Life and Making Strides.

I do not want to take away the efforts of the Relay and the ACS, but as I have pointed out several times throughout this blog, the whole idea of even needing the LLS and Light The Night, is just as important as the awareness of blood cancers such as lymphomas and leukemia.  I recall memories of my childhood where the majority of the conversations of cancer were dominated by one major killer, leukemia.  Sure, other cancers existed, but leukemia was pretty much the frontrunner at the time.  But since then, other cancers became more common, and more popular, especially to support.  There is no argument that breast, lung, prostate, and colon cancer are some of the biggest and most popular cancers today.  And because of that, the American Cancer Society, and most of medicine today, is focusing on cures for those.

But for those with a lesser cancer, like mine, Hodgkin’s Lymphoma, which only makes up 1% of all cancer diagnosis, the goal of the ACS and medicine is to find a cure for those bigger cancers.  The school of thought being that if they can solve the big ones, then the little cancers will be some much easier to beat as cures will surely follow.  When in reality, lymphomas and other blood cancers are beatable cancers.  And the cures are so close.  But lymphoma and leukemia do not get the support for research like the other cancers do.

I wrote about the “Faces Of Lymphoma” last month, hoping to spark some debate about all the popular people who have had lymphoma.  Society seems to respond when celebrities face breast cancer, colon cancer, surely that would have the same effect if people knew all the celebrities that had lymphoma.  Nope.  What is it about lymphoma really, that it does not matter to society to push for that cure?

Then I published two other stories, both with different endings, about Michael and Stephanie.  These were two of my more popular posts, and I do hope that perhaps seeing their pictures, would stir up support for a cure.

And so on this night, I met two very important people from the Leukemia & Lymphoma Society.  They are involved with the Southwest Florida chapter.  I spoke to them in great lengths to find out what can be done to finally take that next step to not only finding a cure for lymphoma and leukemia, but how to take care of its survivors who have had to battle the side effects from their treatments. 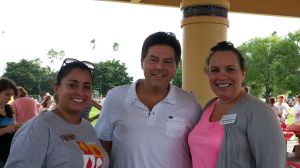 Next year, will be bigger and better.  I want to make sure of it.  As we finally made our walk, as I looked around at the 500 or so people, very few white balloons which symbolized survivors.  There were way too many gold balloons which symbolized loved ones, I am not sure if they were still living or passed away.  But seeing how I did not see a lot of white balloons along with the gold ones being carried, I could see how much more needs to be done.

Just as when I did my first Relay For Life, my first Light The Night left me filled with emotion.  I no longer consider my survivorship of 24 years as “no big deal.”  Considering how many people still die from lymphoma, I am one of the lucky ones.  I want everyone to have the opportunity to survive this awful disease just as I have, minus the late effects of course.