Something We Can All Relate To 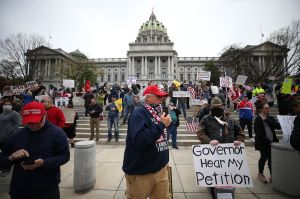 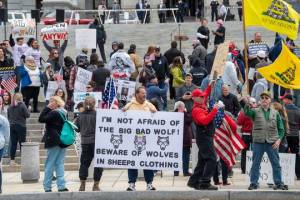 Our country, no, the entire world is in the grip of what is likely going to be the worst health crisis it has ever faced.  Information and misinformation make it difficult to figure out who is telling us the truth, and likely making it more dangerous in delaying protective steps necessary to protect us, and prevent the situation from getting worse.

The pictures I have shared above are emotionally provoking.  Some people see this photos and they see ignorant and selfish people risking not only their own health, but the health of all, including those on the front lines who may one day have to treat them because of their poor decision.

But for others, and this is going to shock some of my readers, but I can kind of empathize with them.  I am stressing kind of, because I believe without a doubt, they are fools and defiant as a three year old throwing a temper tantrum.  And this has nothing to do with their right to assemble and protest.  I believe in that right 100%, no matter what the cause, unlike those who have a selective criteria to be an acceptable protest.

Protesters want us to believe this is about freedom and liberties.  We are expected to think it is more important for an economy to thrive than for people to live.  But I want to argue something even further.  And here is where my empathy comes in. 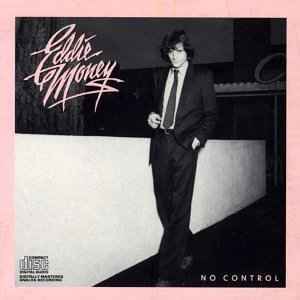 “Well they took me to the hospital,
And I swore I would’t go.
My blood was running much to high
My heart was much to slow.
The doctor had some questions, somethings he had to know.
My baby shook her head and said, the boy’s got no control.”

I used to think the worst thing about dealing with cancer used to be the hair loss, the nausea, the fear that I was going to die.  Looking back, I could not have been more wrong.

I was recently interviewed for a podcast for my perspective as a long term cancer survivor.  And it was during this interview that I realized what was actually the worst part of fighting cancer.  Seeing the protests and seeing all of the social media posts, confirmed it.  The two situations, while the circumstances are different, the perspective is the same.  It is a matter of all of us recognizing it, and then being able to empathize with each other.  Perhaps that might be the door to open enough to allow us to support each other during this health crisis.

My story, like others, I was “livin’ life” to its fullest.  Parties.  Working.  Girlfriend.  No cares in the world.  Not even aware of anything in the world.  I was in control of my own life.

The difficult part is, that you do not realize that you have lost all of that control with your life, with your body.  You are too distracted by all of the other things going on with your diagnostic tests, treatments, relationships, and other aspects of your life that you could not put on hold.

With the diagnosis, and this goes for any serious illness or injury or trauma you face, it is the same situation every time, you lose all control.  You have to get to this appointment.  You have a schedule to keep for your treatments.  There are things you need to avoid so that as not to react or counteract the treatments.  Patients get told of things that cannot be done, temporarily or ever again.  And your plans for the future?  Those likely will never exist again as you had dreamed of.  This is what we in the cancer world often refer to as the “new normal” once we are done.

For a period of time, could be months, could be years, as cancer patients, or dealing with another serious issue, we no longer have control.  We have to listen to those that know how to get us through the particular situation that we are dealing with.  We have to trust them, because they are the ones with the experience.

And yes, by losing that control, we lose our freedom.  But it is temporary and we know that.  And that is why we accept that loss of control.  Because we know in the end, that temporary concession is what will help us to survive.

To those who are protesting, I respect your right to protest.  I may disagree with some of the motives, but one thing I definitely understand, are those protesting over what they feel is a loss of their freedom.  Like millions of others, I get that.  And that is why I can empathize with them on that fact.  Knowing this, why cannot we convey to those protesters then, and convince them, that this loss of control is temporary?  For the health?  For their lives, and possibly the lives of their loved ones?

Yes, I am naive.  It should not be that hard to understand.  Unfortunately our society is not only politically driven, but also politically split.  There will always be an opposition now to the party in charge, and that opposition will have zero trust.

I cannot imagine where I would be today, thirty years later, had I not trusted my doctors.  Did I like them all?  Absolutely not.  I have written many times of my aggressive behavior toward at least two of them.  But that never kept me from trusting them, surrendering the temporary control of my life, so that they could save my life.

Like I said, I am naive.  The only way that you can truly appreciate this type of thinking, is to go through some sort of trauma like this yourself.  Sadly, this crisis is that trauma.  But unless you have gone through something before this moment, you cannot relate what I am saying.

But just as my battle with cancer, with Covid19, we are being asked to take precautions.  One of those precautions we must take, is to protect us from others that we cannot rely on to also take those precautions.  The contagious period is only up to fourteen days.  In theory, with what was being asked of us, with 100% compliance, worst case, we could have been done with this no longer than three weeks, at worst a month wrapping things up.  Yes, to do that would have meant giving up control, or as the protesters call it, their freedom.

So now, as restrictions ease up, in spite of continually climbing numbers, which means it is still bad and getting worse, but it is going to return us to the reckless exposure and risks, and we will have even more gruesome numbers to deal with that have been bad enough to take in.  And instead of a short time loss of control, or freedom, we will be looking at an extended and sustained period of loss of control.

I get it.  It was a political point you were trying to make.  But in reality, it was about giving up control of your life.  Most if you are fortunate, have never had to do that.  As a cancer survivor, I did.  I knew what to expect during this crisis.  I went through so much worse than we were being asked to do during this crisis.  I lost financially big time.  I know what it is like.  I know what financial loss feels like when you cannot work.

What it boils down to is the comparison to the three year old spoiled and defiant child who will not be told what to do.  In the end, that child has no choice, one way or another.  Except in this case, one way is dealing with the crisis in an accepting and cooperative effort, the other way is living with a death count that is unacceptable.  And being one of the lucky ones not to succumb to Covid19 does not make you right in your decision and stance.

This is not about freedom.  This is about control.  And right now, the Coronavirus is in control.  Are you going to make it worse, or are you going to do your part, as the “United” States of America, so that we can get through this, recover, and rebuild?  That choice you do have control over.

Posted in Bullying, Cancer, Education, Family and Friends, Inspired By..., Politics, Recreation, Side Effects, The Heart