Women And Children First, Not So Fast

As the Titanic began to sink, and evacuations became necessary, the cry went out, “WOMEN AND CHILDREN FIRST!”  It was a shout that only a coward of a man would ignore if he chose to take a spot on a lifeboat, denying a critical escape to a woman or child.

In 2009, the United States was hit with a virus called the “Swine Flu”, also known as H1N1.  This new strain of flu, was more deadly than the average seasonal flu.  Its distinction from other flus, was that it was passed from… pigs.

Swine flu earned the status of a pandemic, as it reached all around the world, killing hundreds of thousands of people.  But a vaccine gave hope to get this lethal flu under control.  And when it came time to get the vaccine, a certain group of people were to get the vaccine first, pregnant women, seniors, and those with compromised immune systems.

In 1988, my spleen was removed as part of the diagnostic process for my Hodgkin’s Lymphoma.  Thought of back then as “no big deal, lots of people live without their spleen,” it would eventually come back to haunt me, and millions of others who would now have the status of “compromised immune systems.”  We have no way to really fight off a serious infection and even a harder time avoiding one.  Clearly the priority was real.

I mentioned the groups of people that were urged to get vaccinated.  Clearly, you can recognize the pregnant, and the elderly.  But how do you recognize someone without a spleen or some other compromised immune system?

Can you tell by looking at this picture, I have no spleen?  Or, can you tell any one of the things I have to deal with in regard to my cancer survivorship?  My heart?  My lungs?  My spine?  The list goes on.  By the way, this picture was taken many years ago at Memorial Sloan Kettering Cancer Center, and this is my friend Nick, also known as the “ambassador”, who greets everyone the same way upon entering.

Or is this what someone needs to look like to be considered “sick enough?”

I typically do not cooperate with my doctors and vaccines, and to be clear I am not an anti-vaxxer, I just feel enough has been done to my body.  But the swine flu vaccine was one that my doctors were able to convince me to get.  The risks of not getting it were too extreme.

So there I stood, amongst the bursting bellies and silver hairs, all glaring back at me with disdain likely asking themselves, “what the hell is he doing here?  He looks fine.”  When I say it felt uncomfortable, that is an understatement, but somehow I hung on long enough to get to my turn in the line.

To be fair, I had no I.D. on me that identifies I have no spleen.  I was asked why I was there for the vaccine, if I met the criteria, and then I did what I always do, when I need to “prove” myself… up goes the shirt, revealing an eight inch scar from my belly button to my rib cage, along with a second scar from the bottom of my rib cage to my neck (one was for the spleen removal, the other my heart surgery).  The nurse knew what the scar was for.

But I should not have to go to this length to prove myself, should I?  Just because my shell does not confirm what you feel is your business.

Today, we are dealing with this monster, Covid19.  Never in my lifetime, did I ever think I would see a virus that would kill so many people, especially in the US alone.  When it comes to other illness tragedies, I had only heard about polio from my mother and how bad that was.  And then of course, we learned about the pandemic of 1918.  But this is the first in my lifetime, and hopefully will never happen again. 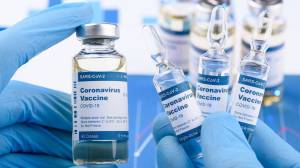 But here we are again, at the vaccine stage.  Amazingly, we got here at “warp” speed, a reference to Star Trek and how fast their space ship could travel.  And again, as the vaccine is manufactured, administration needs to be determined based on priority, and with the consideration of just how lethal this virus is.

The correct decision has been made to make sure that all medical personnel get the vaccine first.  After all, they are the ones constantly put at risk by innocent victims and arrogant deniers who contract the virus, too many of those medical personnel contracting it themselves, and dying.  The bottom line, without them, we have no one else to take care of the sick.  It makes total sense to inoculate them first.  Afterwards, I believe the plan is to vaccinate the elderly population, a clear and vulnerable sect of society.

And then… the vulnerable.  Those with pre existing comorbidities impacted more severely by the virus, those with heart, lung, immunity, diabetes and other complications, me.  People in my situation will actually be put ahead of women and children, I am sure bringing that uncomfortable and resentful glare once again.

I have not even decided if I will get the vaccine.  It is not a decision I take lightly.  I was subjected to therapies for my cancer, that were not researched for long term effects, which I now deal with today, some, crippling, some near fatal.  And that is the issue I have with this vaccine.  Yes, it is great that they discovered it as quickly as they did, but they know less about long term effects about this vaccine, than they did about my treatments.  I will unlikely spend a lot of conversations with my doctors, trying to weigh the risks for and against.  And I do trust my doctors.  They also respect my concerns.  We will see how this plays out.  But if I do, I dread those glares again, just because I do not look the part.

Posted in Cancer, Education, Family and Friends, Inspired By..., Politics, Side Effects, The Heart | Leave a comment