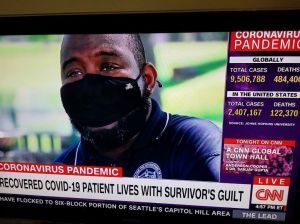 Have you ever had one of those moments, either walking or driving by someone or something, and your head snaps back because you thought you saw something but were not quite sure?  That is what happened to me yesterday.  I was flipping through television channels, a skill that I have mastered, knowing I only have to spend less than a second to know if it is going to be something that I might be interested in.

The man pictured above had survived the worst that Covid19 could do to him short of dying.  He experienced the Acute Respiratory Syndrome (ARS, the pnuemonia diagnosis normally fatal) as well as sepsis, which by itself is fatal.  At the age of 37, he spent weeks in the hospital.  In his interview, he says, “the hardest part for me is seeing how many people die from Covid19, why did I live?  And everybody else died.”

There are two myths about “Survivor’s Guilt.”  The first, often this term was used for those who had served in the military, previously called “shell shock”, “battle fatigue,” among others.  But at some point, during the 1980’s, some events in our history resulted in people having survived natural disasters dealing with emotional survival issues especially when there were mass casualties were associated with it.  And then, upon the completion of my cancer treatments, though not diagnosed officially until 2008, I developed what was definitely called “Survivor’s Guilt.”

Myth number two, just because someone experiences “Survivor’s Guilt,” does not mean they wish that they had not survived, want to die, or are ungrateful.  Quite the contrary.

I first can trace my Survivor Guilt issue, to the first cancer patient that I counseled following my cancer treatments.  She was a fourteen year old girl at the time, and she had the exact same cancer that I did.  I have her story, called “Jennifer’s Story” on the page section of my blog.  But in summary, she would not survive her Hodgkin’s Lymphoma.  She would never hear the words remission.  And as I visited with her over the three years, I often sat across from her mother while visiting with Jennifer, wondering what might be going through her mother’s mind as I sat there, cured of the same cancer her child would die from.

Jennifer was the first experience I had with survivor guilt, and I would have many more experiences like this over my thirty years.  And it would not just occur with Hodgkin’s Lymphoma directly, but the first half of my thirty years of survival were issue free, whereas so many I knew were dealing with harsh late developing side effects, but not me.  Some would die as well from those issues.  And then of course, I would join that club of long term survivors with late effects, and deal with at least four issues that were serious enough to cost me my life if not dealt with promptly and correctly.  And yet, here I am, while other survivors did not survive theirs, and of course, still other Hodgkin’s survivors as well not making remission.

Make no mistake, I am definitely glad to have survived all of these years.  I have been blessed with two wonderful daughters and watch them grow, and I even count on being able to see many of their adult years.  I believe that I have a good team of doctors and specialists, and just as important, a support network of survivors that no one could have imagined back before the 1990’s and the internet.

I just wish that every one  that I crossed paths with, could have had that same opportunity as me.  And I cannot make those feelings stop.

It took a therapist specializing in cancer survivorship to explain “Survivorship Guilt.”  I spent years in therapy for this, to discover that there were other issues associated with my cancer journey that complicated things.  And then there was life as well and the many issues that came up.  Soon, my cancer issues and survivor guilt often found themselves taking a backseat to employer related discrimination issues, other family member medical issues, family deaths, and divorces.  Sure, those not going through cancer, deal with all of those issues on a daily basis, some deal with all, some maybe one or two of the issues.  But when you throw in cancer, survivorship, and it effects, it really complicates things, and that is when peer survivors and professional therapists make a difference.

But wait, “do you mean seeing a shrink?”  Right, that stigma and stereotype, only crazy people need to see a psychiatrist.

I promise you, there is not one survivor I know, or have ever known, who has had the counsel of a therapist that would have matched the stereotype or deserving of the stigma.  Some of my fellow survivors find it sufficient just to relate with another survivor, but some have feelings much stronger, and I encourage anyone who feels that way, needing more than their peers, their friends, even their significant other, to seek out a therapist.  It really makes a difference.

I still have my survivor’s guilt after thirty years.  I have said goodbye to so many.  But I have so many that remind me every day, that there is a reason I am still here.  Because I offer them the same support, and remind them of the same things, that there are so many that depend on our survival.  Until any of us possess the power to make the sun rise and set, form ocean waves, or make snow fall, we just have to accept that things happen the way that they do, just because.

But there is going to be a new large population of people who are going to survive this horrific virus, Covid19, and because of how contagious it is, many are likely to lose loved ones and friends.  And like the gentleman above, left to wonder why them, and not the others.

As a country, we need to do better to offer better emotional help not just to those with the obvious issues, but also those who survive traumas whether it be war, a car accident, a natural disaster, cancer, or a pandemic.  There are too many of us that struggle with this to just be forgotten to deal with on our own.

2 thoughts on “Living With Survivor’s Guilt”