As of 1988, the only thing I knew about cancer, was people died from it.  Patients would go through surgeries and treatments and hopefully get to hear the word “remission.”  But you never heard of anyone living a long time after if they were ever told they were in remission.

I was twenty-two years old at the time.  The only computer I had access to, was for operational needs of the company that I worked for.  Though our computers would work from one store location to another, we had no “internet” as it is known today.  There was no way to seek out anyone else who had gone through Hodgkin’s Lymphoma to see if they were cured, still living, or passed away.

From the moment I heard the words, “you have cancer,” I had it in my mind, all that I needed was to hear that just one other person beat it, and then I would too.  I had an uncle who spoke of a friend, who in the 1970’s had dealt with Hodgkin’s Lymphoma.  And with a little research, I found a professional football player with the New York Giants, Karl Nelson, had battled Hodgkin’s.

After all that effort, I had heard of two individuals who had faced what I was staring at.  Now, all I needed to do was make contact.  Long story short, especially with how quickly things move with a Hodgkin’s Lymphoma diagnosis, I never made contact with anyone before, during, or after my treatments.  I was on my own.

I remained “alone” through the first five years following the end of my treatments.  And then, I bought my first computer.  With that, a thing called “the internet.”  I soon learned that I could research things over the computer, and stumbled across a “list serve” (an old term for an email list), with a membership of Hodgkin’s Lymphoma patients and survivors.  HOLY SHIT!  There were more people like me!  A lot more people like me!  As it turned out, we were scattered all over, not just the United States, but all over the world.

Then, I found another email list, actually part of a larger grouping, through the American Cancer Online Resources, ACOR for short.  This organization covered not just Hodgkin’s Lymphoma, but so many other forms of cancer, as well as other issues associated with dealing with cancer, such as money, fertility, etc.  It was soon after signing up for information about Hodgkin’s Lymphoma, it was recommended to me that I check out one of the lists on ACOR for “long term cancer survivors.”

At just over five years of survivorship, I hardly considered myself “long term.”  But the length of my survivorship had nothing to do with my status, rather, those members on this list, had been experiencing late developing side effects from the treatments that cured them of their cancer.  The problem?  Medicine barely recognized these issues because, they just made no sense.  And therefore, often got undiagnosed.  And if you did get a proper diagnosis, it was undetermined if you would get the proper care to treat that issue.  At least, there was a group of people who understood each other and what we were going through.  There were others who could answer our questions, and give us the tools that we needed to approach our doctors.

And then… Facebook!  With the introduction of Facebook and other social media, communications between current patients and survivors increased to levels unimagined by me in 1988.  Soon, various groups and subgroups popped up, consisting of thousands of members, not just all over the country, but all over the world.

Not only is information being shared by us with each other, but with the medical community as well, and more of us, affected by effects from our treatments, are now finally getting the help needed to manage their quality of life.

It is not just about sharing information either.  Even during the early days of the list serve, the need to actually meet other survivors, to put a face to names, to see with our own eyes, that others have survived. 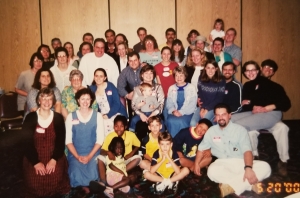 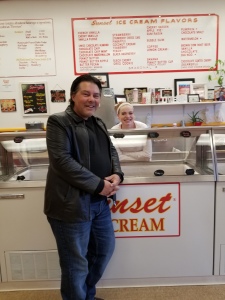 This progress has been recognized in just my thirty years of cancer survivorship, something, besides raising a family of my own, I never thought I would see.

I have given countless speeches on survivorship and the issues we face travelling all across the United States over the years.  I have been published in various newsletters and books, even having one of my writings performed (see “My Dad Was Just Like Me” at https://www.youtube.com/watch?v=3KI6LQu2Nts ).  And I am finally writing my first full length book on my experiences as a cancer survivor.

Becoming a long term survivor has not just been about the number of years since I heard, “you are in remission.”  Becoming that survivor has meant not letting cancer define who I am, but has taught me that even though, I cannot make a difference in certain aspects of life (I cannot donate blood or organs as a cancer survivor), I can make the difference in sharing my experiences, my knowledge, my resources, and the stories of fellow survivors.  I do not need to be a celebrity or pro athlete that had Hodgkin’s Lymphoma to make a difference.  That is what being a long term survivor has meant to me, making that difference.