Of the things that I should be able to deal with, when it comes to my survivorship issues, is that of the mind.  Like all of my other issues from when I went through my cancer experience of Hodgkin’s Lymphoma, only I, and my doctors are aware that it exists.

When we hear the term “post traumatic stress disorder,” or PTSD, we automatically just assume that the issue is related to either war time, or an act of violence such as the crime of rape, assault, or murder.  It is expected that survivors of these issues would have a lot to deal to resolve what they had witnessed.

The truth is, PTSD actually impacts so many other people and for many other reasons, weather events and other natural disasters, accidents, and major illnesses just to name some.

PTSD is one of the issues I have carried most of my survivorship of Hodgkin’s Lymphoma, normally in the form of “survivor’s guilt,” which is just as it is called.  I have written many articles on Survivor’s Guilts here and elsewhere.

Flashbacks, or as I call them “daymares” (like nightmares but while awake), are when a particular situation occurs, that take you back to your crisis or event with vivid life-like reality.  For instance… 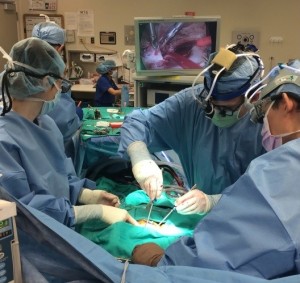 In 2008, when I “officially” was recognized as someone dealing with late effect issues from my treatments, courtesy of an emergency double bypass via open heart surgery.  You can catch up on that on “Paul’s Heart” under “CABG – Not Just A Green Leafy Vegetable.”

I had been released from the hospital a week after the surgery.  I had placed myself comfortably on the sofa as I was dealing with quite a bit of pain.  My wife (at the time), had resumed her normal activity of watching her favorite soap opera.

The soap opera was “The Young And The Restless”.  The character was Victoria Newman.  Is was late April of 2008.  Considering I do not watch daytime television, how is that for remembering details?  A current plot, unbeknownst to me, had Newman undergoing open heart surgery, that episode.  I did not know why.  I did not care.

PTSD.  From that point on, I have not been able to watch any kind of plot involving heart surgery.

I have witnessed others go through their own trauma, reliving the episodes in the form of flashbacks.

My first ex-wife was in a horrific head-on car collision, trapped on a two lane highway, no where to escape.  Ever since, often faced with approaching headlights, even from the passenger seat of a car, could escalate her anxiety.

My father, witnessed the horrific accident of my stepmother being hit by a car, crossing the street, witnessing the entire incident from impact, to where she finally landed, sadly around this time of year.  How many times on television do you see movies and tv shows, comedies even, do you see people being hit by cars, buses, and trucks?  Too many, especially for my dad.

A year and a half ago, I had my own brush with a crash, my first in my 37 years of driving.  At one of our busiest intersections during the day, late at night, not so much, I was in a left turn lane.  Across from me, was a car, heading straight, south to be exact.  We both had red lights.  And then, my left arrow appeared, her light clearly still had to be red, or so I thought, as she came accelerating at me, in her 2019 Dodge Charger, head on.  As I was now in the middle of the intersection, I had just a moment to decide my fate of the impact, head-on, or quick turn, and if so, which direction, in the event the other driver might realize what was about to happen and turn also.

I turned hard to my left, while the other driver continued straight at me, as if the driver was “threatening me” or “warning me” as if I had done something wrong.  The other car t-boned me, crushing the passenger side of my car, deploying my airbags.  Other than bumper cars at an amusement park, I had never had a collision, or heard the sickening sounds of a car accident.  I was stunned, but was without serious injury.  My car, proudly reliable at over 200,000 miles, was totaled.

I find that I am okay during daylight hours when I have no choice driving through that intersection, even making that fateful turn.  But it is another story at night.  And I can still see it clear as it happened.

Fortunately, my flashbacks do not require much attention, as much as my other health concerns.  But when they do happen, they are just as serious as when they first occurred.