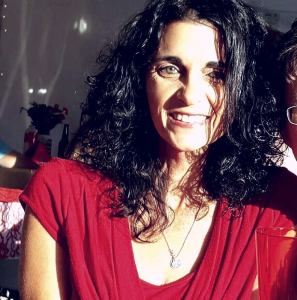 Last week, I found out that a fellow long term survivor of Hodgkin’s Lymphoma had passed away suddenly.  I am going to apologize in advance for what may seem like a scattered and unorganized post.  Normally, as I do these posts, remembering fellow survivors, I am a bit more put together with my thoughts.

Those of us who knew Michele, were all caught off guard by the news, and likely discovered by mistake.  In our circle of survivors, it is not uncommon for us to disappear into the background, and just watch what is going on.  Combined with the all-consuming issue of Covid19, we found out Michele passed away long ago, just as states were beginning to set restrictions.  Her last post was actually two days before she passed away, showing no awareness that her end was near.

Typical of one of us, a long term survivor of Hodgkin’s Lymphoma, she struggled with many late side effects from the treatments that cured her of her cancer.  Some days were more difficult than others.  She found most of her strongest support among our group, because with all of us dealing with similar issues, we not only understood what she was going through, we knew what she was going through.

Just before Covid19 took over, she and I had a discussion about two issues that we shared (I will not state them out respect for her privacy).  But as I had experienced these events, and their causes, she found direction to assist her doctor in directions to pursue not only answers, but hopefully management.  Multiple trips to the hospital for the same thing, left her frustrated, as it does all of us.

Michele was not really complicated.  She had two young children as do I.  They were her world.  And now their mother is gone, a feeling I do not wish on anyone, including my own.  Unfortunately the reality for so many of my fellow survivors.  But any strength or stamina she had, it went to her children.

Over the years, we did have other little “non” Hodgkin’s related banter, especially when she found out I was a Seattle Seahawk fan.  Being from New England, she was all to happy to remind me of the awful finish to the Super Bowl where her Patriots ended up victorious due to a huge coaching error.

There were a lot of fun things written about Michele in her memoriam that showed, in spite of all of the health struggles she had, she still made the most of her life with her children.

But as for us survivors, the suddenness of her passing, in spite of her struggles, and not really knowing what ultimately caused her passing, has shaken us.  We know our health is fragile, and we do not take our days lightly.  Even when we are not having our best day, we do not want it to be our last.

Our group of survivors continues to grow, and I can only wish that they would have had the chance to meet Michele.  Like I said, she was inspirational to so many.