Finding Something Good Out Of Something So Tragic, Offers Small Consolation 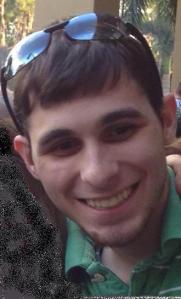 I first wrote about Michael Scheidemann’s story back in September (see “Meet Michael” in the post archives or “Michael” in the pages section).  It is a tragedy that I will always believe could have been prevented.  I am usually objective and professional about my comments.  But with my experience as a long term cancer survivor, and the knowledge of side effects from treatments, and the technology available to monitor and detect issues related to those side effects, yes, I believe without a shadow of a doubt that his death, could have been prevented.

The picture above is when I met Michael about a month after he finished his treatment for the same cancer that I had, Hodgkin’s Lymphoma.  Michael and I shared a lot of similarities.  Our birthdays were just a day apart.  I was the same age as Michael when he was diagnosed.  And then, what should have been for the better, and one would assume due to the advances of medicine in the decades since I had been treated, Michael was treated  with a standard treatment that exposed Michael to half of the chemotherapy drugs that I was given, and did not have to go through any radiation therapy.  He sailed through his treatments without one complaint, and with only one visible side effect, lost his hair.

From this picture on, things were supposed to be in one direction, survival, living his life in remission of one of the more curable forms of cancer.  That is not what happened.

Soon after this picture was taken, it was discovered that one of the drugs that both Michael and I were given, had caused irreparable damage to his heart.  At the time, all the family could do is move forward, fix what had been failing, not look back at what had been done.  Extraordinary measures were made to save his life.  But on January 6, 2014, his body could not handle any more trauma and he passed away at the young age of 24.

For the purposes of this post, I will discuss my comments about what went wrong on another post.  Because as I promised the Scheidemann family, I believe, and have confirmed that a simple test could have been performed, and should have been performed since a drug with known possible cardiac side effects, could have determined the damage that had begun as soon as the first or second dose of the drug.  With the discovery of any damage, and clearly there was, a different treatment regimen could have, and should have been used.  And if I can do anything for this family, I will help them prove this so that Michael’s death will not be in vain.

It is an unwritten expectation in life, that it is only children, who are supposed to bury their parents, not the other way around.  I have never experienced the loss of a child, nor do I ever hope to.  And I am certain that the loss of a parent pales in comparison.  As a parent, we feel we must protect our children and do everything we can, and that in death of a child, somehow a parent feels as if more could have been done.  Regardless of how many times I have spoken with Michael’s mother and father, they will always carry this burden, in spite of me reminding them of all the things they did do for him.  But you see, there is no “prior experience” with having cancer.  Once you are thrown into the fight, you must be focused to get done what needs to be done, not think about all the other scenarios.  Everything that happens during this battle, is nothing more than cause and reaction.  We do what we have to, and hope that is good enough.  It has to.

Following Michael’s passing, his family did something extraordinary in Michael’s memory.  Michael was a student at Florida Gulf Coast University, needing just six courses to graduate with a degree in political science.  He had actually registered for classes that he had delayed to undergo his chemo treatment, and was ready to begin again, before everything went horribly wrong.  The family put two plans of action into play in Michael’s memory, one for Michael, and the other “from Michael.” 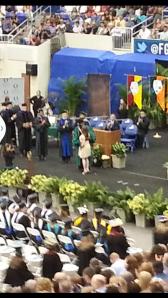 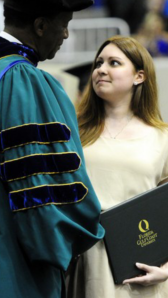 Earlier this year, FGCU had notified the Scheidemann family that Michael would be given his degree posthumously.  His older sister Alyssa, also and FGCU alumni, accepted his degree, in his memory.

In the meantime, the family was hard at work, establishing a memorial scholarship fund, in Michael’s memory.  The scholarship was set up to assist students who faced similar challenges as Michael.  Through determination of the family, and the dedication of those who knew of Michael and his family, the Michael E. Scheidemann Inspirational Scholarship Endowed Fund was established, which will now award money to a deserving student at FGCU, to assist with college expenses.

A very special luncheon was held yesterday, to gather recipients of the school’s scholarships, and the sponsors who made the scholarships possible.  Yesterday, the Scheidemanns got to meet the young student, who is the benefactor of the first Michael E. Scheidemann Inspirational Scholarship Endowed Fund.

Make no mistake, while the rest of us are truly touched by this gift presented, it by no means takes away the pain that this family feels every day, without their son and brother, Michael.  But they are extremely happy, that they have been able to help a young man, afford his education.  Michael would have wanted it this way.

If you would like to make a contribution to this scholarship, especially with those interested in making donations before the end of the year, please consider the Michael E. Scheidemann Inspirational Scholarship Endowed Fund.  Here is the information:

send to the attention of:
Christopher Simoneau