A Throwback Thursday From The Heart

For many, biological birthing is not an option to those who wish to be parents.  Other options to assist in physically giving birth exist, but for many, not even those methods provide fruitful.

For parents like me, for me to become a parent, adoption was the only option available.  One of the chemotherapy drugs used to treat my Hodgkin’s Lymphoma was “mustargen”, a derivative of the same mustard gas Saddam Hussein used to kill thousands of his people.  The plus side about the drug is that it was critical in curing my cancer.  The down side, it also took away my ability to have children.

My only option, if not able to have a significant other give physical birth to my child, yet be able to experience “birth”, was to go through adoption.  Once that decision was made, the decision of whether to go international or stay domestic had to be made.  I will address what went behind those decisions in a different post.  Today, I wanted to make this post about what it was like, to experience the “births” of my daughters.

I can only imagine about the range of emotions and excitement swirling in a delivery room.  And other than the physical experiences of giving birth, I am certain what happened next, whether through adoption or giving birth, the feelings of becoming a parent were the same.

All the families who travelled with us were gathered into a main room.  Down the hallway, we could hear the cries of our children coming to us, assisted by staff from the orphanage where our daughters were adopted from. 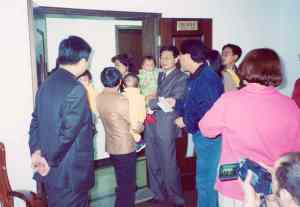 And then it happened, just as a doctor delivering a baby, our daughters were placed into our arms. 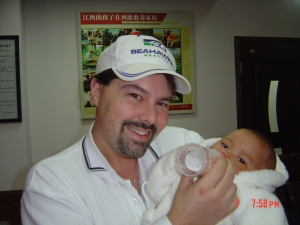 It took less than five minutes after Madison was placed in my arms that I knew I wanted to adopt again, and this would bring Emmalie into our lives.  Yes, that is how I experienced “birth.”

Not only did I gain two beautiful girls into my life, but so many other people who will always be forever in my heart.  There are the “facilitators” that took care of us while we were in China.

And of course, there were nineteen other families that forever will be tied to us for the rest of our lives. 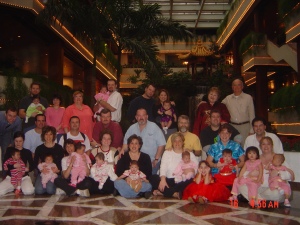 For some, we may never see each other again, but there is a reason that adoptive families are often referred to as “forever” families.  Our daughters that were adopted together all share that one bond with each other, the dates of March 14, 2004 and February 6, 2006.  Most of the children still see each other to this day, perhaps not in large groups, but by individual visits.  And with social media, it makes it even easier for the children to keep in touch with each other as they grow into their teen years.

Today is a special Throwback Thursday for me.

Posted in Adoption, Cancer, Education, Family and Friends, Inspired By..., Side Effects | Leave a comment