I need to stress for the “trolls” of my blog, that I am not making any reference to the details of my divorce or custody in this post.

Pennsylvania includes in its custody paperwork, something called “General Rules Of Conduct”.  Now while an actual custody agreement is put into order, this list of rules, actually is not written into the order, but rather it is “assumed” that the rules will be followed.  But when you think about it, should the rules even be necessary?  In the relationships between the mother and the child, the father and the child, and the mother and the father, exactly what part of the divorce is the child’s fault, that rules like the following actually need to be stated: 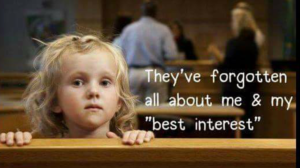 Sure, the rules are a little more detailed than that.  But what it comes down to, the child plays no role in the process of the divorce, and the parents are not divorcing the child, therefore common sense would tell you that you do not need rules of conduct.  The status of “parent” and “child” never changes in a divorce.

Posted in Bullying, Family and Friends, Inspired By...