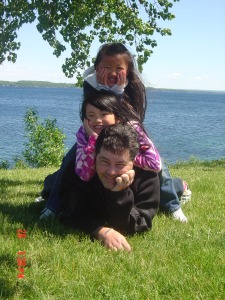 Pardon me while I make a rare Bible reference, but for this post, it is appropriate.  In first Corinthians, it states, “whey I was a child, I played as a child.  When I became a man, I put the ways of childhood behind me.”  Let’s face it, we only get one shot at childhood.  I cannot remember at what age, I actually had to keep pleading with my oldest daughter, “Maddy, please, stay a kid.  You don’t get to be one forever.  Let Mommy and Daddy worry about the grown up things.”  My oldest being as intuitive as she is, and as caring as she is, simply cannot help herself, she wants to help with grown up things.

My daughters unfortunately have had their share of “grown up” moments to deal with.  None of which were their choice.  Having seen their father hooked up to all kinds of machines following my heart surgery.  Watching their grandfather die from lung cancer.  And of course, witness their mother and father go through a difficult divorce process.  There are a lot more instances that their childhood has been put on hold, while their mother and I had serious issues to work with.  In any case, in many cases it could not be helped, in some, perhaps it could.

I have done everything I can, to make sure that my daughters have not had any part of the divorce process, other than dealing with the separation of their mother and I.

When the decision to file for the divorce was made by me, we had already been sleeping in separate locations of the house.  We barely spoke to each other, and when we did, there was obvious tension.  We typically went in our own directions, and we no longer turned to each other to solutions that were plaguing our home.

I am not sure what possessed my ex to insist on this, but she wanted the girls to be told everything that was going on.  She felt they needed to know.  I on the other hand, felt that at the ages of 8 and 10, they were too young.  It was bad enough hearing frequently from my daughters “why does mommy yell at you so much?” to which I usually responded, “it’s a grown up thing.”  And it always was.  I wanted to be careful, that no matter how miserable my ex and I were, we never made the children feel it was their fault.  And it never was or will be their fault.  Multiple attempts at counseling only brought out the issues, but never provided any way to resolve them.  Often times, we would leave feeling even more resentment than when we had arrived for the appointment.  But it was clearly our problem, not our children.

My ex loves to force issues.  And she was steadfast in telling the children everything.  I do not know if she had been hoping my mind would be changed once the children would be put in the crosshairs of the divorce because she knows my daughters mean everything to me.  I would and will never hurt my children.  Clearly she felt I would believe I was hurting my children by continuing forward with the filing of the divorce.  But later that evening, we did sit down with the girls and I told them that I had filed for divorce.

That may seem like a simple and assumed statement, but it is something that I regularly tell the girls.  As my ex and I move on in our lives, there will be significant others in our lives, but at no point will I attempt to replace their mother with anyone else.  During our visits with each other, I constantly reinforce the importance of them being able to talk to both their mother and I.  We are always, and will always be their parents.  So far, we are demonstrating that we can co-parent our daughters separately.  I will not undermine her authority with a punishment.  I will support her decisions if they are in the best interests of the girls.

I will do my best to protect my daughters from all the negativity that swirls in the divorce process.  During my visits, the girls do not hear of the word “divorce”, and I make sure that our times are occupied as they once were, as Daddy and daughters.  I am lucky, those around me do not talk with me about my divorce, which I do not mind, but it also means that it is less likely for any of my friends to let a comment accidently slip if my children happen to be around.  Of course, I cannot control this when I am away from them and they are with their mother.  But I hope that they too are not discussing their personal feelings about me in front of them, not just in front of them, but even if they are within earshot.  My kids have hearing like bats.  The last thing that should happen is to put my daughters into a situation where their loyalty to either parent should be put into question.  They love their mother.  They love me.  And if they also have feelings for someone who is criticizing either my ex or I, it is that individual who will eventually lose out on the respect and love of my children.

Posted in Adoption, Cancer, Family and Friends, Inspired By..., Side Effects, The Heart