This Of Course Is A Course In Discourse

***while this post references politics, it does not lean in either direction

It is not something unusual for me to spend time with my daughters and during that time, I make moments learning opportunities.  There is nothing better than real time examples to remember by.  But this moment, more rare than two full moons in one month, the 2nd on Halloween (and if I have to throw in the fact that it is 2020), being able to experience and explain an election with my daughters in the great details that I was taught growing up.  Like many across the country and the world, we were no different, following results and commentary.

At no time did they hear me “ooo” or “tsk” as results came in.  In fact, at no time, did either even ask me who I voted for, one of the first things I told my daughters, their vote is sacred to them, and it is no one’s business who they voted for.

But as time went on, they did not hear me complain, see me celebrate any calls made.  They did hear a lot of “what’s” and “why’s”.  You see, some day, they will get to vote.  And as one friend of mine snapped back at me when I stressed the importance of understanding the election process, “don’t tell me I am not informed about who I vote for,” she clearly missed the point.  I will get to that in just a second. 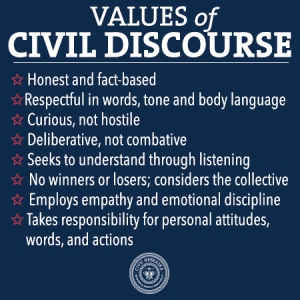 I am a registered non-party, because I cannot stand behind either one.  I know and understand the platforms of both.  But it is the ideas of my friends who support both parties that have me curious.  But in order to understand them, you have to have conversations.

There are two friends (since High School) that I talk with occasionally to get their perspectives of how others think politically.  Not in the literal sense, civil discourse is an oxymoron, two terms having seemingly opposite meanings.  Discourse is of course a debate, or argument.  And we know many arguments are far from being civil, especially when it comes to debating politics.

But I lean on these two friends, and honestly, the list is growing larger of people willing to talk, and learn how others think and what they believe.  We still disagree at the end for the most part, but we each have a respect for each other because of our tones and not only the willingness to talk, but to listen.

One constant debate we have, is the concept of the “united states” versus the responsibilities of each individual states.  They believe that the federal government should be responsible for some things, and not others, and I believe, that 50 different ideas to handle one problem, makes more problems.  But we have many of these types of discussions.  And conversations are always respectful, and we end as friends.  Civil discourse.

You can see, the first issue of dealing with civil discourse, is making sure you are on the same page.  I never once told her that she needed to do her homework on her candidate.  Although, if you are a party voter, chances are you go straight down the ballot of your party, and truly have no idea anything of the candidate, other than the initial after the name, issues of the individual candidates making no difference.

No, I was referring to the actual process itself, after the vote is cast.  And this is the problem, and the perfect opportunity to explain to my daughters, how elections work.  And because I am an independent, I can do so without leaning in either direction.

I need to offer a disclaimer, I am not an expert in elections, nor did I major in political science in college.  But I do have a simple understanding of the election process, much of which came from my own local campaigns years ago.

One simple question, what happens after you vote?  Simple answer, you count.  Now, over the years, so much has been done to suppress voting rights by humans, and in 2020, a pandemic threw a huge wrench into the works resulting in record turnout of voting by mail.  More on that in a bit.

After the count, the votes get certified by each state.  Then the electoral college meets and casts the “ceremonial” vote.  Congress confirms the vote.  And of course, then there is the inauguration, and we have a new president.  Over our years, elections have not always run smoothly, but there are processes in place to protect our most cherished quality of our democracy, the right to vote.

Until now, our most controversial national election was 2000, between Al Gore and George W. Bush.  Initially, election night had Gore leading Bush by over half a million votes in the state of Florida, the state that would ultimately decide the presidential election.  The media networks had claimed Gore was the projected winner.  But we soon were informed that the lead had shrunk to just a couple of thousand, forcing a retraction of the projection, and the controversy of the “hanging chad.”  In 2000, ballots in Florida were punch cards, and apparently, some of the cards did not punch completely, leaving the “scrap” called a “chad”, hanging, leaving the validity of the ballot in question.  There is more to the story, but you get it.  It was a clusterfudge.

The 2020 election has so much more controversial fuel, potentially causing great harm to our sacred voting process like never seen before.  Social media, main stream media, campaigns, and even the candidates themselves are causing confusion that the average voter forgets, there is a process that has to take place.

We knew there would be no result on Tuesday, November 3rd.  And it had nothing to do with the overwhelming votes by mail, but the record setting turnout.  Though honestly, for being a free country of 330,000,000 Americans, having a turnout to vote of 150,000,000 is pitiful.  The media was much more careful not to repeat what happened in the 2000 election.  Social media was much more reckless.

But unlike when I first voted, the state I grew up in, only had to deal with in-person voting the day of, and absentee voting.  But the 2020 election had now three major components in most states, including my former home state, mail-in balloting, early voting, and day of voting.  Then of course you factor in the animosity that each side has against each other, and you have a record turnout, in spite of blatant acts of voter suppression in various states.  But that is another post.

Here is when the person I spoke about earlier needs a lesson in the election process, not just picking her candidate.

Fact, our election day is officially the first Tuesday of the November.  Why on a work day, I will never know, because clearly holding an election on a weekend when most have the day off would allow more people to vote without having to take off from work.  But I digress.

Mail-in ballots come in as early as weeks in advance, and some states allow them to be received after that 1st Tuesday, as long as post-marked by then, up to a certain time window.  And given the knee-capping that the postmaster general gave the postal service, causing a major slowdown and loss of mail, everyone knew this would cause problems.  That was the intent.  Non-the-less, this is the process.

As is typical, at least as long as I can remember, TV networks at the end of Election Day would “proclaim” the winner of the election.  It is ironic that it occurred much more smoothly than with all the technological bells and whistles that we have today.  But traditionally, this is how it has been.  But officially, it is not the networks that declare the winner.  That actually does not happen for many weeks after because there are other steps in the election process to take place first.  But we are an instant gratification society.  We need an answer right away.  And really, the TV networks are not far off (usually) from the exact results, figured out by mathematicians and statisticians, winners are declared, not certified.

In the meantime, and it varies from state to state per their election rules, recounts can occur, and lawsuits may be filed to nullify results.  These are all part of the process.

It is not until the results are certified, by county election officials I believe, that they election is official.  And even then, there are still more steps until we have our next president.  Once certified, then it is off to the electoral college.  I am not going to get into the weeds of what the electoral college is, but basically, it consists of 538 representatives, one for every member of the senate and house of representatives in Congress.  Each state’s political party in power picks their EC members who are then expected to cast their votes, based on the will of the state for that candidate for president, a formality if you will.

Here is where it gets fuzzy.  Just because a candidate wins a state, electors can go rogue and vote against the popular winner of the state.  I have heard stories that it can happen, but usually does not.  The intimidation and basically thuggery that occurs with that type of attempt is overwhelming.  So, we will keep it simple, the EC goes as it is supposed to and we have a new president according to the EC.  The results have to go before Congress, and THEN, we officially have a new president-elect.  The president is called that because until the president is sworn in on inauguration day, that individual is not called the president (nor does that person possess any of the powers of that position).

There is squabbling, again, something I have never really seen in my voting lifetime, this refusal to accept the results of election day, even if proclaimed by TV networks to call the victor “president-elect.”  And it is even more absurd, that after all of these decades, now those opposed to the apparent winner, want to wait for the official steps to be taken, even if mathematically confirmed, before acknowledging Joe Biden as the president-elect, as if holding on for a few more weeks will change anything.

So, when this individual that I mentioned back at the beginning of this post took offense at my suggestion that she needed to educate herself on the voting process, she clearly missed my point.  As brief as her objection to my comment was, so was her knowledge of the election process.

But do you know who knows more now about the election process than that person?

My daughters.  They are not old enough to vote.  But they have witnessed the good and the bad of this election cycle.  And like many other teenagers, they will make an impact in 2024.  And at least my daughters will understand there is more to our elections than just casting a vote, which they also definitely understand.