Over the the last twelve years of my survivorship, one question that comes up over and over and over again.. “why can’t you work?”  This question comes from many different people, former co-workers, friends, and even family.  The question coming from most of the family is really kind of a weird question, because most have all been there from the beginning, well, except for two.

A recent photo with my daughters and I, I am sure the question will come up again.  And yes, that question has come up from my daughters as well.  I have taken my time explaining my health to my daughters, because as many of the health issues that have popped up, occurred when they were much younger, and the last thing that I wanted to do was scare them with the realistic possibility of dying – a near fatal heart blockage, and a battle with sepsis.  But every year, as they have gotten older, they have noticed that I do less and less physically.  For nearly all their life, they knew me as someone who put in a lot of hours at work and at home.

My daughters were not there when I went through my battle with Hodgkin’s Lymphoma, and was treated with an exposure to radiation of four times the lifetime maximum, and several toxic chemotherapy drugs.  Thirty years ago, survivorship was based on five years.  In simpler words, we were not expected to survive past those five years.  And clearly as you are reading this, there is a problem with that thinking.  In fact, that thinking was way wrong even before my diagnosis.  Hodgkin’s had already been treated for decades before me, with even more barbaric treatments.  I personally know survivors with 10, 20, 30, and more years survival than me from Hodgkin’s.

So here is the problem, only up until a decade or so ago, less than a handful of doctors realized that survivors of Hodgkin’s were developing side effects from the exposure to the high dose radiation and chemotherapy.  And just as tragic, only a small percentage of us long term survivors, literally out of millions, we are probably lucky if 10% actually know that many of their health issues today are attributed to their treatments.

Medicine had not been teaching cancer survivorship to its future doctors and nurses.  And for the most part, even today, many medical personnel only learn of these issues from their patients.  Nothing like on the job training.  The truth is, there is actually a well documented resource available for survivors like me, as well as new survivors.  And it is available to EVERY doctor, EVERY doctor.

The Survivorship Guidelines are put out by the Children’s Oncology Group.  So, if you are interested in researching this further, simply go to the link I provided.  Back to the question posed at the beginning.

Some cynics may say, “gee Paul, you seemed fine to do everything before the doctors told you everything that was wrong with you.”  The only part of that statement that was correct,  was not that I was able to do everything, but I was in unbelievable pain, and could get no answers as to why.  Oh, and the heart thing, I put up with the symptoms of a “widowmaker” blockage of 90% of my main artery, simply because I was not seeing any doctors because I was not being followed up.  The cardiologist who discovered this initial condition put it this way… “it was not a question ‘if’ you were going to die, but ‘when'”.

Following that, I developed a team of experts at Memorial Sloan Kettering, who discovered many things that had developed over the years, finally answers as to why I felt this way.  But getting answers was not the most important part.  Discovering how I was going to manage the issues that had now been discovered.  Everything that was happening to me could not be cured.  Everything was and is, continuing to get worse.  My health is not about getting better, but rather slowing down the progression of these issues, management.

The average person honestly could not handle hearing the things that have been done to me.  Shit, many in my family could not handle it.  Which leaves me only one option, I have to put on the “brave face” and just not let anyone know how I am feeling, or the unbelievable pain I am dealing with.  In order to do that, at least until a few years ago, was to go on multiple pain medications combined with a sleep medication because the pain was still bad enough to keep me awake in spite of being on 3 opiodes at the same time.  But all those medications were able to get me though my work day, which was important to everyone else.  Forget the quality of life that I was sacrificing just to keep others happy.

And the downside to this effort, because I pushed my body as hard as I did, my issues were actually accelerating in deterioration, my body getting much worse, much quicker.  In spite of being put on multiple physical restrictions at work from certain activities, I was still given other details which either made things worse for me or at best, continued the pace.  I had restrictions of weights, mobility, and movement.  Were it not for the American With Disabilities Act, I would have been out of a job long before that.  But because of the ADA, my employer was required to accommodate my health restrictions as much as they could, as long as there was work for me to do.

But as the years went on, I continued to push myself.  Back in 2012, and January/February of 2013, I made five trips to the emergency room (one by ambulance at 3am), two that had the potential to end fatally.  My heart surgery four years earlier was the wake up call I should have paid attention to earlier.  I should have been listening to my doctors for all those years, telling me I should consider retirement on disability because of all the health issues I was now dealing with.  But I was not prepared, especially mentally to “quit”, which is what I felt I was doing.

A couple of years after that, and some new directions that my employer was making staff and building wise, combined with actions related to my divorce, I ended up on that path to reality, disability.  I have long had the handicap placard for my car. 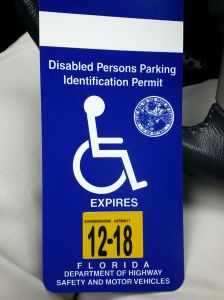 I do not like to use it, but will if necessary.  I really still have a hard time with the stares at the appearance of my youth and the shell of my body showing no reason to need this assistance.  But depending on the activity, if I need to carry something, or the weather conditions, my body is instantly shut down by symptoms that develop very quickly, taking a long time to recover, and I really hate that worse than the stares.

So, when my daughters ask me, “why can’t I work?”, I explain to them that I really do want to work.  But besides the issues of my health, there are these factors to consider by any perspective employer:

Now if you factor in all those facts, two other important details.  The last thing an employer wants is an employee being hurt on the job, because that would mean a claim on their Worker’s Compensation plan.  And quite possibly other penalties depending on what could have been done to prevent.  It would make no difference me having these issues, if I got hurt working for them, it would cost them.

And then there is this.  Following my heart surgery, I became unable to maintain a robust attendance record I used to brag about.  Until then, I used to brag about year after year of perfect attendance, including during the days of my original treatments.  In 30 radiation treatments and 8 months of chemo, I never missed one day of work.  But years later, my body could no longer take it.  Following my heart surgery, I would never see perfect attendance again, in fact, absenteeism for me dropped to 30% and near the end of my employment, I missed half of my work schedule either due to my health issues themselves, or doctor appointments to deal with them.

So, “why can’t I work?”  My daughters get it.  And so should anyone else who asks this question of me, or asks it of anyone else forced into the unintentional and unwanted decision of going on to disability.  It is not that I cannot work.  But who wants to hire someone who has all the health restrictions that I have, and the attendance record I have?  And the only way that I can get around those two issues is to be on multiple opiodes taking away the quality of my life.  My decision is an easy one to make.

I am not immortal.  And I know that the health issues that I am dealing with, have reduced my mortality a lot.  I joke that I must have been a cat in my former life, given that I have dealt with a health crisis at least 5 times that could have resulted in my death.  And if by some chance, this is more than a coincidence, I am doing what I can to take care of the remaining 4 lives that I have left.

My doctors have told me they will do what they can to make sure that I see my daughters graduate, walk my daughters down the aisle (if they choose to get married), and even see grandchildren.  I just need to do what I can do which means listening to the warnings of my doctors and not the gripes of people who feel their judgement of something they do not understand should carry some weight in my remaining years.

I cannot do the things I used to do, and not just work.  I no longer play softball and volleyball, my exercises are limited, I no longer ski or do other outdoor activities.  I do what I can, within my limitations, that allow me to enjoy the time with my daughters.  I am not crippled by my health, at least not yet, and to protect the average person who cannot handle what I am dealing with, I go through each day, continuing to only allow people to see the shell of a “seemingly healthy young man with no outside signs of health problems… who even smiles.”  Who I am on the outside is what matters to you.  What I am dealing with on the inside is what matters to me.  And that is why I am not working.

And for those in my life that still want to doubt, I carry my entire medical file with me that backs up everything I am dealing with.  Someday, my daughters will ask to see it, so that they learn the details.  But for now, they know what I am dealing with because they have seen it.

Posted in Bullying, Cancer, Education, Family and Friends, Inspired By..., Recreation, Side Effects, The Heart