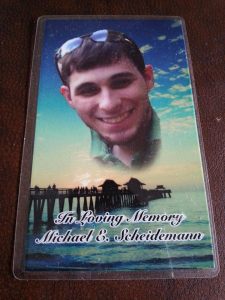 Throughout my blog, I have occasionally mentioned a young man named Michael.  Here is his story.

Having been born visually impaired, Michael had faced enough hurdles in his life. But with strong family support, he never faced any other serious issue, barely even a common cold. But early in 2013, after noticing a huge swollen lymph node, which grew quite quickly after a needle biopsy seemed to agitate it further, at the age of 23, coincidentally the same age as I was at the time I was diagnosed, Michael had been diagnosed with Hodgkin’s Lymphoma. He had already begun his treatments when his mother reached out to the Facebook page for information. That is when she found me. We began to exchange messages back and forth in regards to Michael’s care. And for the sake of their family, they were encouraged by the fact that they had found someone who had survived the same cancer for a long time.

I followed Michael throughout the majority of his treatments.  Approximately half-way through his treatments, we “met”.  “Met” is in quotes because we did not meet in the traditional way face to face, but since he was located over a thousand miles away, we used current technology, Facetime.  And there he was.  He may have been 23, but I simply saw someone just too young to have gone through this.  In spite of what he was going through, he had a smile that stretched from ear to ear.  And I thought I knew a lot about lymphoma and treatments.  This kid studied everything he was going through as well.  He would actually recite statistics and information to me about his experiences.

At one point, he even took me along to one of his treatments to show me how different things were from the dismal times that I was treated.  Little did I know at that time, his gift to me would help me deal with the fact that months later I would have to accompany my father into a chemotherapy suite, something I had not done in over 24 years.

I followed Michael through his treatments, his booster shots for white cell and red blood cell production, and an occasional issue with some minor side effects.  After all, that is why blood work is done during treatments to monitor how well your body is tolerating the treatments, and to set the course for the next treatment.  He was finished with his treatments and had been declared in remission.  This young man had made such an impression on me.

I had been working on some other ideas pertaining to “Paul’s Heart” and expanding my public speaking arena, when it occurred to me, that the area where Michael was from, had a huge networking area.  So in effort to investigate those options, I arranged to meet Michael during my visit.  I also participated in a local Breast Cancer fundraiser for the American Cancer Society called “Making Strides”.  What happened next, I do not even have the right to call it a nightmare for me.  I barely knew Michael after all.  Michael, and those who loved him dearly would face a devastating situation.

It was mid-October, and Michael’s mother had been in contact with me about a chronic cough that he had been dealing with for three weeks.  Michael’s mother wanted him to be seen by the doctor, but over those weeks, his doctor simply prescribed antibiotics and steroids to deal with the cough.  I suggested that she take him to the doctor, that it was probably nothing more than some sort of post-nasal drip.  He had not been sick.  The doctor decided to have him see a pulmonologist.  With the appointment scheduled for the following week, all they could do is just wait.  But a couple of days later, Michael’s mother actually called me and said Michael’s cough had grown worse, and it kept him up all night.  There were still days to go until he saw the pulmonologist.  I urged her to take Michael to the emergency room.  A pulmonologist would have to deal with the issue instead of making him wait any longer.  Michael’s mother hung up.  And I just sat, watching my phone for a text message that he had been seen, treated, and would be going home.  Instead, these were the text messages that were exchanged:

“the doctor has seen him”

“they have him on meds”

and then about a half hour later

And that was the last message that I had received for over twenty minutes.  All I could do was pray that there was some other activity going on in the emergency room area, but as time dragged on, I could only fear the worse.  It had to be Michael.

Michael’s mother finally sent me another text.  It was Michael that coded.  They were able to revive him but a bigger problem had been discovered.  It was not his lungs that were causing the problem, it was his heart.  The chemo drug Adriamyacin, had damaged the left side of his heart that it was no longer able to pump blood efficiently.  I believe the number was less than 15%.  This drug has been known, to have this rare side effect, but there is no monitoring for damage during treatment, only before (for a baseline), and at a follow up post treatment which had not even been ordered.

Due to the complications of his cancer care and the involvement of Michael’s heart, the local hospital was unable to go any further with treating Michael.  So he had to be flown by helicopter to a hospital two hours away, that would be capable of handling such an extreme cardiac situation.  To save his life, they would need to put an artificial pump in Michael to do what his heart could no longer do.  And since he could not be considered for a heart transplant because he had just completed his chemo, Michael was going to have to live with this for at least five years until possible consideration for a transplant.

His family stayed by his side for over a month, sacrificing work and home just to see that Michael recovered.  There were struggles, but just before Thanksgiving, Michael got to go home.

Three weeks later, an issue developed with the pump, causing another emergency airlift back to the hospital, as their local hospitals were not equipped to handle such cases.  The pump had failed and would need to be replaced again.

Out of respect for the family, I am not discussing any further details.  Just barely into the new year, Michael, at the age of 24, lost his battle, unable to recover from all the trauma to his young, tiny, fragile body.

The drug that caused this to happen is an anthracycline, and though it does not happen often, it does have documentation of causing damage to the heart muscle.  But perhaps even more puzzling, is why did the damage hit Michael, and not me, or the hundreds of other people I personally know who have been given the drug.  But since we cannot determine who is affected by the drug as severe as Michael, I have made it my personal wish to his family, that I will push as hard as I can, for surveillance when this drug is used.

A simple ultrasound performed at the latest, midway through Michael’s treatment regimen I feel would have shown results different from the baseline scan that had been done.  At that point, that drug could have ceased to be used, at the least modified, or even a different treatment regimen could have been ordered.  We monitor bloodwork to see if our body is up to the next treatment.  Why do we not do it for a body organ that may have the potential to be affected, like the heart?  I do not want to hear that it is not cost-effective.  Tell that to the family who lost their son and brother.

Do not get me wrong.  Adriamyacin is a good and effective drug to treat Hodgkin’s Lymphoma.  But it is dangerous.  And as the telethon Standup2Cancer demonstrated last night, we need to find better and safer modes of treatment.

In memory of Michael, and on behalf of his mother and father and sister, I ask you to share Michael’s story.  Help to push for better surveillance for side effects that may not seem so obvious on the outside of the body.  It was decades before my side effects were recognized what damage the drugs had done.  But at least I got to live my remission.  Michael did not get to live more than two months post treatment.  I would have given anything to trade places with Michael to give him that shot at life.

In closing, I want to stress, what happened to Michael is not the norm.  I know plenty of other survivors who have not had any issues.  But I tell this story in hopes of preventing another parent from having to shed tears for a life gone too soon.