Talking To Children About Cancer

My children were long from even being thought of when I was diagnosed with Hodgkin’s Lymphoma.  But once I had to begin dealing with the late developing side effects from the treatments that I received for my cancer, actually forced to deal with these side effects, even though my daughters were quite young, I had a decision to make. 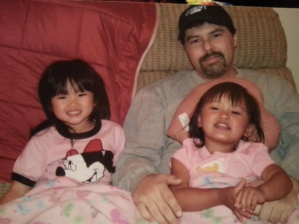 It was over 10 years ago, my daughters, then aged 3 and 5, had no choice.  They were now aware that their Dad, had at one time, faced cancer.  Though their immediate attention was the fact that I just had open heart surgery to repair long term damage from excessive radiation to my heart as part of my cancer treatments.

Later on in elementary school, my daughters would take up causes for “Hodgkin’s Lymphoma” because their dad had it.  It was cute.  Though they really did not have a concept of just how serious my situation was, they knew Hodgkin’s was a cancer, and I had beaten it.  And up until that time, that is all that I had told them.

As a counselor, I have often been asked, “when is the right time to tell a child?”  The truth is, there never is a right time.  No matter what the issues, a child should always be left to be a child.  There will be plenty of time for a child to act and talk like a grown-up.  Unfortunately, not when it comes to cancer, or any other serious diagnosis.  Which is why, it is so important that you remember, they are children, even if faced with the fact that their parent (or other loved one is facing such a horrible disease).  Keep the information on a level that they can understand, and without the somber tone of drama often associated with talking about cancer.

Kids will get it.  They understand a lot more than we give them credit for.  And let’s face it, times are a lot different from decades ago, when a cancer diagnosis was a definite death sentence.  With social media, survivors are available to give hope, where once there was none.

As I mentioned, my daughters are all too aware how I got to this point of survivorship in my life.  They are not aware of all the details of my health issues that I face.  Over the summer, we began the discussion that I did not know how to begin, that I had Hodgkin’s Lymphoma.

Again, keeping it at a level of understanding for young teens, they learned that it lasted a period of time of over a year and a half.  They learned that I went through chemotherapy and radiation.  And now they have learned that it was those treatments that caused the many health issues I face today.

So, in summary so far, they have learned that I have been around a long time having faced a deadly disease.  Hodgkin’s Lymphoma is considered a “rare” cancer, and thus, often hard to diagnose.  How rare?  According to the American Cancer Society, just over 5,000 new cases get diagnosed every year.  Compared to over 320,000 breast cancer diagnosis every year in women (according to breastcancer.org).  And there are over 140,000 cases of colon and rectal cancer diagnosed every year according to the ACS.

Oddly, the survival rate for Hodgkin’s is one of the higher rates, at around 86%.  One would think that a cure rate would be higher for a more prevalent cancer, but in the case of Hodgkin’s, it is not.  The unfortunate thing about the survival rate for Hodgkin’s, is that it has stayed around this number since 1988, when I was diagnosed.  There are still 14% that do not survive.  How is it possible, to be so close to a 100% curable cancer, things have not improved?  Sure, newer treatments have been discovered, and some may be safer to use, but yet, the survival rate has remained the same.

In a year and a half, I will hit my 30 year mark of survivorship.  My daughters are very aware of how far I have come now.  As one of my daughters has put it, “you are a fighter.  You always have been to me.  You don’t give up.  You will always be one of the strongest people I will ever know.”

2 thoughts on “Talking To Children About Cancer”