At this time last year, I was as secure as I possible could be.  Because of the uncertainty of the path of this storm, which was not determined literally until 24-36 hours before, which was too late for the expensive evacuation process, I had made the decision to secure myself behind storm shutters and ride out the storm.  It was not a decision that I made lightly, but as I said, the uncertainty of the path, and the expense of evacuation were both deterrents in me leaving my home.  All I could do was prepare as best as all of us who remained, were instructed to do.  As I write this, at 12:30pm, three hours later from that time, as previously warned, the eye of Hurricane Irma would pass directly over my city.

You could hear the storm grow in severity as it approached with the winds rattling the storm shutters harder and harder.  Unsecured objects being lifted from their sedentary spots and hurled harder than cannonballs into buildings and shutters.  Of course, being enclosed, there was no way to witness the destruction that was occurring outside.  I could just hear it getting worse, louder and louder.

A calm would come eventually, as the eye passed overhead.  Nothing near the beauty as shown in movies, but it was definitely much more calm than just minutes before.  Against warnings, as the broadcasters knew many would do, I ventured outside to experience this eerie calmness.  It was still raining, and the winds had died down from the 140mph, to at my guess, 20 to 30mph.  And within minutes, the winds instantly returned to the triple digit speed the storm arrived with.

A couple of hours later, Irma was gone except for some remnant bands.

Under normal circumstance, September 11th, would be a day that I remember what happened to our country.  And really, given the charged political atmosphere had become, especially here in Florida, Irma had become a much needed distraction from two sides of people with different ideas and opinions.  For after this storm, we were all one people, trying to recover from one of the worst storms in history. 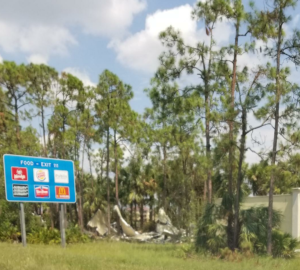 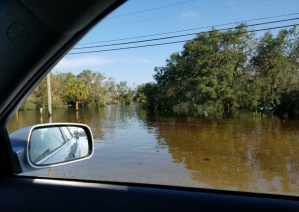 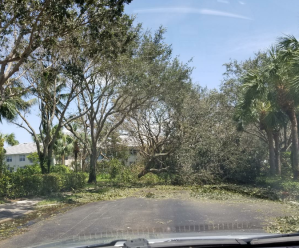 My building is in the process of finally being repaired, its roof still not completed on this anniversary.  We are in the middle of rainy season, and there is another two potential hurricanes heading to Florida while the Carolina’s brace for Hurricane Florence this week.

Right now however, we have recovered for the most part, at least as far as our lives go.  There are still probably 25% of people that still have repairs that need to be done.

Sadly, the American people of Puerto Rico, were hit with a storm right after Irma, Maria.  And to this day, the island is still in horrible shape.  Over 3,000 people died in Puerto Rico as a result of Maria.  And repairs are still necessary for so many.  They need help.

I have gone through seven hurricanes in my life, this the first one going through the eye of the hurricane.  From moment one following the storm, we learned what it was like to live without power, without running water, without the ability to cook.  The list goes on.  As I said though, neighbors and friends got through this together, not divided.  No matter what our differences, we did prove that we can get along and help each other.

As the expression goes on, literally,  “you don’t know what you’ve got til it’s gone.”

Posted in Education, Family and Friends, Food, Inspired By...