I have many things that I advocate.  And you have probably seen me write about all of them at least once, if not, at the beginning of the month, when everyone begins to announce that month’s “awareness” cause.  I used to have only one thing that I advocated in the month of November, until a couple of years ago.

My father died a year and a half ago from lung cancer.  His diagnosis did not come as any surprise to anyone except for him.  The side effect of denial affects only the smoker, “it will never happen to me” or “I wish I would have known.”  He smoked tobacco products over 50 years, trying multiple times to quit, unfortunately being unable to fight off the addictive additives of the various tobacco products.

Over the years, I have done my best to protect my children from second hand smoke, even witnessing the act of smoking.  I am more than aware of the peer pressure that I have no control over, but one thing was certain, my children were not going to learn to start smoking by witnessing me smoking.  It was hard enough for my daughters to have witnessed the later stages of their grandfather’s life, and knowing what his fate was going to be, just because he smoked tobacco.

It was a shame really.  As his fate became more of a reality, the bargaining stage of his life had become apparent, begging for more time, wishing that he had never started.  It is too bad the tobacco companies did not care enough to create an antidote to reverse the addictiveness of their product.

But now, as my daughters are “tween” in age, they have become more aware than ever of their environment.  It may not have been enough for them to have witnessed their grandfather die of lung cancer, caused by decades of smoking.  I am certain that before they become adults, they will not only witness someone close to them smoking (or now, vaping).  My only hope is that they remember what happened to their grandfather died from, and that it was not good enough to just hope “I can quit any time I want”, because you cannot.

I realize that I am overstating the obvious that smoking does cause cancer, and not just lung cancer.  But to be fair, there are other circumstances that cause cancer, that really are no fault of our own.  Every day we breath in chemicals and pollution.  And if you are a cancer patient, especially a long term survivor like myself and many others, there is a pretty good chance, that due to either chemotherapy or radiation therapy, that we have an increased chance of developing lung cancer, having traded a cure for a cause.

That point I am trying to make, there are enough things that we have no control over in our lives, but smoking is one that we do control and the role it plays in developing lung cancer.

But as I said, November is a bittersweet month for me as far as advocacy.  One of the happier and more positive causes that I support is adoption. 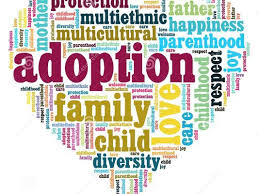 The process of adoption gave me the opportunity to fulfill a dream, to become a father.  Cancer took away my ability to have children biologically.  And though science provided some opportunities, it was not successful.  And in 2003, the process began to adopt the first of my two daughters.  There are pros and cons to domestic and international adoptions, closed (private) and open.  But China gave me the opportunity that could not be achieved through the United States due to financial and my health history.

I will never truly understand the feelings either of my daughters will have as to the absence of their origins, other than the country we know that they came from.   I have some information for them, about how and where they were found, who took care of them prior to their adoption, and of course, lots of photos during the visits to China to complete the process.

And although our family has gone through a major disruption, that many seem to say is “unfair” to children who have gone through so much in their lives already, nothing should really change.  Both their mother and I play major roles in their lives, and I have made it clear that the girls will have only one “mother” and only one “father.”  Our responsibilities to our children have not changed.  And it is “unfair” to the children, to make a blanket assumption that somehow the children would be better off under any other circumstances, especially when the complexities of the family have not been discussed publicly.

As they children get older, they will have to deal with the fact that they are adopted.  Our agency had given us material a long time ago to prepare us for the times that would come, dealing with identity, racism, bigotry, in a multi-racial family.  Of course, there is going to be the serious relationship issue as well to deal with.  Parenting will continue.  While the adoption circumstance is obvious, I have always treated my daughters, as my daughters.  And through the adoption process, my dream of becoming a father has been realized.  There is a lot to be done yet as I prepare them through their education and life experiences.

Adoption is a wonderful opportunity to build a family, under any circumstance.