Last month, I introduced you to a young and inspirational woman named Stephanie.  You can read her story either by the page “Stephanie’s Words”, or by the post dated in September with the same title (the post is edited for both length and details).

Last evening, in Bucks County, PA, Stephanie continued her fight against Lymphoma participating in the annual “Light The Night” campaign.  “Light The Night” is a fundraiser for the Leukemia and Lymphoma Society.  But just as important, it is an opportunity to bring awareness to blood cancers such as Lymphoma and Leukemia, some, many rare but curable cancers.

Stephanie is approaching her third anniversary in remission, something I would be willing to bet, many friends and family thought they would never see.  But the heart that Stephanie possesses, let no one ever doubt the courage and strength this woman possesses.

On her poster board that she carried during her walk, Stephanie paid tribute to current patients, memorialized a patient who lost his life, and honored those survivors.  If you look on the bottom corner of the sign, she also honored me.  I am over a thousand miles away, but I cannot express what it meant to see my name and my spirit supported by someone more than a 1000 miles away.  But you know, that is the really cool thing about cancer patients and survivors.  We know that we have each other to lean on, and count on.  We know what it is like, and we know what is needed to get through this fight.

Stephanie, you rock.  Thank you. 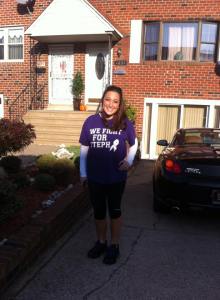 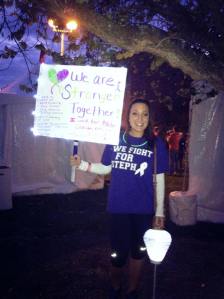