Voter Fraud This Is Not – Part 2 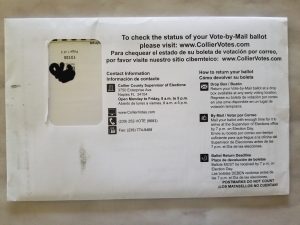 Here it is.  My official “mail-in” ballot.  IT IS THE ONLY ONE THAT I HAVE RECIEVED!  If you recall, in the first part of my “not voter fraud” post, I shared with you several items that I did receive that some people perceive as “ballot” material, which those items were not.  Though I have redacted bar codes and certain information, you can still tell that this belongs to me.

Now I know, there is the chance that someone might say, they have received multiple ballots, or even dead people have received them.  No, they do not.  If you received another ballot, it is because there was a mistake that has been corrected, and those very bar codes like you see on my packet, will no longer work on the incorrect ballot.  And the only way that a dead person will receive this is after they have died before the system has been able to catch up before ballots get mailed out.  Now, that that is out of the way.

So, the most important thing inside the packet, is the ballot itself.  My ballot happens to be 3 pages, but I have only pictured the first.  And of course, I had not filled it out just yet.  But this is the exact same ballot that I would receive, voting in person.

The next part, is really interesting.  The Secrecy Sleeve.

It is just a piece of paper, with instructions on how to secure your ballot, privately.  And to do this…

you fold the “secrecy sleeve” in half, and place the ballot inside.  And ta-da, you ballot is cast in secret. 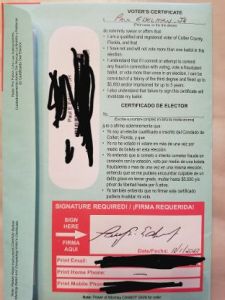 Next, you place the ballot in the envelope that is supplied.  On the back side, is your affidavit that the ballot is yours and that you have filled it out.  It has the bar code to register that you cast your ballot, and… AND… it has a place for you to provide your signature.  That’s right, you have to sign your mail-in ballot.

And with that, I filled out my ballot, folded it in half, and placed inside the “secrecy sleeve”, and sealed the envelope.

Only one thing left to do, put postage on it, and mail it.  The one thing people may not be aware of, is the extra postage needed because of the larger envelope.  POSTAGE TO MAIL YOUR BALLOT IS $.70!  Again, there is a bar code on the envelope.  Why?  It allows you to confirm that your ballot was received, and cannot be submitted again.

NO VOTER FRAUD WITH THIS BALLOT!

Our right to vote is one of the most important rights we have as an American.  I have several options that make it fairly easy to vote, whether in person, early voting, or by mail.  And it is my right to choose how I vote.  I do not buy into conspiracy theories while at the same time, I do acknowledge that there can be problems, just not widespread enough to affect an outcome.

It does just so happen, I am one of the “vulnerable” to Covid19.  And though there are some who feel the need to “shame” people whether with words or memes, that if you can “stand in line at Home Depot” or Walmart, you can stand in line to vote, as the president himself now faces the reality, that even in an outdoor setting, someone can still contract the virus.  So, no.  Standing in line for a prescription or perhaps some groceries is a necessity for me.  Standing in line to vote, when other options are available, are not.

My ballot has been mailed, and I plan to verify that it was received.

This is not voter fraud.  And that is the end of that.

Posted in Bullying, Education, Family and Friends, Inspired By..., Politics