Father’s Day is this weekend.  And like many, it can be a weekend of mixed emotions for any number of reasons.  For all of us, we all have a father or have had one that we will either visit or remember.  And for many, we are now in that position ourselves, of being a Dad.

This is one of the few photos I have, with me and my father.  Compared with the plethora of pictures I have of my daughters and I, though they are annoyed by my insistence of these memories, it is easy to understand my behavior.  I do not have many memories of my father in my childhood either, a by-product of divorce during the 1960’s and 1970’s.  And sadly, this situation has not changed much at all in over fifty years.

A divorce has always been between a husband and wife.  Prejudices which have existed for decades, discriminating against, and taking away the rights of parents, generally the fathers, are still strong, though a movement has been occurring through the country, finally recognizing the importance of 50-50 shared parenting as being the presumed starting point of custody in a divorce.  But this post is not about slamming the court system, honestly, it would take several to cover everything.  It is not about ridiculing the custodial parent either.  I receive so many messages from parents, fathers and mothers, seeking advice on how to proceed with an array of issues they face.  Again, I could do several posts on their stories as well.  Of course, I will not make any reference to my own situation other than what I have already done, that I am a divorced father of two wonderful children.

I do not know the circumstances of the divorce between my parents.  All I know is I was just a toddler when it happened.  It has been suggested to me, that I should know the reasons, as if that would help me with any relationships that I have.  Um, okay, maybe.  But perhaps it might just make things worse for me, messing with a rabid dog that has been lying sleeping for fifty years.

Instead, at least as of late, my focus has always been on decisions and choices that my dad made, following the divorce.  First, pretty easy to write about my father and my childhood in one paragraph, because that is really all I remember.  I have a memory of a beach and my dog with my dad.  I can remember two visits for soft serve ice cream following a visit.  I can remember the three places he lived after my mom.  I remember a couple of trips to my stepmother’s family farm.  And though I do not know the details of the custody order, I do know, in the beginning at least, I only saw him a few hours, every other Sunday, 6 hours a month.  And he only lived a few miles away.  I have been told he was able to see me in the middle of the week as well, though I never, and I mean never, did.  Soon, even those short visits would even fade away by the time of my teenage years.  And then I threw a gauntlet down at my father, that if he failed to attend my high school graduation, I never wanted to see him again.  He never showed.  I never even received a phone call, which of course was not unusual as I never heard via phone for even my birthdays.

A number of years would pass.  But our paths would cross during a family event.  My father came up to me, and asked if we could talk.  I had nothing to say, but I am always respectful, so I obliged.  He was remorseful for our relationship, though offered no reasons behind the things that he had done, um, rather not done.  He stated that he wished he would have done things differently.  At that point, all I heard was “blah blah blah.”  My past was over.  I had moved on with my life.  But then he asked if we could talk some more, when the timing was more appropriate and less public, even though we were among family.  Clearly, he was looking to establish a relationship with me again.

“Look, I appreciate you apologizing to me.  And sure, we can talk some more.  But you need to understand.  I don’t need a father anymore.  I needed one a long time ago.  I don’t need one now.  But I can always have someone else to talk to.”

My father knew the hurt that he had caused me.  And several years would pass, all the while we did have conversations with each other, but never about the time we lost.  I did not want to hear it.

Tragedy would strike that would change my father and my relationship with each other, and how we looked at each other.  A few nights before Christmas back in the 1990’s, my stepmother was hit by a car, crossing the street.  My father had witnessed the impact.  As she was being cared for, my father reached a crossroad in his life, that finally put us back on the path to being father and son again.

My father had pulled me aside, wanting to talk, I mean really talk, about everything, well almost.  They were having an argument that evening, and had some last minute Christmas shopping to do.  My father left the house, crossing the busy street himself in a huff, from the argument.  She would follow moments later, not seeing the car that hit her.  My father felt fully responsible for that accident, perhaps even more so than the individual that hit her.  And he told me that in those words.  At the least, had he been walking with her, as would have been normal, it would have been him taking the brunt of the impact, and not her.

I wanted to assure him that was not the case.  Our relationship had grown a bit, and we could have regular conversations, though still kept them fairly platonic.  But my father was facing tremendous guilt, and that became obvious, very quickly.  He began to rattle off all of the things that he wished he could have done differently, including my childhood, and just several years earlier, for not being by my side as I faced cancer.  He did not blame anyone else for his decisions, he took all the responsibility himself.  So, other than his evasion of my cancer journey, I know nothing about why he made the decisions that he did.  Only that he made those decisions, he felt he had paid for those decisions, and that he deserved anything that happened to him because of that.

We grew close again.  As I said, I was not interested trying to restore my childhood.  I could never get that back.  And several years later, my father was given an opportunity, to him, the opportunity of a lifetime.

We knew he could never give me my childhood with him back.  But he would get the next best thing, being a “pappy” to my daughters.  I got to see what my father would have been like, by watching the interactions with my daughters.  Sure, he had other grandchildren by that time, but this was about he and I, and turning another page.  My daughters loved him, and I made sure he knew that every day I got to talk to him.

The first thing my daughters knew about him, was the huge porcelain “oreo” cookie jar that was waiting for them, filled with cookies, just bought prior to their arrival.  And there was also the huge fish aquarium that my father had, my daughters were always entertained by those fish.

Again, I have no idea what my dad would have been like as a father.  But as a grandfather, he got those opportunities that he had denied himself.  I had no problem with him “watching” them for a couple hours if I had to do something without my daughters.  But an opportunity had come up, for an overnight visit, which I had never given much thought to.  I just did not see him in that position of more than a few hours, responsible for multiple meals, baths, and bedtime, oh, and entertaining them all those hours.

He jumped at the opportunity, only to realize early in the morning, and I do mean really, small children have their own schedule.  And my younger daughter, known for her lack of sleeping full nights, rather surviving on power naps, had woken up around 4am, found a flashlight, and had begun to patrol his house shining the flashlight all over the place.

I received a phone call that morning, around 6am.  It was my dad.  He asked how my evening went.  I told him I had a good time, and was very appreciative that he watched the kids that night.  I had enjoyed the company of my friends that prior evening, perhaps a little too much, but it was a fun night.  “So, when are you coming to get them?”  My eyes now fully popped open, to see the crack between the curtains showing it was still dark outside.  The sun had not even come up yet.  “Dad, what time is it?  Is everything alright?  Are they upset?”  Then he informed me of my “nightstalker” daughter.  I laughed, and then realized my dad wanted some more sleep.  But he would have to settle for a nap later that afternoon.

Sadly, by the time we had grown so close, not just as best friends, but as father and son, he was diagnosed with lung cancer.  I won’t repost that story here, you can look at my “pages” section for “My Dad Was Just Like Me” or actually watch the story as it was performed live in a stage reading in NYC, by going to Youtube, putting my name and “My Dad Was Just Like Me.”

That second chance that he and I gave each other made a huge difference.  I never married with the intention of getting divorced.  But I promised myself, and my daughters, that I would not do as my father had done.  Our situation is not ideal by any means.  But I do my best to make sure that I have stayed in their lives right from day one.  There are things that I learned from both relationships with my father, I cannot get back the time that I lose with my daughters when I am not able to see them (for whatever reason).  I want to be in their lives.  I want to be their role model.  When it comes to their futures, whether education, career, family, I want them to know that they can count on me for any guidance they want or need.  I want them to know that I love them with every beat of my heart and miss every moment we are apart.

And finally, I want them to be able to tell their own children, of the fun memories that they had as a child with their father.  There are plenty of pictures to show them. 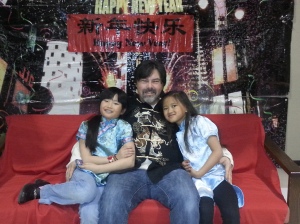 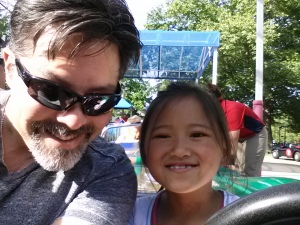 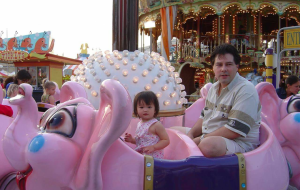 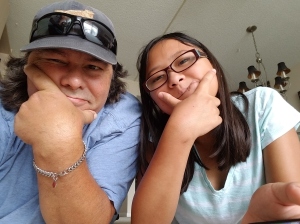 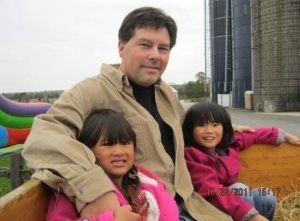 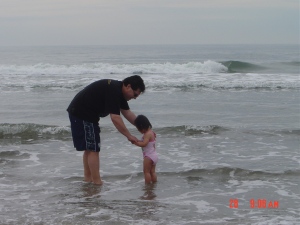 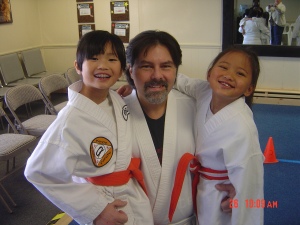 3 thoughts on “My Father’s Ghost”