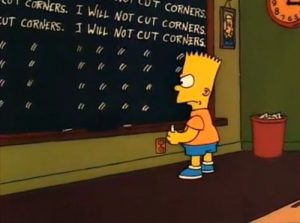 When you think of the phrase “cut corners,” you will normally think of ways to either save time or save money.  And depending on what you are trying to to “cut corners”‘ on, it can be either a good thing, or a bad thing, especially if someone gets caught.  In meeting a household budget, one might decide to do one less night out, or perhaps buy one less treat on the trip to the grocery store.  Driving in rush hour traffic, or late for an appointment, it only makes sense to make a different turn than originally planned, or worse, against the recommendations of your GPS, to either save time or distance. 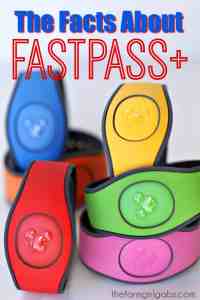 We are an society that loves instant gratification.  We hate to wait for things.  Disney was one of the first pioneers to come up with an organized method to speed things up, or at least make you think you have saved time, the “Fast Pass.”  Think back to elementary school, while waiting in line, and then having to go to the bathroom, we would ask the person either behind us or in front of us, to “hold my spot.”  That is the Disney “Fast Pass.”  You check in for a ride that traditionally has a long line, like hours long, and it gives you a time to come back later, bypassing the line, allowing you to enjoy other attractions at the park.  And as long as you do not mind just walking to all of the attractions you would like to ride, check-in, then return later in the day, this will work out for you.  When it is your turn, you get to go right to the front of the line, without having to wait in a line, like the rest of the other parkgoers.

There are times when cutting corners are a good thing, and when saving time is a benefit.   To expect these attitudes however to apply in all parts of life, is not only unreasonable, but dangerous.

I used to work in an industry  that is heavily regulated.  And for good reason.  It affected people’s lives.  On a daily basis, corners would be cut from allowing proper time to complete a task, training a co-worker properly, to diluting chemicals.  Now probably in many cases, it may not have been a big deal.  In others, contamination risks, more importantly, potency and accuracy may make a difference.

We, my co-workers, were expected to do whatever we needed to do, to complete our daily work assignments.  Often times that meant cutting corners in time and materials.  At times, management even forced these situations when it would come to “time points,” to avoid paying overtime, shifting time points into regular working hours.  Now for those who do not understand that importance, think about a dosage and how often you take a medicine.  How do you think, those intervals came about?  How would you feel if you found out, that occasionally the testing behind those products was not spot on, just for convenience?  You can now see how cutting corners can easily be a bad thing as well.

I was notorious for being a pain-in-the-ass, for refusing to cut corners.  Besides the fact that I did not think it was the right thing to do, my signature went on every document of every task that I completed, and I knew that if something went wrong, it would get thrown back at me.  And I could plead all that I wanted, “management made me do it.”  Who would inspectors take the word of more, a supervisor or a peon employee?  Deep inside, I knew I was doing the right thing, although my peers and management felt differently.  I often found myself not getting certain assignments because daily, it was all about quantity of work getting done, not quality.  But my acknowledgement would come at inspection times.

When inspectors would come onto plant site, that is when I got tasks that I knew were important to the company, and that they were needed to be done correctly and thoroughly.  And with the majority of my other co-workers routinely doing this via “short-cut”, they may not have remembered all the things that needed to be done, or correctly.  All you have to do is look at your local food inspection reports.  If you do not want bad attention, you put your best people on to make up, or cover up what you have been doing.

For me, when I worked, there were no corners to cut.  I was not interested in getting things done the fastest.  And I am thankful that for every nurse, doctor, and tech that has taken care of me, especially over the last three decades, hopefully were not corner-cutters as well.  I count on them to have all the skills necessary to treat the needs that I have.

Today, we are dealing with our worst health crisis, at least in my life-time, and I want to say that I hope that I never see another one.  Over the last fifteen or so years, viruses and outbreaks have become very common.  And we have always been able to respond quickly and with hopefully the least amount of casualties.  But this time is different, there is no cure, there is no vaccine.  We are simply relying on people to willingly do the right thing.  And it is not much that is being asked.  Wash our hands, and social distance, six feet apart.

But, just as co-workers can interfere with a process of prevention or development, we in the public sector are no different.  We have the right people in place for the most part, the scientists doing the research, giving the recommendations.  And the majority of the people are doing their part listening to, and following the recommendations.  Then there are those who feel that their individual freedoms are being challenged, in spite of it being for their safety, for our safety, they will not be told what to do.  Instead, they also challenge the powers to be, to cut corners, and to go around protocols to find treatments and vaccines faster, so that they do not have to be inconvenienced, or lose their freedom.

It is only a select amount of people who feel this freedom is being violated.  And the scientists cannot allow their concentrations to be distracted or diverted from their cause, finding a cure and a vaccine.

We have tons of medicines available to us.  And it is only natural to find multiple uses for them.  In fact, Big Pharm has found these new uses as a way to hang on to a patent to maintain their profit margin.  By the same token, accidental discoveries have also allowed doctors to make “off label” recommendations to help patients be able to afford medicines that might just help their malady.  One example that has led to other uses, sleep drugs being discovered also to benefit for use as a diet drug.

Or one that I personally became aware of years ago, the allergy drug, Claritin.  Only a few years ago did I learn that this drug had the ability to treat certain bone pain associated with neupogen shots for those going through cancer.  These particular shots would accelerate white cell growth, which of course occur in the bones, causing the familiar “growing pains” some of us may have experienced in our youth.  The thing is, this pain does not respond to normal pain meds, nor does it seem to respond to other antihistamines.  A regimen now is often recommended, off-label, of Claritin for this bone pain when going through chemotherapy.

So, why not just have the FDA approve Claritin for that purpose.  Because, we have a process.  It has not been scientifically and officially gone through the processes to be approved.  The cynic in me also tells me that there is not likely to be any kind of official designation, because there will not be any real profit for an over-the-counter medicine.  But, doctors who are aware of this option, will definitely recommend it, and unofficially, I can tell you, out of every cancer patient that has ever mentioned this to me, including my late father, Claritin has done just that.

The frustrating thing for everyone then, during this pandemic, is that we thought there might just have been a drug that is currently used for another purpose, that might help treat Covid19.  Just like Claritin, there was success with some patients that this drug had not just shown promise, but gave hope.  But unlike Claritin, the discovery of this particular drug, used for Lupus and rheumatoid arthritis, and the deadliness of the virus, caused an unprecedented hoarding of that drug, taking away availability to the patients that need that proven treatment for their quality of life.

Like I said, there is not a lot of time with this virus to find a cure or vaccine.  It was only natural to want to push this discovery, but it still needed to be done.  To determine if this drug could actually treat and cure Covid19, it would need to be studied just like every other medication.  But that will take time.

Sadly, because that time has not been taken, scientists have now discovered that the drug, taken in higher dosages, can be fatal, caused by cardiac issues.  These are issues that come up in studies.  There is a reason that we cannot just throw a pile of shit at a wall and see what sticks and say, “THAT’S IT!”.  There are no corners that can be cut.  There is not fast way to get there.

All we can do at this time, while we wait, is follow the advice that we have been given, because for the most part, those of us that have done our part, the statistics are nowhere near what they could have been.  But imagine if everyone had followed the advice instead of feeling their freedoms being threatened.  We could have been done with it by now.

Posted in Cancer, Education, Family and Friends, Inspired By..., Politics, Side Effects, The Heart and tagged Coronavirus, Covid19 | Leave a comment