The Numbness Of School Violence

The phone call is a parent’s worst nightmare.  A robocall from the school district…

“This afternoon, there was a lock down at the school.  A student was observed with a weapon.  Police were called.  The student apprehended.  The lock down was lifted.  The students are safe.”

The message was actually more detailed and lengthy.  It seems that a student had chosen to bring a BB gun into the school.  He was seen taking it from his back pack and placing it in his locker on video surveillance.  Further investigations would reveal two other such weapons.  The student had gotten away with it at least one other time, if not twice.

Sure, the weapons were only BB guns, not normally the weapons chosen for maximum carnage, but there are two other factors to take into consideration.  I have lost count, but this is either the 3rd or 4th “lock down” this year alone at the suburban school.  Another thing that concerned me, it was reported shortly after, that an actual school shooting had occurred in Colorado just miles away from Columbine, where the first notorious mass school shooting had occurred decades ago.

I had only recently become aware of something called “the dark web”.  It is a different section of the internet, known by many of our youth.  Were the situations of my daughters’ school lock down and the shooting in Colorado something coordinated through “the dark web?”  Perhaps not.  At this point, we parents are still waiting for the “why” this student had brought 3 BB guns to the school.  And because I do not know the facts, I am barely refraining from judgement, barely because this was just too close to home.  Because it is important to know, was this the act of just a stupid kid, planning on doing some target practice with some buddies after school?  Or was it a “dry run” by someone upset, to see if he could be successful bringing weapons on to school grounds?

But right now, all we were encouraged as parents to do, was to talk with our children about the day’s events.  I am not sure who this is supposed to benefit.  The worried parents, or the numb students who simply chalk up yet another “lock down” as “just another day at school,” and another day still alive.  Yay.

This post is not about gun control or choice of weapons.  The truth is, that discussion has been going on since Columbine, and even the unthinkable Sandy Hook massacre was unable to bring our country together, let alone our government.

Here is the staggering numbers, as provided by research done by CNN last year, 288 school shootings in the US since 2009 through 2018.  Surely this cannot be a statistic unique to the US.  Or can it?  CNN compared the US to the 6 other major industrial countries who made up the G7, for those who do not know what countries made up the G7… Canada, France, Germany, Japan, Italy, and England.  Here are the numbers:

The countries that make up the G7, are assumed to be the most advanced, democratic (not to be confused with the Democratic party), the most concerned countries when it comes to human rights.  “The United States  had 57 times as many shootings as the other major industrialized nations combined,” was how the headline read on CNN’s Facebook page on May 21, 2018.

Again, I am not making this post about bureaucratic bullshit with excuses like, different size country, different laws, yada yada yada.  The answer often given, need more guns also clearly falls way short as these other industrialized nations do not have a gun inventory problem.  Yet here in Florida, state government has approved a policy to allow teachers to now carry guns in school.  Imagine, they can now carry a gun, when they often cannot get educational supplies.  Priorities.

This post is not about spinning wheels and talking points.  We now have only two other relatively new concepts that may offer some hope, yet one of those is completely unacceptable, because it accepts martyrdom as the solution, in other words, expect a student to die a hero throwing themselves at a shooter.  I will explain.

I was returning home from my visit with my daughters, which occurred just days after this current lock down.  I was at the airport, when I learned my flight was delayed.  As people often do, once realizing we are going to be waiting longer, we need to entertain ourselves to make the time pass.  The unlucky person being chosen to talk to me, just so happened to be a “School Resource Officer.” 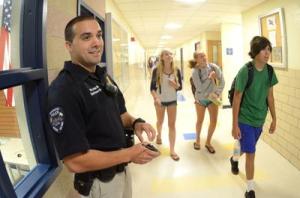 An SRO is normally either a retired cop, or active cop.  And yes, they are armed.  But more and more schools are using this option to maintain safe schools.  Many schools have an entire force of SRO’s.

Having just gone through yet another “lock down” issue, being a former school board candidate who campaigned for safe schools as a major platform, I now had someone who had first hand experience and knowledge of what schools are facing today.  I appreciate that he was willing to talk to me openly.  But the one thing that I notice he did not talk about, nor do the school systems, and surprisingly, you rarely hear parents talk about, is the parental role in prevention.  I will get to that shortly.  But here is some of the conversation I had with the SRO:

Me:  why not install metal detectors?  They are used in courthouses, and airports.  Clearly they would work in schools preventing weapons from getting inside.

SRO:  Detectors are very valuable in detecting weapons.  But you are probably aware of the length of time it takes to go through detectors at courthouses and airports.  You are talking about thousands of children needing access, in time, to start the school day.  You would have to have students arrived hours before the start of day to get through the entrance.

Me:  One comment I heard on social media, was criticism of the students hiding, and in this case, for basically nothing more than BB guns.  Of course I told the asshole off, clearly not a parent for expecting a reaction to have been different without knowing if a real threat or not.

SRO:  In recent years, the best option considered for active shooter drills have been “run, hide, fight.”  Kids would secure themselves in their classrooms, hopefully out of view of the doorway, out of the risk of being hit by gunfire.  But in all honesty, at this point, the children become sitting ducks when they do this.  If the shooter is in the school, the thing that makes sense is to get out of the school as quickly as possible, away from the shooter.

SRO:  There is a new concept, an option called “ALICE”, which stands for Alert, Lock down, Inform, Counter, Evacuate.

It was when the SRO explained to me how ALICE worked that I realized what we have now put our children in a position they do not only not deserve, but should never be put in that position, of being a hero, taking a bullet for another classmate or more.  The philosophy is simple, better to lose one student, than many more.

SRO:  The first three steps that initiate with ALICE are basically the same as run, hide and fight.  But it is when you get to the point after “Inform”, “Counter” that the shit will get real.  Counter means no more hiding, the students keep running.  But someone must make the decision to counter, attack the shooter.  And if it means taking the bullet, to prevent other students from being killed, that student has done a heroic thing.

To say the conversation was enlightening about assumptions that I had even made how to solve this issue, it is extremely heartbreaking to know that we are now at the point where we expect our children to sacrifice themselves, just because GOD DAMNED ADULTS REFUSE TO DO THEIR FUCKING JOBS AND KEEP OUR KIDS SAFE!!!!!!!!!

I ran out of time to continue our conversation, because it was my next question that probably could have offered a dialogue that could give ideas that have not been tried, and the one source that has NEVER been considered.

Me:  Why don’t we hear about parental involvement when it comes to these events?  I mean after all, there are always plenty of excuses from ignorance, to lack of time (no excuse if you are a parent, you make time for your child).  If this child at my daughters school is hurting, the parents surely need to know something.  And at the least, the parents of this child have failed in enforcing the fact, bringing weapons to school is unacceptable.  Why are parents being held accountable?  As is a possibility in the recent Colorado shooting, bullying and other offenses may have played a role, why are schools still not “zero tolerance” when it comes to bullying.  We have lived over and over and over, events culminating in violence just because bullying was ignored.  We are zero tolerance for weapons, why not for bullying?

SRO:  I really wish we could keep talking.  Your question is so spot on.  But the truth is, as long as there are lawyers willing to fight for the rights of the student and their education, parents would rather pay a lawyer to get their child out of the jam, rather than deal with their inefficiency of their parenting skills.  I know it is harsh, but too many parents have the “not my kid” syndrome.  So until we deal with parents, and making no excuses, because it takes less time to deal with your child, than it takes to make excuses why not, and to deal with the after effects of tragic decisions that get made.

And with that, the SRO left to board his plane, to see his children.  I know many other SRO’s in my life.  And I am very active with my daughters educations.  I am still in communication with the school district that my daughters attend.  It is my hope that some day, we will find that the answers to these school shootings and violence will come from where they start, with the student themselves, possibly at home, possibly at school.  We are wasting time arguing over gun rights and safety, which honestly I do not ever expect that argument to be solved in my lifetime.  The question is, how many more school shootings will there be before something is done.  Sandy Hook should have been the last one.  And we are no closer to solving anything than we were then, or Columbine.  The only difference is, now we are expecting our children to take a bullet, and are children get through their day as getting by without getting shot today.

Why does the record of the US with school shootings stand out compared to those other countries?

Posted in Adoption, Bullying, Education, Family and Friends, Inspired By... and tagged lock down, school shooting