Are We Ever Going To Try? 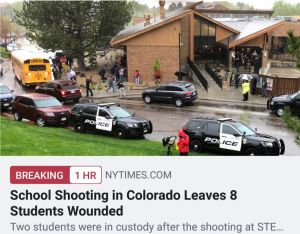 Two headlines today.  One in a town of Pennsylvania.  The other occurred just miles away from the site of another massacre, decades ago.  The difference for me with this post, is one of these headlines affects me personally.  And really, it should not matter which headline it is, neither should have occurred.  But they did.  And as of this post, the Colorado shooting has now left one teenager dead, with 7 wounded.

Like many parents, I got the phone call this afternoon from the school district, announcing that the school that my daughters attend, had been in “lock down.”  Most of us have no idea what is involved in this condition because we do not get to see it, that is, unless you have seen the movie “8th Grade,” or seen it explained during a news telecast.

The recording came with details, that a student clearly between the grades of 7 through 9, was on security camera moving a BB gun into their locker.  Security, unable to determine the type of the weapon, acted swiftly, instituted the lock down, and notified the local police.  The student was apprehended, all students were declared safe, and the lock down was lifted.  It was later discovered that additional weapons had been found during search.  But the bottom line, a major crisis was averted, and even though the weapons may have been of the caliber of a BB gun, the fear and panic that could have resulted, could have resulted in tragedy itself.

In Colorado, the assailants entered the school, deep into the school, eerily it seems similar to Columbine, wounding several, now officially killing one teenager.

This post is NOT about gun control.  We all know that neither side of the argument is not going to go anywhere with that discussion.  The slaughter of children at Sandy Hook we all swore would finally bring us to the point that we had to do something.  And our country failed.  Again and again and again.

I have some experience behind the scenes with the school district that my daughters attend.  I know the efforts that are taken to secure the safety of students.

I campaigned as a school board candidate the year of the Sandy Hook massacre.  That tragedy was actually one issue that all candidates agreed on, that needed to be dealt with, at all costs.  In fact, later that year, the district held a forum to inform the community and families of the efforts the district took to makes sure students were safe.

Personally, at the time, my daughters were in elementary school themselves.  Of several things that I learned while campaigning, attending school board meetings, and attending “safe school” committee meetings, I learned of the evacuation plans, mustering plans, but also something else, that needed to be dealt with immediately, the access to the building at the main entrance.

Many schools today, hopefully all, have electronic entrances, you need to be “buzzed” in once identified, while all other doors remain secured.  The problem with my daughters elementary school at the time, the monitor used to view the person entering, was of such poor quality and small size, the person would have to be admitted pretty much on an honor system.  And by then, our school would have been at a similar risk for tragedy.  This was one of the first things addressed and corrected.  The fact is, the district has taken many more steps to secure our schools and keep the children safe.

The technology worked.  The trained staff acted accordingly with swift response.  Local authorities responded within minutes.  The suspect was apprehended.  Everything worked exactly as it should have, and without tragedy.

Yet even with everything we, as adults know, about the efforts to keep our schools safe, there are still certain students, in spite of methods to intercept weapons, still attempt to bring them into the schools.  And yes, with a BB gun, fatalities may not have been likely, but definitely harm could have been done.  And because our district has done all it can to prevent, plan, and respond, that means the rest falls on one other entity, the parent.

In my years of campaigning for school board, and since, the one thing I hear no conversations about, are what can parents do to prevent events like this.  There is always ridicule about the parents on Facebook or news stories and what they should have done, followed by defenders of those same parents snapping back that we do not know what their home life is like.  And there it is.  The only one who knows what is going on in the home, is the parent.  The parent is the one who needs to be aware if their child is emotionally hurting.  The parent is the one who needs to know about weapons that their child may have access to.  And this final thing should not be that hard to do, the parent needs to explain, on a regular basis, that it is wrong to bring any weapon, toy or real, to school.  The parent needs to explain the consequences for making such a horrible decision.

Yes, parental accountability.  It is the one thing that has not been discussed even 10% as much as gun control is raised with each school shooting.  The districts do what they can to keep our children safe.  Local law enforcement trains to respond to active shooters at schools.  But the only ones having no part in this conversation, are the parents themselves.

And I would encourage every parent to attend a school board meeting, and raise this issue.  As the deputy sheriff in Colorado stated basically that the area and school is low crime, a good place, also known as “won’t happen here town”, it can happen anywhere.  And while my children, along with their classmates followed orders during this lock down, not knowing if it was a life or death situation, I should not have to keep having these “after it happens” conversations just because parents do not want to talk to their kids before it happens.

I am relieved that today was resolved without anyone being hurt.  But my heart aches, for yet another school shooting that did result in injuries and death.  Time for the parents to be a part of the safety plan.