It Was Official… 30 Years Ago Today 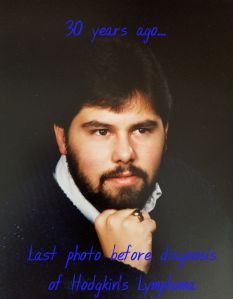 30 years ago, I was diagnosed with cancer, Hodgkin’s Disease… now called Hodgkin’s Lympoma.  I guess they wanted the cancer to sound less scary.  For the last several posts, I told about the thought processes and denials I went through, as not one, but more than a half dozen medical professionals tried to convince me otherwise, that a healthy 22-year old with everything going for him, had his entire life turned upside down.

I had a doctor appointment on the Monday evening after Thanksgiving, following my work day.  I was returning back to the doctor that my friend Stephen sent me to.  Again, not sure as to why I had not returned to my own doctor at this point.  Just as the evening when I went to the hematologist, the weather was typical northeast nasty rainy and damp.

There was no handshake when the doctor came, no idle chit chat.

Doctor:  The results from pathology confirm what we suspected.  You have Hodgkin’s Disease.

I heard the words, and I could not deny them.  And it was from that moment, that not only my life would change, but how I handle adversity.  My emotions were now turned off.  I should have been upset, freaking out.  But I was calm, focused on every word the doctor was saying.  I guess if there was one improvement of my life, it is the way that I handle crisis when faced, because I face each and every one the same way.

The doctor explained to me that I was going to need an oncologist/hematologist.  He understood that my reaction to the last one that he sent me to, would make it impossible for me to return.  I do want to make a side note here… I did see this doctor again later on in life, in passing of a hallway in the hospital during one of my later stays twenty years later.  He knew right away who I was.  More importantly, I got the opportunity to apologize for my boorish behavior.

At least I knew in advance, that when I made the decision what doctor I would be seeing, I knew what an oncologist and hematologist were, cancer doctors.  Three decades ago, as long a time ago as it is short, there were hardly any success stories when it came to cancer.  But I did have one that I could look to.

Two years earlier, my grandmother had beaten breast cancer.  She was still with us, so clearly, he could save my life.  It was a no-brainer, I will see her oncologist and he will save my life.  I told the doctor that I would make that appointment as soon I spoke with my grandmother to find out what his name was.  And I did apologize to this doctor as well for my stubbornness, that I knew he meant well.  The doctor told me he understood how I must have felt at the “sucker punch” that I received.

Once I got to my car, started the ignition, turned on the windshield wipers and headlights, I went to grab the gear shift to put the car in drive, and my hand just dropped to the floor of the console.  My body was overcome by a numbness.  Just moments ago however, I was calm and collected.  But now it was hitting me.  I had cancer.

I must have been sitting idling in my car close to a half an hour when I finally came back around.  Finally getting my composure together, I started to think of what I needed to do next.  Call my grandmother for the name of her oncologist.  Shit!  I have to tell my fiance.  We were supposed to get married in six months.  Somehow, as I could feel another rush of emotions about to come out, I pushed them back and continued to think how I needed to approach everyone, but I also had another issue I had to think about, my employment.  I cannot explain how I rationalized it, but as I put the car in drive, and began the drive back to my apartment, I drove by my place of employment.  Lights were still on in the office area of the store.  I pulled into the parking lot.  May as well take care of this while I am here.  Little did I know, the emotional need this detour to telling my loved ones would meet and help me prepare.