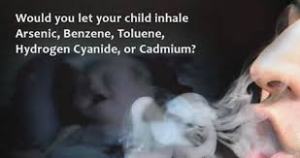 If you are reading this post, I would certainly hope not.

If you are reading this post, I would certainly hope this offends you.

Only until the turn of the century has attention been paid to this issue.  Admittedly, some of us who are a little “long in the tooth”, recall days of riding in the backs of pick-up trucks, sitting in the old station wagon in the back seat which faced the rear of the car, and of course, riding in the front seat with no seat belt on.  There are many who would argue, “we turned out alright, right?”  Sure we did.  But times have changed in regard to traffic and relying on other people’s driving skills.

But one thing that unfortunately still exists, and as I witnessed recently, is an adult smoking in a car with a child in it.  Now while the age of the child should not make a difference, admittedly I was more enraged because the child was a toddler.  Sure, back in the 1960’s and 1970’s my parents (all 4 of them – I had two step parents), smoked while I was in the car.  I did not like the smell of it, but I was just a kid.  My opinion did not matter.

But something happened once we entered into the new millennium.

As it became more and more apparent as to the dangers of second hand smoke, finally the concern for children was being raised by some lawmakers, which was not coming from the parents by the way.  But think about it, and this is not a lecture for someone who wants to smoke, but we can all agree, smoking causes cancer and other awful end-of-life issues.  And those who smoke, chose to begin willingly.  As for being able to stop “any time they want”, well the tobacco companies and lobbyists have done their best to make sure that smokers do not stop.  And with the popularity of vaping increasing, even amongst “new” smokers who simply took up electronic cigarettes because they have been lied to that e-cigs are not as dangerous, again more lies.  But bottom line, adults make the choice.  And as an adult, I can make the choice if I want to stand in the direction of second hand smoke or not, or be in a vehicle when someone is smoking.  A child cannot.  A child is never given the chance to say, “no”.

A child in the back seat of a car has NEVER made the choice that it wants to be subjected to second hand smoke, or begin their first risk towards lung cancer and heart disease.  But the fact is, in spite of knowing everything we know about second hand smoke, and as much as a parent may claim to love their child, some love their cigarettes more.

If someone spanked a child, society would be in an uproar yelling “child abuse”.  And not to take it lightly, under normal circumstances, a spanking might just leave a minor red mark on the buttocks.  But why is it that we do not charge a parent with child abuse for smoking within the vicinity of a child?

Because, whether a lifetime smoker, or someone who has just picked up the habit, the attitude is always the same, “won’t happen to me.”  My dad smoked with half of his lung removed for lung cancer, and through his chemo and radiation therapy until the day he died, still in denial, “I didn’t think it would happen to me.”  Parents have many rights with their children, but subjecting them to something so toxic, and deadly, is not one of them.  So unfortunately, we now have laws created to protect our children.  Of course that does not mean that they law will be enforced, or even prevent a parent from smoking in the car with a baby (of course the window was open to allow the smoke to exit the car – because there is no way that any smoke reached the back seat…right?).

I will not sugar coat it.  Smoking in front of a child, is two forms of child abuse.  Physical because the child is exposed to the second hand smoke which will put the child at risk for lung cancer in the future.  Emotional, because our children are taught that smoking kills.  My daughters know that their grandfather died directly from smoking.  Imagine how upset they are when they see even a stranger smoking a cigarette, a cigar, pipe, or vaping.  My daughters have seen first hand, that people die from smoking.  And I will not just limit it to the car either, because even if you are at an outdoor picnic, on a porch, anywhere you can smell a cigarette (or any other product), that means you are breathing it in.  Just because they are not in the direct stream of the smoke, does not mean that they are not being exposed to it. 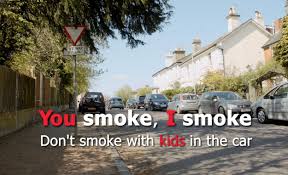 We should not need a law to protect children from smoking.  But we do need to protect our children who have no say when they are exposed to something so deadly and addictive.  Exposing children to second hand smoke is child abuse.