At least twice a year, we experience this superstitious day.  For many the fears are quite real.  Being careful not to let a black cat cross their path, not walking under ladders, breaking mirrors etc..  And if I looked back through time at all the Friday the 13ths I have lived through, I am sure I could find days that had bad things happen (my parents in a car accident in the early 1980’s for one example).  Personally I do not even know the day has occurred, unless I become aware by all the memes on Facebook.

But if you say “Friday the 13th” to many people my age, memories of Jason Voorhees and one of the most popular cult slasher films comes to mind. 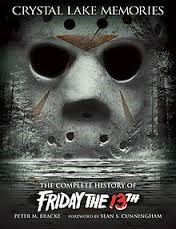 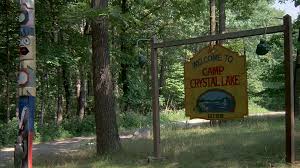 Make no mistake, watching it for the first time (the original, not the campy remake – no pun intended), it scared the crap out of me.  Spoiler alert, boy drowns at summer camp because camp counselors were having fun, he comes back from the dead, and every movie from original to sequel, he kills everyone except for only one person who appears to be the hero, only to come back in the next edition.  This franchise got so stupid that it felt the need to include Freddy Krueger (Nightmare On Elm Street) and even have Jason killing in space.  Just plain stupid.  Face it though, Jason’s mask is iconic and will forever be affiliated with Friday the 13th. 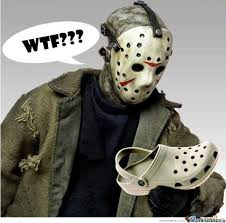 Come on… you just laughed when you saw this picture.  And I actually do have a “Friday the 13th” story that I can actually laugh about.

Around 20 years ago, I had gone camping with friends in a very family friendly campground in northern Pennsylvania.  Our first night, with the full moon brightening the entire campground, we all decided to go for a walk.  The path started as macadam (road surface) and then changed over to gravel.  We were laughing quite a bit, and then it hit me, the set up would be perfect for Jason to just jump out at us and slay us all because he died when everyone else was too busy having fun.

My friends laughed a little, one a bit uncomfortable as I evidently struck a nerve.  Even our feeble effort to chant “ch ch ch ch… ah ah ah ah met with a little resistance.  We continued walking as few more yards and we could see the camp’s lake up ahead, lit up beautifully by the full moon. 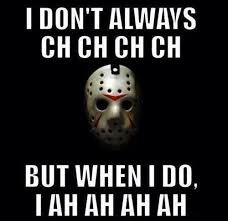 Unbeknownst to any of us, there was a bunch of kids hidden back in the woods who had a plan, and had actually been thinking along my wavelengths.  No sooner had we settled down about the whole “Jason” thing, two of them jumped out of the brush screaming horrifically at us, meant to terrify us.

At that point, I realized two things.  Number one, I was the sane one who does not scare easily, let alone believe that this could have even had the chance to be real.  Number two… who my friends really were and what I meant to them.  They all turned tail back towards the campsite, leaving me behind to meet an untimely fate with what they believed could have been a deranged mass killer.

I stood there with my arms folded looking at the very creative kids, and congratulated them on their skills of terror.  But I also warned them that their prank could have ended horribly if someone got hurt while running away, or worse, one of the pranksters meeting up with someone who might have been prepared to defend themselves.  A sudden adrenaline rush is nothing to mess around with.  Be that what it was, I told them the prank was a good one.

As for my friends, it was the last time I ever went camping with them.

Posted in Family and Friends, Inspired By..., Recreation | Leave a comment