We cannot argue, we would all much be better off if we ate right, exercised right, slept right, and so on.  And we all at one time or another have made excuses at to why we do not.  We blame ourselves, or we blame other sources.  The television commercials that somehow allow us to smell the mouth-watering aromas of fast food, ignoring the blatant warnings of addiction and death prior to the first cigarette, not having enough time to get out and at least take a walk because we do not want miss tonight’s award show, are all just excuses.

I am the world’s biggest hypocrite when it comes to eating healthy, getting enough exercise, and definitely getting enough rest.  I also make lots of excuses.  And that is really what they are, simply excuses.  And I hide behind a very big excuse, which should actually be a reason all the more to do something to lead me to a healthier life.

Waaaay back before I was even diagnosed with cancer, I knew that I needed to take good care of my body.  Now, notice how I wrote that, “I needed to take care”.  I did not write “I should have taken care.”  If I recall, my weight was fairly healthy at around 140 pounds, and I was in fairly good shape, constantly active playing recreational sports.  I did not eat the best, a combination of economics and taste (I wrote a post last year about being finicky like Morris the Cat).  But I knew, my family on both sides had histories of obesity, diabetes, and cardiac disease.

But then I was diagnosed with Hodgkin’s Lymphoma.  One of the strangest side effects I had, was a weight gain of nearly 60 pounds, courtesy of the high doses of prednisone I took to counter some of the effects of the other chemotherapy drugs.  So, it was only natural, that I get right back on the “horse” and drop that weight.  I lost all of the weight through dedication to the gym, daily, and a very strict diet – okay, the best I could do with not liking vegetables.  The weight came off in less than half the time it took to gain.

Unfortunately, what I did not know, is that my thyroid had been reduced to basically nothing, and was barely functioning, which meant my metabolism was not working properly – this due to the radiation therapy I recieved.  You guessed it, the weight started creeping back up, and in not time, my weight had returned to the weight I promised myself I would never let happen again.  My doctor ordered me to take a synthetic drug to make my thyroid work, and ironically at the same time, told me not to expect any major weight loss (which really sounds weird since if the thyroid worked properly, which is why I was told my weight creeped up, my weight should get under control).

So over the next many years, I just went through the motions, exercising when I chose, and well, whatever… when it came to my diet.

In 2008, another bomb got dropped on me, when another more serious issue developed again because of my treatments earlier in my life.  I had to have emergency heart surgery, again due to the radiation damage.  So as I was recovering from this surgery, I was being asked to keep two things in mind, diet and exercise.  I will get to those in just a second.  My first concern was rehabilitation.  I just had my chest cracked open, which means that the surgeon went through chest muscles.  I had a laparotomy during my diagnostic stages for my Hodgkin’s, had my abdomen cut open, and received no rehab to learn to strengthen my abdomen muscles, which clearly led to many issues physically for me.

Let me tell you, I was shocked when I asked about receiving physical therapy to recover from my open heart surgery.  I knew I would have issues with the breast bone healing (due to the radiation issue), but I never expected to feel as completely fatigued as I did the first time I got to my feet.  And then of course there was the issue of dealing with my heart which was now getting the proper flow of blood which it had not been for so long.

I was told I would not need PT because I was only 42 years old.  I would be fine.  Forget that my insurance was willing to pay for it, the surgeon and cardiologist did not feel it was necessary.  Within a couple of months, I would have my care transferred to a hospital network that required me to have physical therapy, because it had been determined not only for the benefit of the heart surgery, but due to the neglect from the abdominal surgery, and the physical damage that I had received from all of my treatments, recovering from the heart surgery was amplifying many of my physical struggles.  But within no time at all, the effects of not having physical rehab following my heart surgery were obvious.  My shoulders began pulling forward, as if hunching over, because I was afraid to stretch out my tender, repaired pectoral muscles.  Issue with supporting my head, protecting against something called “drooping head syndrome” also began to accelerate from the combination of radiation damage, and the pull from my chest muscles.

I finally did get into physical therapy.  Actually, I had to repeat it three more times.  I will not get into the rehab points in this blog, they are a separate issue.  I wanted to state that I had finally gotten to a point where I was functioning again, though with restrictions ordered by the doctor, but by all means, there would be no excuses anymore for me not taking care of myself.  I needed to improve my diet, reduce my stress, and get some form of regular exercise. 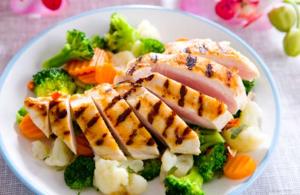 It has taken some time, but recent events over the last  year or so, I am finally eating smarter, not to be confused with healthier necessarily.  I am still a very picky eater.  But my portion control has been so improved from learning to cut portions in half.  It used to be that I would smother any vegetable in any condiment just to make sure I did not taste or feel the texture.  I have a ways to go with choices, but at least now I will eat vegetables.  I will not order them, yet, but if they are on my plate, I will eat them.  It is a start.

Exercise has always been tough.  Of course you get the warnings, consult your physician before… yada yada yada.  I have a lot of physical issues that have developed over the decades between my treatments, surgeries, and recoveries.  So I do have a lot of restrictions that I must adhere to, to make sure that I do not cause any more muscular damage, spinal injury, or even cause any cardiac event.  So, at 49 years of age, I will never look like Atlas.  But there is no reason, that I cannot do a simple task, walking 20 minutes every day.  And generally I do this.

I have enough strikes against me health wise – family history, my own medical diagnoses – without making anything worse.  It is in my best interest to keep my stress to low limits, give my body enough rest, exercise, not smoke, and eat properly.  To be honest, I am not sure if I would be as diligent as I am today, if it were not for the support I receive from a professional dietician keeping an eye on me, and the tremendous support I get from those closest to me.

I cannot do this alone, and knowing that, is what is making the difference this time.

Posted in Cancer, Education, Family and Friends, Food, Inspired By..., Recreation, Side Effects, The Heart