Is The Dog Walking You?

I was out last evening for my usual walk, okay, I officially call it my exercise.  There must have been a special event nearby, because last evening there were a lot of dogs being walked.  There were dogs of many breeds, but as no surprise, the most numerous in attendance, were Golden Retrievers.

Of course the idea of any exercise is to keep active, but I could not help it.  These furry “speed bumps” (speed bump defined as something that slows you down…lol) immediately stopped me in my tracks.  There were blonde, rust colored, puppies, and old-timers.  No matter what variety, any pet contact that a person can have, will have an immediate impact on your mental health for the better (unless you are one of the unfortunate people who have legitimate fears of animals). 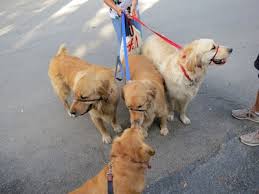 But it was the action of one of the Goldens that caught my eye, and triggered a happy memory back to my Pollo, my fourteen year old Golden that passed away a little over a year ago.

Pollo was known to everyone as “the happy Golden.”

He enjoyed all kinds of attention and showed it by this endless smile he always wore.  He was always pleasant whether at home, at the vet, or at the groomer.  There was just one thing that annoyed him, being on a leash.  Let’s face it.  If you are a dog owner, none of us want our “best friend” to be tied to a leash.  Dogs are meant to run free.  But unless your dog is 100% trained and compliant, all it takes is one simple distraction, like when I yelled “squirrel” to Pollo and he would race to the patio door to survey the yard for little furry varmints.  It would be at least two to three minutes before I could get his attention again.

I saw Pollo’s disdain for the leash on two occasions.  And both were before his first birthday.  The first was during a house party, with people entering and exiting our house, Pollo being a social fur friend, wanted to be included in the party.  He was friendly enough so there was no reason not to.  But to allow people peace and be able to eat, I tethered him to our huge shade-providing maple tree.  Of course he would never yank on it, I had him trained to be on the leash.  Instead, he simply chewed through the very thick nylon rope and then proceeded to receive lots of yummy treats from my guests.

The second time occurred when I was getting him groomed.  While dogs are being cut, or dried, or whatever process they are involved in, dogs are often secured with a leash, not only for security so the dogs do not jump from the grooming table at the sight of another animal, or curious on-lookers, but in case the groomer needs to step away.  And it just took less than two minutes for that to happen, Pollo chewed threw a thick leash, almost an inch wide, and was enjoying his solo tour through the grooming salon.

Yes, all it took was for me to see one of the dogs last night, carrying his own leash, walking his owner.  And for that time, I benefited more from some pet therapy, than physical exercise.  I walk because I need to take care of my heart and my lungs.  But the stress that I deal with on a daily level can be more harmful than the conditions that challenge my physically.  And by thinking back to a happier time, that stress was gone for quite a while last night.

Posted in Animals, Family and Friends, Inspired By... | Leave a comment