I first saw the movie “Kramer Vs. Kramer” starring Dustin Hoffman and Meryl Streep when I was a freshman in high school. It was about a man who was divorced and had to fight for custody of his son. As a child of divorce myself, though I was quite young, three years of age, I was pretty much shielded from the nastiness of divorce that was demonstrated in the movie.

Earlier this year, I saw another “divorce” movie, called “ACOD – Adult Children of Divorce”. It was a dark comedy about a child who unbeknownst to him, had been part of a study on the effects of divorce on children. He is then enlisted as a participant in a new study as an adult which only reeks havoc on the entire family. There were quite a few times that I did chuckle, but honestly, it is hard for me to find anything even remotely lighthearted in my current divorce situation.

The truth is, unless you have been through a divorce, either as spouse or child of divorcing parents, there is really no way for you to understand the complexities of emotions involved in a divorce.  I have heard many judgmental comments from both friends and family. Judgments come because people do not have facts or statements from the people involved. Let us be honest here. The divorce process is between the two spouses, not the friends, not the family, and not the children. As an outsider, you will hear only what each side wants you to hear. And as far as I am concerned, what I feel you need to hear.

But the biggest human flaw that I possess is that I do care about what people perceive about me. I have spent my entire life defending myself against bullies and those that tried to sabotage parts of my life. The divorce process is a bit more serious, especially in my case, because my divorce involves children. As I have said in previous posts, I am not going to discuss the exact details of my case, but I will shed some light as to some of the thought processes that I have made. In particular, child custody. 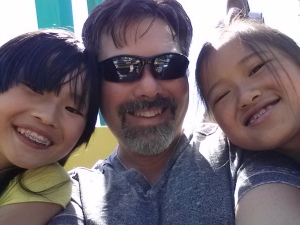 Anyone who knows me, knows my children mean the world to me.  Which is why so many were shocked, when many heard the custody arrangement that was not only agreed to, was actually created by me.  The main reaction was, “Oh my God, how are you going to do without them?”  Believe me, it was not an easy decision to make, but one that I believed was going to be in the best interest of my daughters.  It was going to be an arrangement that I felt would give them quality visits with me and allow us to be father and daughters again.  To me it was not about how much, but rather what was it going to be like.

There are circumstances that I will not go into right now, because the process is ongoing, but with what I knew about the system, parents today will most likely share custody of their children, 50-50.  But as factors of my divorce were occurring on a daily basis I had made a decision that there was a likelihood that I would look to start my life over, and it would be out of state.  Needless to say, it has complicated things for my attorney, but it is still a decision I believe is the correct one.  A “shared” custody would not work between states because of both children are still in school.  Both of us had wanted full custody, but only I was the one being realistic that neither of us would get that option.  Which means that it was left up to me, to come up with some sort of idea.  But just as anything else I had come up with, was objected to with the attitude to let the courts decide.

And so was at court that I made the same suggestion of time with my daughters.  I sacrificed a lot, for what I felt was best for my daughters, what was going to give them the best quality of time spent with me.  I surrendered all holidays, but instead, asked to spend time with them during the rest of the time off of those holiday weekends.  But for two weeks over the winter break, and seven weeks during the summer months, they would travel to be with me.  And here with me, there would be no signs of divorce activity, no negative comments being discussed, and definitely no tension on my part.  They would get to spend time with me as “daughters and Dad,” something that had not happened in well over a year because of the divorce process.

To be honest, I have heard my share of criticism, and I understand where it comes from.  But for those who have offered that criticism, they do not understand what went on inside of our house as we kept our lives fairly private.  Yes, our daughters had already been through enough tragedy in their lives having been adopted, with basically no opportunity to ever know their biological parents.  But to argue that my ex and I should stay together for the sake of not making the children go through more difficulty is definitely the wrong thing to do.

From the time the divorce was announced, both of our attorneys had made the recommendation to remain in the house so as not to be accused of abandonment.  And so, that is how it was for nine months.  But the animosity and tension built every day.  We could no longer be in the same room with each other as the tensions built.  And the children witnessed this.  There had been several attempts to save the marriage, but it was clear during this nine-month period, it was never going to happen.  And to keep the children in this environment, was far worse to do to my children.  As they say, “better for children to be from a broken home, rather than to live in one” (from the movie Airport 1970 – Dana Wynter).

And so, my first visit with my daughters was ironically during Father’s Day weekend.  And I spent the entire weekend with them assuring that things were going to remain pretty much normal for them if not even better.  Mom was going to always be Mom and I made sure that I told them frequently how much their mother loved them, and Dad was always going to be Dad and I was always going to love them.  The children were going to get to have twice as much fun in their lives.  Most importantly for me, I was going to shield them from as much of the divorce and ugliness as I could.  While they were with me, all they were going to deal with was once again, being able to spend time with me.

A month and a half later, I travelled to pick up my daughters, and bring them to my new home for the majority of the summer.  A wave of emotions came over me.  I was finally getting to spend quality time with my girls again.  There were no thoughts of pending divorce proceedings.  Some made reference to it being a “vacation” for the girls.  But the girls would be the first to tell you, “it wasn’t a vacation.”  Just like a couple of years earlier, I had them working on study books all summer long which kept them in condition for when the school year would begin.  The girls also had some simple chores to do.  And yes, we did have a lot of fun.

But what the girls came away with as I returned them home was this, both of my daughters know, they have a home with their mother, and a home with their father.  As my oldest put it, “we have two places to live”.  And she says it so proudly.  There was no negativity of the divorce while they were here.  They were able to “see” their mother every day (just like I do when they are at home) via video calls.  This is a critical tool to have that parents did not have years ago to deal with absences.  From the time that I took them home, it will be over three months before I get to spend time with them again.  And I will not lie, my heart aches for the lost time.  I know I will miss certain events in their lives.  But seeing them every night and talking to them, helps with that pain.  And I do believe this was the best arrangement for them, as to avoid having them exposed to everything that has come up, and will come up in the divorce.  I have done what I can to make sure that sure that my daughters who are children, only have to deal with childhood things.  The rest is up to everyone else. 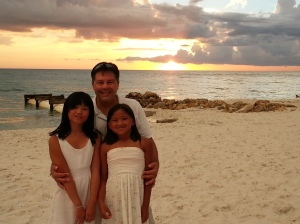 Posted in Adoption, Family and Friends

2 thoughts on “Spouses Divorce, Not Parents”