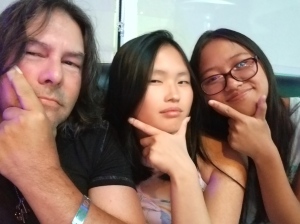 Ask anyone who knows me personally, and they will tell you that I think of my daughters all of the time.  Whether they were at daycare, in school, at a friend’s house, or in between visits, my mind is always going.

There are things that they have witnessed as children, they still have not taken the time to grasp, if they even will at all.  I have been completely open with my daughters that their questions should be answered.  And likely, there will be doozies that they were involved with, from issues related to the divorce, to their adoptions.

In the meantime, their lives have been spent with me making sure that they grew up with basic values, respect, trust, love.  It was important that they not only learned right from wrong, but why it was so.  I taught them that nothing that they succeed in, can come at anyone else’s expense.

The last several years, have been spent learning about prioritizing, time and money management, thinking about… THE FUTURE!!!!  Not to make the mistakes I made growing up.

The one thing that has been consistent?  I have let my daughters know, every chance that I get, that I am proud of who they are, and the things that they have done.  Of course, now older teenagers, when I do this, there is a response of an eye roll so bad into the backs of their heads, it produces a crashing sound of thunder.  Have I done it so much, that it has lost meaning over time?

This weekend is the first opportunity for the SATs in 2021.  As a rule, I loathe standardized tests as too much time in schools is spent teaching to take those tests.  But the SATs are different.

I do not remember that much about my first, and only SAT.  That was almost forty years ago, YIKES!  I had no prep.  I had no PSAT for practice.  I knew of no other opportunities to take the SAT again.  I had no guidance.  I was on my own.  This is referred to as “the school of hard knocks.”

My Dad was not there for me, most of my childhood and that was the way most of my life went, without all of these influences and needs being met.  There were no examples laying before me or any kind of playbook on decisions that had to be made with my daughters.  I raised my daughters the way that I wish I had been.

I cannot imagine the kind of student, or teenager I would have been, had my Father been as much of an influence as me with my daughters.  I was not an “eyeroller” because I just did whatever the Hell I wanted.  I was unsupervised.

All I knew was, my daughters were going to know that I love them and care about them, unconditionally.

Learning from my past, my older daughter heads into her first opportunity with the SAT, understanding that she is going to take the SAT at the minimum a second time.  She has had tutoring to help her along the way, with a huge study guide, and an on-line study program.  She has taken the PSAT (practice SAT) twice.  In other words, unlike I did forty years ago, just showing up on a Saturday morning to take the SAT, my daughter is as prepared for the SAT as she can be.  My younger daughter is just behind her at the PSAT level.

And yes, cue the sound of the “eyeroll thunder.”  I am proud of them.  And I will let them know it.  I am pretty sure that my older daughter would make a great poker player, as she never shows her hand when it comes to nerves.  If she is nervous about this weekend, she is not showing it.  She never has.  It is that one final thing that both have been taught, in the end, she did her best.  And whatever score she gets, that was her best.  If it needs to be better, she will work on it.  But for now, she gives her best, does her best.  It is her best.

Good luck to my older daughter this weekend.  I know you will do well.

Posted in Adoption, Animals, Education, Family and Friends, Inspired By... | Leave a comment