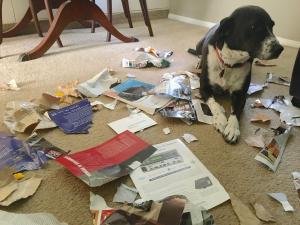 We know when we have done something wrong.  We also know if what we did that was wrong, was intentional or by accident.  Sometimes, something wrong may happen and we have no idea why.  But whether we recognize what we did, or whether it has been pointed out to us, under normal circumstances, we know what happened was wrong.  We feel bad.  Our conscience reminds us that we did something wrong.  And then hopefully, we can correct what has happened, apologize, and move on.

There are jokes and memes all around about different types of guilt from “Jewish mother” guilt, Catholic guilt.  There are more serious forms of guilt, such as those who commit crimes or other harm to people.  Guilt can be either healthy or unhealthy, depending on how you let it impact your life, especially if you cannot, or will not let it go.

This was a picture that I never thought I would see.  Estranged from my father, both of us having our reasons, one tragic night reunited us together, in a direction of healing.

My father carried a lot of guilt with him through his years.  I was just one source.  Obviously, there was my childhood, which he missed most of.  And then there was his absence during my battle with Hodgkin’s Lymphoma.

But an accident on a cold Winter’s night in December, just days before Christmas, left my father’s “cup” of guilt, overflowing.  He could handle no more, and sadly, more was going to come.

My father and stepmother had gotten into a heated argument.  Being just before the holiday, there was still some last minute shopping to do.  Having to put the argument aside, my father left the house to start the car and warm it up.  As my stepmother followed shortly after him, crossing the poorly dusk covered street, my father watched in horror as she was hit by a car, who had not had their headlights on yet.

Though my father’s attentions clearly were focused on the immediate medical needs of my stepmother, clearly my father could not stop thinking about what happened earlier that night.  He felt that had they not had that argument, at the least, he would have been crossing the street with her, and perhaps he could have seen the car, or at least taken the brunt of the impact.  He felt responsible for that evening.  He felt… guilt.  And because he could bare no more, he needed to release at least what he could.  The damage that my stepmother suffered, was permanent, and that guilt he would never be able to release.

The apple has not fallen far from the tree.  Like my father, I would accumulate guilt, some that I have been able to release, and some, like my father, I will likely carry to my grave.  And to the average person, this makes no sense.  “Just get over it.  It is no big deal.  It has nothing to do with today and now.”  If only it were that easy.

One of my first memories of something I remember doing wrong (not me in the picture), was throwing a snowball through a window.  Sure, not the smartest idea, but it was a light snow, not slushy and hard, definitely did not expect it to do damage, but it did.  And my friend got blamed for it I would later find out.  As soon as I found out, I admitted my fault.  There are a few of these stupid moments in my life as a child.  In these cases, while the actions were bad, the guilt was actually healthy, because it taught me accountability.

Then there is the unhealthy guilt. 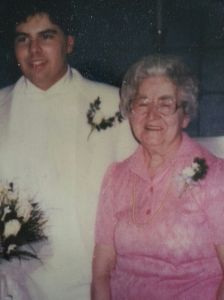 My grandmother was my world, my moral compass.  She was my first immediate contact with the world of cancer having been diagnosed with breast cancer in 1986.  In 1998, she was diagnosed with her second cancer, ovarian.  As she was about to begin her chemotherapy, I stopped by the Saturday before just to visit her, as I often did.

Keep in mind, I had already faced my Hodgkin’s Lympoma nearly ten years earlier.  As soon as I walked into her house, I could tell something was not right.  On the dining room table was all of the literature, pertaining to things that she would need to know about going through chemotherapy.  None of it had been touched.  I wanted to think my grandmother was just neat about it, but there were no “folds” in the booklets to even provide evidence of being opened.

As I sat across from her in the living room, I noticed that she had cut her hair real short, buzz cut length, something I had never seen before.  Clearly a sign that she was preparing for what lay ahead side effect from her chemo.  But something still did not feel right.  She was withdrawn.  Barely a word was said during the hour visit.  Her thoughts were clearly elsewhere.

As I prepared to leave, I told her that I would visit her the next day.  Of course I was hoping she might seem a bit more “up” in spite of what she was facing.  I cannot explain what happened next or why.  Typically, when I left my grandmother’s house, I gave her a hug and kiss goodbye, and told her I loved her.  This Saturday, I did not.

That next morning, I was at church, when my grandmother called me.  She informed me that she was going to the hospital, that she was not feeling well.  When I told her I would leave right away, she told me to stay where I was.  I ran a youth group, and she knew I had an activity later that morning into the afternoon.  She told me that she would see me later that evening as originally planned.

Later that afternoon, during my youth event, another phone call had come to the church.  This time, and I honestly do not remember who it was that called, but the message was, my grandmother had died.  I was devastated.  Not just for the loss, but the fact that the last time that I saw her, was the only time, I did not tell her that I loved her.  I would never get that chance again.

Like my father, a guilt that I can never release.

As a rule, from that day, I have dealt with any issues, right at that moment, or as soon as possible.  The expression, “do not go to bed angry”, an important lesson both my father and I learned the hard way.  You may never have the chance to make amends.  Fortunately, there are not many things that I have done that have left me with any burdens of remorse.  And for the most part, if there are any, they involve my daughters and any absences that I may have as they have grown, a result of a divorce. 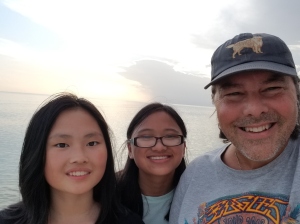 Especially this year, Covid has wreaked the most havoc in being able to spend time with my daughters, especially during the early weeks of the pandemic.  With no plans or structure in place how to deal with the outbreak, and me having a compromised immune system from my Hodgkin’s days, the most difficult of decisions had to be made, to cancel visits.  We live a distance apart, and safe travel arrangements needed to be arranged, and at that point, no one knew what to do.

But unlike my younger days, and like that of my father, I deal with my actions right away, giving the opportunity to heal and move on.  My daughters understand my health issues and struggles.  It does not make the losses any less painful, but it matters that they understand.

The toughest guilt of all to get through, not just for me, but for so many others, is survivor guilt.  Typically associated with those who have survived wars, natural disasters, tragedies and other accidents, survivors of cancer often develop guilt.  And the response from the “non-cancer” world is always the same… “you have nothing to feel guilty for, surviving cancer” or “how can you feel bad for surviving cancer?”

It is not that simple.  For instance, in my case, while Hodgkin’s Lymphoma has a fairly high cure rate, its treatments have cost me greatly with my health and late developing side effects from the chemotherapy and radiation therapy.  But again, here come the chants, “but you are still here!”  Again, it is not that simple.

These are just some of the wonderful people I have gotten to meet over my survivorship of over thirty years.  But they are all gone.  Some from the cancer, some from immediate side effects, some from late side effect issues.  They all had Hodgkin’s Lymphoma like me.  And there are literally hundreds of more photos I could post.  Why them?  Why not me?  What is so special about my body, that I am still here and they are not?

Yes, I know.  What I am really saying is, “it is not fair.”  Obviously cancer is not fair.  It does not matter how old, if you have family, if you are riding a huge wave of success.  The fact of the matter is, and I realize I do not possess the power to make the sun rise, or the waters to flow in the rivers.  But these friends of mine, deserve to still be here.  I am.  So should they.

That is survivor’s guilt.