The Different Sides Of Dad

The most important responsibility in my life, is clearly that of raising my daughters.  Several years ago, how we took that path changed, when our family went through the divorce process.  But my goal for my daughters has remained the same as the day they were each placed in my arms, to prepare them as best as I can for the life ahead of them.

From the beginning, I have expected a few things of my daughters as far as behavior, to understand the importance of respect, love, trust, and honesty.  Early on in their younger childhood, if you asked them how they would describe me, it would not be uncommon to hear them say, “he is the ‘no’ Daddy.”  This was in reference to a common response when asked if they could have something or do something.  In fact, I would probably guess, my answer was usually “no” 90% of the time.  I did not do that to be mean.  My outlook was this, that I would rather have them hear the word “no”, than have them be disappointed or worse, throw a tantrum, and be surprised and excited when I do say “yes.”  How many parents have been witnessed dealing in the public with a set plan, only to have to be delayed when a child simply does not understand why a particular moment that a parent was not able to give the child what they desired whether any circumstances like time, money, or simply because.

As I said, my children were told “no” often.  However, there was one time, that I did say “yes”, to allow my daughter to play a “claw” type machine, something no matter how much I tried to convince my daughters was nearly impossible to win, they were determined to prove me wrong.  And on this day, not only was I proven wrong, but on one grab, my daughter actually pulled 2 toys from the bin.  “See Daddy, the machine is not broken.”  And yes, I did return back to “no” responses following the “claw incident”.  This is not to say that my daughters did not have fun.  They have had plenty. 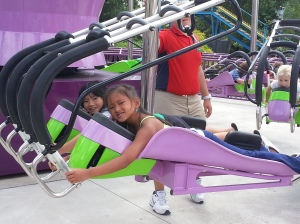 But as they entered school, their characters, personalities, and their reputations had already been formed.  Going into this phase of their life was exciting for me because one of the greatest responsibilities any parent has, is to make sure their children get a quality education.  I began reading to them when they were babies.  We built things together.  And when they brought their first homework assignment home, we sat at the table and worked on the homework together.  Admittedly, I probably learned quite a bit myself as things are taught much differently these days.

Now, nine years into their education, they are blossoming, advancing further with their abilities than perhaps their parents combined.  They know the efforts that they put in, and I make sure they know how proud I am with each report card I witness. 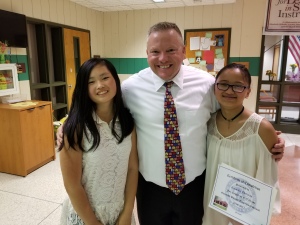 Of course, in the later years of education, preparing for their future education and the decisions that will be made affecting each new year are very important.  As a parent, of course I want them to do well.  This year, was the first year that I actually heard from either daughter, what they might be leaning towards as their future aspiration.  I am very excited and have assured them that I will do all that I can to help them achieve their dreams.  Of course, the next step for them will most likely be college.  On her own, one of my daughters is looking for more ways to challenge her education and actually wrote emails to her teachers, seeking support for higher levels of learning.  I assisted her with the correct language to use with her request, that it would ultimately be left to her teachers to stop and think about the request, and determine without bias if she were in fact ready to advance.  Instead of writing “I would like to be moved up…”, she wrote, “I was wondering if you would consider moving me up…”.  In other words, instead of telling the teacher what she wanted, asking the teacher for her opinion would be the more respectful approach.  As of today, both are assisting her with that very possibility.

So now I spend time, helping them when asked.  They are quite independent right now, but I follow their grades closely, looking for signs when they might be struggling.  We are lucky that school teachers and administrators all work together with us, in trying to deal with things as they come up.  Keeping them on the right path scholastically, will make it much easier to decide where they will go following high school graduation.  And they do think about that.

During one of their visits with me, I was asked if there are colleges in the state where I live.  I explained there were quite a lot of them.  I do not really have a preference where they go, well, Penn State would be great, or any Florida school, but ultimately it will come down to their major of study and what is best for them.  But I am encouraged with the fact that they are at least thinking about life after high school.

With the gears of their education just rolling along as they are hoped for, I spend a lot of time now, preparing them about “life lessons”.  It is one thing to be “book” smart, it is another thing to be “street” smart, and it is a good thing to be both.  I have always wanted my daughters to have opportunities and experiences that I did not have.  But I also wanted them to know how things in life could affect them.  The obvious two are dating and money.

I will admit, I am not ready to hear the words “boyfriend”, “on a date”, “kiss”, or anything else that I cannot stop from happening.  Which is why it is important that they learn from me, just as trust, respect, and honesty have always been important pre-dating, they become even more important once the socialization process begins.  I have told them, anyone interested in them, must respect them.  That means, opening doors, giving flowers, being polite, perhaps carrying school books.  Oh, yeah, and not letting anyone break their hearts.  I know that last one is a tough one, but having had a wonderful babysitter, who was an excellent role model, they understand how important it is to focus on school first before really getting serious about a relationship.

And that just leaves money, and learning how to handle it.  I do what I can to teach them about saving money, learning the difference between “want” and “need”.  They are being taught how to live without, and appreciate and care for what they have.  And if able, to have some fun if resources allow.

I took them to an event last year that both were so excited to attend.  They both brought their own money with the intent that they would buy something there to remember their visit.  But the lesson that they got that day, is something that I know has stuck with them since.  I explained there would be no time limit.  We were there and I encouraged them that they walk the entire floor first, before spending any money.  It would definitely have been too easy to go through all of the money within five minute with everything that caught their eye.  There was only one exception to my request, that if they saw something that they really wanted, and might not be available when we came around the second time, was it something that they would literally cease to exist without before we got back around if it were no longer available, then they could purchase that item.

Together they actually encouraged each other and supported each other on their decisions.  And even after making their purchases the second time around, they still left with well over 60% of the money they brought.  They are now both concentrating on saving money, whether it be by earning cash from chores, or gifts, or simply the change in their pockets.

My hope is that they learn, not to “write a check that their stomach cannot cash.”  In other words, if you do not have the money for something you want, do not extend yourself using credit.  Save, and give it a shot on another day when you have the ability to afford it.  I explained to them how easy it is to get deep into debt so quickly, and unable to get out.  Learn to do without, learn to control want.  Take care of what you need.

I am so proud of my daughters and how they are growing.  And yes, I will take a lot of credit for that.  Though to be fair, they are the ones doing the work.

Posted in Adoption, Education, Family and Friends, Inspired By... | Leave a comment