A Matter Of Fairness 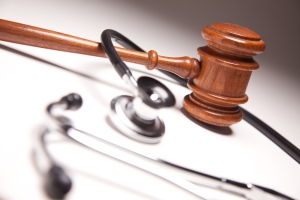 A recent post on one of my Hodgkin’s FB pages asked for the opinion about pursuing legal options because of a lingering and seemingly permanent side effect from their treatments.  The reasoning was understandable, it was not emphasized strongly enough about the potential for the issue to be permanent.

As a survivor, I think all will agree, we have enough on our plates without adding any additional stress and frustrations.  I am not saying we do not have a legitimate bitch, but unfortunately courts and society are not likely to agree.  I am aware of many situations where even at the most extreme ending, death, the legal system often does not support the patient.  You need to prove negligence, in other words, that the doctor was careless, or committed an act intentionally that caused the harm.  And to do that, unless you have proof, you are relying on getting into the head of the doctor at that moment, and that will almost always be a fight that is lost.

Here is one such example, coming from a fellow survivor, who unfortunately is no longer with us.  A known chemotherapy drug to cause heart damage, and if so, almost immediately spotted, supposedly has a protocol for following up with monthly echoes to monitor for any potential damage.  This is not mandatory, and in some cases, unknown.  Go one step further, if the damage is severe enough that extreme intervention is required, such as open heart surgery, you expect everything to be followed by the textbook and the supplies used to be the best quality.  But what happens if a doctor uses a device that has been recalled due to failure concerns?

So, try to follow.  These are two situations with the same patient.  The end result, the patient died.  The oncologist had only planned to do the echo at the conclusion of the entire treatment plan, and it was scheduled.  But according to research, often damage is discovered following the first dose, plenty of time to stop using the drug if this happens.  In this case, the patient, at the end of his treatment, completed it and proclaimed in remission, crashed with congestive heart failure.  How exactly can you prove negligence in this case?  Just because the doctor may not be aware of the better protocol or options, does not mean he was negligent.  Clearly, being aware of the newer research could have made a difference.

Going to the next issue, the patient required a heart pump to assist the heart to beat.  The patient being too soon from treatment not eligible for a heart transplant (was told would need to wait 5 years post treatment), the pump was the only option.  Being smaller than the average patient, the surgeon offered a newer device that would fit his smaller frame.  The device failed, and another surgery would be needed, but by then, too much damage was done to the body, and the patient passed away.  It would be later revealed that the newer style pump had been recalled earlier than when the surgery took place.  How do you confirm if the surgeon knew this or not, to prove negligence?  Yes, common sense tells us, someone had to know.  But without being able to prove 100% negligence…

Then if you feel you have a strong enough case, then you have to hope to find an attorney willing to dig in for the long and difficult fight.  And it most likely will need to be one that if it is going to consume the attorney’s time, it needs to be worth it to the attorney.  There is just so much stacked against the patient or family trying to make things right.  But you have to really consider the stress, heartache, and all the other emotions that will take a toll on your body as you just try to get through the day, which may be hard enough.  I am not saying to not pursue the legal option, I am just saying take all things into consideration – emotions, evidence, etc. before you decide.

Would I pursue legal reparations if given the chance?  I think about it every now and then.  And as I have discussed it with family and friends, I get mixed answers from definitely to being called an ingrate because the doctor saved my life 28 years ago.  But here is my reality.  I was treated with 4 times the lifetime maximum of radiation in a 30 day period.  People who work at nuclear power plants are exposed to less.  Several of the chemo drugs I got are now known to cause extreme side effects to two of the most important body systems, cardiac and pulmonary.  Yet, when I signed my treatment release, all that was said was this, “potential for a secondary cancer or pericarditis (inflammation of the heart).  Well, if you follow my blog, you know the doctors missed it by a mile.  But was it negligence?  I do not think so.  I did catch my oncologist doing something else, running phony blood work which I called him out for, not legally, but he was more than happy to honor my request to transfer me to another oncologist of my choice.

So then, if not the doctor, who would I go after?  The pharmaceutical company that made the drugs?  They should have known more.  Unfortunately, many cancer survivors were not expected to live past 5 years, so why bother late developing side effects as a patient would not live long enough to develop them, or so they thought.  How about the FDA?  They approved the treatments.

I am no so over the limit on pre-existing conditions, a definite high risk for any insurance.  It is not my fault these things have developed in me, or is it?  I chose to be treated and cured.  I should just be thankful and appreciative.  My situation could have ended up much worse had I not been treated.  Right or wrong, there is a legitimacy to that argument.

But at the end of the day, the only way that I find solace, as difficult as it is in my life to get insurance, afford medications, see the necessary doctors, if I added the extra stressors of a fight I had no guarantee of winning, I might not make it to hear the final bell.  I have many other things to deal with and care about while I deal with these issues.  Actually just two, my daughters.  Every breath I take now, is to be here another day for them.  My health has taken enough time away from them.  But this is my choice, and I am okay with that.  Just please, if you are considering legal options, remember, you are definitely not the only one going through this.  The fight in court will not be easy.

2 thoughts on “A Matter Of Fairness”