When You Give A Girl A New Country

Today, I am welcoming a guest author today.  Though we have never met, we have a personal connection, which, when I saw her blog title, I knew that I wanted to share her thoughts with those in my personal circle.  You see… Haley is adopted from China.  I actually got to meet her parents when Haley’s family and I each adopted our second child (respectively) from China.  Haley’s younger sister, and my youngest daughter has a bond that will last forever.  Haley’s family and my family are connected forever.

There are already so many children who have been adopted from China, who have now reached adulthood.  As our children grow, because the majority of us in the adoption world are blended families culturally having those issues to deal with, there are also the needs, interests, and issues that the child will have to deal with themselves.  Well… who better than to reveal what goes on in the mind of someone who has been adopted, heading into adulthood, than someone who is there right now.

So, please allow me to introduce you to Haley, a senior in high school. 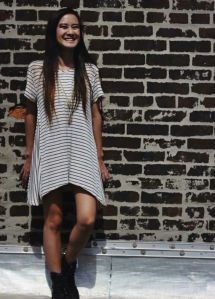 “When You Give A Girl A New Country”

In my family, we celebrate an extra holiday every year.

We call it my “Gotcha Day” because on September 12th, 1999, I met my parents for the first time. That day is the day we became a family.

I’m writing this article to answer some frequently asked questions about adoption that I have gotten over the years, currently get, and will continue to get throughout my life. I answer these questions on behalf of myself and many other adopted kids around the world; I’m sure they’ve received the same questions and can relate to my answers.

Growing up, being adopted has proven to be interesting. Some people try to avoid talking or asking about my adoption; many treat it like a sensitive topic. People view the notion of adoption as a tragedy—they treat talking about adoption like talking about a death. People tread very lightly when asking me about my adoption, and they always seem to be very uncomfortable and nervous.

The former has always confused me, because why should anyone feel uncomfortable to ask me about my loving family? Why is the very blessing that brought me to where I am today treated like a tragedy?

Probably the most frequent question I get asked is if I would want to meet my birth parents eventually. Being that the adoption was international and thus closed, we have very little information on either of my birth parents, so the idea of ever actually meeting them is very far out of reach. But even if I could, I don’t know why I’d want to. Meeting them wouldn’t be some magical moment like it would be in the movies. I wouldn’t feel any kind of special connection to them immediately or anything. Who’s to say I would even like them?

I think this is only a thing adopted kids truly understand, but having blood to blood relation doesn’t actually have anything to do with being a family. I have encountered the term “real” parents multiple times in my life, and I want to make it clear that my parents that I live with now are my real parents. They clothed me, fed me, cared for me, and raised me. They are the people that are responsible for the person that I am today, and they are the people that gave me the entire world. I don’t know about me, but it is them that deserve the title of “real” parents. They parented me, thus they are my real parents.

Another frequently asked question I receive is if I am upset or angry at my birth parents for giving me up.

Honestly, I’m not upset or angry at all, but instead, I am indescribably grateful for the decision that my birth parent(s) made to give me up for adoption. They chose the best option out of what I see was three: the first being adoption, the second being to kill me (wich is a common practice done to unwanted children in Asia), and the last being to keep me and try to raise me. Although I do not know the circumstances of my birth parent(s) situation, I can infer that because they indeed did give me up that they were not in the best position to keep me. If they tried to keep me, my life would’ve been a struggle.

I cannot express my gratitude towards my birth parent(s)’ knowledge of what my life would’ve been for me and instead of selfishly keeping me, deciding to give me up and give me opportunities they would’ve never been able to provide.

One of the most commonly asked questions that I’ve received throughout my life is if I believe my parents do not love me, or could not love me, as much as they would if I was their biological child. And this brings me back to a point that I made earlier: blood relationship does not define family.

My family has shown me more love and care than I could ever repay them for. They’ve given me the world and provided me with everything I could’ve wished for in the world. Without them, I would be nothing. They have loved and supported me as if I was their own, because honestly, I am their own.

Although I was not born of the two of them, they are still my parents and they will always be my parents. Biological relation is irrelevant in family. Family is about showing love, care, and support throughout a child’s entire life, and that’s what my family has given me. 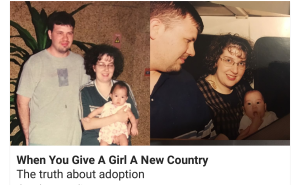 Posted in Adoption, Education, Family and Friends, Inspired By... | Leave a comment