Once again, a sad goodbye is said, to another survivor of Hodgkin’s Lymphoma, the same cancer I faced in 1988.  And like me, over the years, faced with dealing with late effects caused by the treatments that saved her life from cancer.

Like so many that I had come to know, I first “met” Davina on a Facebook page for Hodgkin’s survivors facing late effects.  This page is a critical tool for us survivors because where medicine fails us in surveillance and care, the members of this group provide information, experience, guidance, and support.  Myself, I had been on there for years already, as well as other internet support groups.

For the most part, Davina was able to manage her issues, mainly struggling with an undiagnosed shortness of breath.  Many times this issue can be traced to either cardiac or pulmonary causes.  But for Davina, there had been no answers. 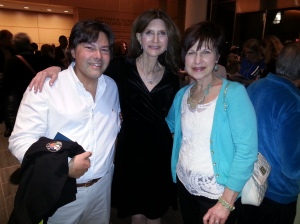 A few years ago, I got to meet Davina in person with another fellow survivor.  We were attending an event for writers who contributed stories to a program called “Visible Ink”, written by patients and survivors, published by Memorial Sloan Kettering Cancer Center.  Davina was so impressed with the program, that she inquired about it.  I explained to her that there is a special “release” that comes from writing, a kind of therapy.  And for those of us that struggle with dealing with the physical issues we were dealing with, and the emotional, often times, simply venting through a story helped in ways professionals could not.

I recall one of the first stories Davina wrote, it was not even cancer related.  But it was about her life as a little girl dealing with teasing she received for a condition with her sight when she was younger.  It had scarred her so badly, that this still bothered her late in life.  In actuality, I almost felt like at times, this issue was worse than dealing with the cancer and its late effects, though clearly we knew it was not.

But she wrote several pieces after that.  And she thanked me for encouraging her to write.  Davina truly enjoyed it, though she was clearly her own worst critic.

Over the last year however, her health started getting worse.  The late developing side effects got more difficult to deal with.  But the whole while, Davina continued to offer support to everyone in our Hodgkin’s society.  And she not only offered support in relation to cancer or treatment side effects.  She also offered support for other issues that many of us were going through.  No matter how much she struggled, she was selfless in support of us all.  And I will never forget that about her.

She passed away this past weekend.  Another to survive cancer, only to succumb to the side effects caused by the treatment that saved her life.

I have experienced this many times over my survivorship.  Davina is now the second friend in the last few months to have left us this way.  As I tell others, no matter how often this happens, it never gets easier to deal with.

Davina, you will be missed.

Posted in Cancer, Inspired By..., Side Effects, The Heart