The Importance Of Heritage

In a rare moment for me of just kicking back and relaxing, I put the television on.  As I flipped through the channels I came across National Geographic’s Wild channel.  Programming most of this afternoon is geared towards China and the world that most people are unaware of beyond the smog and politics.

Admittedly, I was not born with this interest in the largest country of the world.  But almost twelve years ago, I had to make up for my lack of interest in learning about China during high school in very short time.  Of course, both of my daughters are adopted from China.  I will leave the back story to other posts that I have written or will write.

I have always made it a point from the moment the decision was made to adopt from China, that my daughters’ heritage would be adopted as well.  I never had any intention of hiding the fact that from appearance, clearly you could see that we were not biologically related.  Although there has been the never-ending joke that my daughters have my eyes at least, making reference to the fact that I do not have what the Asians call the round “round eye” of Caucasians, rather my eyes are more “almond” shaped as is the characteristic of Asians.  Ironically, my elementary school classmates were the first to point out this characteristic to me.

One of the things that impressed me most about the Asian population, is their commitment to traditions, something we as Americans rarely commit to any.  Customs, traditions, expectations, are all just that, expected.  I believe this helps the Chinese people to be such a “peaceful” and more content population. 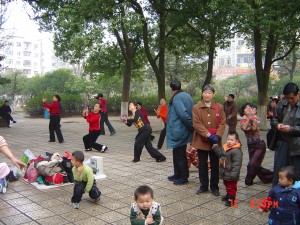 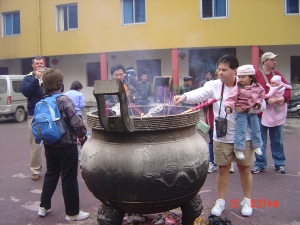 The major benefit to me of having adopted children from China, as opposed to many other international programs, is because China required the adoptive parents to travel to adopt the children.  Many other programs bring the children to the United States.  By traveling to China, I got to see first hand, the land, hear the  language, and truly appreciate where both of my daughters have come from.  It will make it a lot easier to teach both of my daughters. 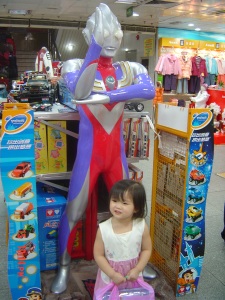 Yes, that is a picture of Madison standing in front of a statue of childhood superhero, Ultraman.

Both of my daughters have come from different areas of the same province.  One came from a more populated area, the other, considered more farming.  It was during this visit, that we got to see the other life that either of our daughters could have ended up with, were it not being for China allowing us to adopt them.

During our second adoption, our guides had informed us that we would be travelling to a village, very similar to where our daughters were from, though not that particular village.  We would stop by a market to buy “gifts” for the children of the village, pretty much toys and candy.  As our bus pulled into the village the bus was mobbed by everyone excited for what they probably knew we were carrying just for them.

This was actually quite overwhelming, because as the following pictures will show, the families here have barely anything.  At moments, we felt as if we were in an ocean, and someone had thrown chum into the ocean bringing on an onslaught of sharks in a feeding frenzy.  All of a sudden larger children were overpowering smaller children for what they had received from us.  New toys ended up broken, candy fell to the ground.  It was actually quite heartbreaking.

Once we were done with this “greeting”, it was off to tour the village. 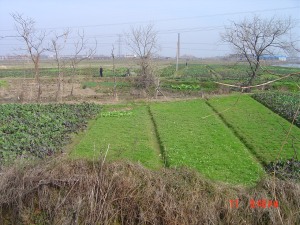 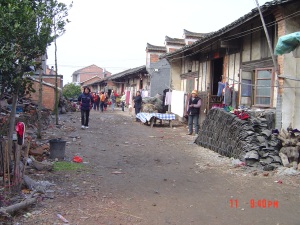 There were no cars.  Floors were all concrete.  No electric, and no indoor plumbing.  The families here survived by farming, and other than their traditions and customs, this was all they had.  And they seemed content.  It was very humbling for us Westerners to have seen this side of China, and to enable us to explain the appreciation that our children will be taught as we try to explain where they came from and why.

And there have been plenty of blessings from our adoptions as well.  I met nineteen other families who also would become “adopted” by me, as family of our own.  Our children are the only connection they have to China, here in the United States.  And it has been important to everyone to make sure that all the girls and the families have kept in touch with each other.

On a larger scale, I have met dozens of other families who have also adopted from the same orphanages.  For many years we would gather to celebrate the common bond at a different location in the United States.  I have developed many friendships because of this.  But perhaps, one of the biggest surprises would come from one of the families of this particular group.

I have always intended to be able to provide both of my daughters with as much information about their past as I could.  Their finding locations, any foster family they may have had, information about their villages and such.  For my oldest daughter, information was discovered that revealed that she had a crib mate with the foster family that cared for her until we came to China for the adoption.  It turns out that this “crib mate” actually lives in Scotland, the foster family has been confirmed as well as the time period.  Today, we exchange pictures in hopes that one day, the two girls will get to meet.

And that is where I am at right now.  I still have hopes of having my daughters to return to China.  I have promised them this.  And for my oldest, I will do what I can to make sure that she gets to meet the little girl that shared a crib with her for a short while.

In the adoption documentary “Somewhere Between,” the issue of adoption in the later years of a child’s life is dealt with.  Madison had a brief cameo in the movie where she mentioned to one of the lead actresses in the movie, “I am from China too.”  Madison is very proud of her heritage, as is Emmalie, through Madison is a bit more vocal about it.  Which is all the more reason and importance, that the children be taught about the land from where they came from.

Posted in Adoption, Education, Family and Friends, Inspired By...