A New Goal, And Within My Grasp

“Where the Hell are you?” was an email that I received recently.  Understandable.  It has been a while since I have written.  Not that I have been at a loss for topics, not with hundreds of prompts in my cue, and at least five current prompts in my head at this moment.  In fact, I was in the middle of a post, when I closed my laptop for the last time during this period.  I will address that in a day or two.  Instead, I want to share something that I got to experience this week.  Because if you think it is a great accomplishment, for someone to reach a longevity of 30 years, cancer free, this week, I was humbled.

Back in 1988, when I was diagnosed with Hodgkin’s Lymphoma, or as it was called then, Hodgkin’s Disease, there was only one thing that mattered to me.  Prove to me that it could not just be beaten, but that you could survive a long time after treatment.  There was no internet for me at the time.  In fact, the only others that I even knew that were even dealing with the same cancer as me, were three other “kids”, though I never saw them during my treatments.

My uncle had told me of a friend of his that had beaten Hodgkin’s back in the 1970’s.  “Great,” I would say to myself.  How do I get to meet him with my own eyes, see for myself?

Finally, towards the end of the 1990’s, evidence of survivors began to appear, through the world wide web.  Heck, I even got to meet some.  Oddly, for those that I did get to meet, it was not so much about longevity, but rather, the many complicated health issues that they were dealing with, due to late developing side effects from their treatments.

But as I officially entered the world of survivors dealing with late issues, I finally began to recognize just how long many of these other survivors had been around, decades, one even as long as over sixty years.

Last year, on March 3, I recognized my 30th anniversary since defeating the beast.  Spending all that time looking for others who have lived long lives after Hodgkin’s, I was not paying attention to the achievement myself.  And as my health issues continue to add up and get complicated, I must admit to wondering, “how much longer?”

It is a reasonable question, given what our bodies got put through decades ago with treatments.  And I have buried many survivors whose bodies just got “tired.”  This does not mean that I go through life watching the biological clock, sulking, waiting.  Quite the contrary.  And this past week, I confirmed why.

Not only has diagnostics, treatments, and prognosis improved over the decades, so has technology.  On Thursday, a Zoom conference was held among fellow Hodgkin’s survivors.  This month’s topic… the 50 year club.  That’s right!  Guest speakers were survivors of Hodgkin’s Lymphoma who were over 50 years in survivorship.

There were four of them.  Three were teenagers when they were diagnosed.  One was just five years old.  To put that in perspective, I was twenty-two when I was diagnosed, still considered young enough to be in the group of pediatric cancer.  But as the screen grew with participants, many had added the survivorship number to their screens, and soon I saw many others, beyond 50 years in survivorship, and many others in forty years plus survivorship, and the balance, those of us, in the thirty year class.

At one point, personally, I felt that hitting 30 years of cancer survivorship was a big deal.  And it is!  Don’t get me wrong.  But all of a sudden, in front of all those fifty year survivors, I felt like I had any years of survivorship put in, as if the final day of my treatment.

My survivorship of Hodgkin’s Lymphoma, like many others, has come at a pretty harsh price in the form of late side effects from my treatments, that never seem to end.  But I do not live my life in fear of those issues.  I have two daughters that are every part of my survivorship. 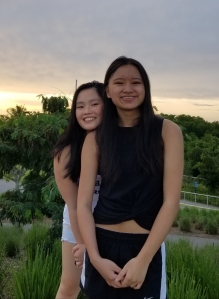 And I have a lot of plans that still involve both of them.  And guess how long I expect that to take?  That’s right, at least twenty more years.  My calendar on this page notably marks my 40th year mark, the next milestone I expect to hit.  I know that it won’t be easy.  But I will get there.

Being humbled to have gotten to witness meeting so many other super long term survivors of Hodgkin’s Lymphoma, I know that it can be done.  And I am going to do all that I can to get to that point.  In 1988, I never would have thought that would be possible, because I just could not see it with my own eyes.