Under Your Scars… There Is No Getting Over Them

The first time someone ever told me to “get over it,” occurred when I finished my cancer treatments, wanting me to just move on.  It was my first wife, who felt it was time to move on with our lives.  I would hear this phrase repeatedly later on in my survivorship as health complications from my treatment past, would continually arise.  Emotionally however, it would begin to start taking its toll on me.  And again, I would be told to “get over it.”

Like many other cancer survivors, I have my share of physical scars from surgeries, biopsies, and from the treatments themselves.  But I also have my emotional scars as well.  These scars have been diagnosed as Post Traumatic Stress Disorder, PTSD.  And while the late comedian George Carlin actually did a routine on the progression and history of PTSD, I assure you, it is no laughing matter.  I will give you an example of just how powerful this issue is. 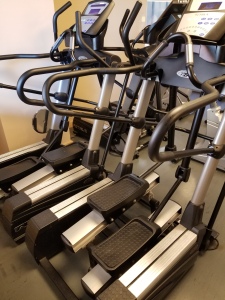 This is a piece of exercise equipment, called an “eliptical.”  It is named after the motion of the footwork necessary to operate.  It is a great way to burn calories and lose weight.  But for me, this machine almost killed me, literally.  And I have never gotten over it.  And as much as I really need to, just get over it, it is easier said than done.  The sensors on this machine would register my heart rate race from the low 70’s to 152 in less than a minute of exercise.  Now, there is more to the story, but for the purpose of this post, I could have died.  My cardiologist even went as far as to tell me, it was not a matter of if, but when.  This machine could have done just that.

Yet here I am later, participating in cardiac rehab for an additional procedure to my heart I had earlier in the year, and yes, I had to face this machine once again.  It is a part of my routine.  I should be able to just “get over it.”  I have nurses and trainers watching my efforts.  My heart is working as it should following the procedure.  Everything is in my favor now, and yet, I can feel the panic as I step up, and start stepping.  My eyes stare at the heartbeat numbers on the display as they climb to triple digits causing me intentionally to slow down so as not to push my heart, and at the same time, not giving my heart the work it needs to stay strong.

I cannot just “get over it.” 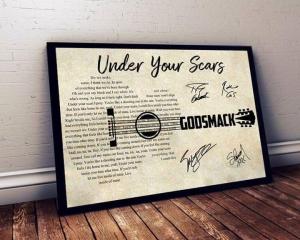 Music has always been a part of my coping, my healing, my surviving.  I have always focused on a particular song to help me deal with whatever I am facing at that moment.  And every now and then, a song comes along, and has a profound effect on me, to the level that I develop an entire new respect for a particular band.  And in this case, Godsmack released a song called “Under Your Scars.”  When the song was released, and I heard the lyrics for the first time, clearly I was going to hit “repeat” on my stereo system again and again and again.  Calling the lyrics powerful is a huge understatement.  And the music put to the words make the song a powerful anthem to those who struggle with their “scars,” whether physical or emotional.

Godsmack’s lead singer, Sully Erna explained that this unusual ballad for the band, was inspired after hanging out with friend and fellow musician, Lady Gaga (yeah, I know, how do those two acts get together?).  But as I read the interview on Altpress, Erna stated, “In the short amount of time we hung out, she made me realize that we all have these imperfections, these wounds that we carry (whether they’re physical or emotional) that cut so deep they can cripple us.  These feelings leave us vulnerable, or embarrassed, or even unworthy at times. And our human nature — when they’re exposed — is to shut down, rather than embrace them and realize that not only can we overcome them, but we can also become an inspiration to inspire others to have a voice and find their inner strength to show their scars off loudly and proudly to the world. Our ‘Scars’ are nothing more than our battle wounds from life and they helped mold you into who you are today.”  This quote is directly from Erna’s interview on Altpress by author Alex Darus, July 19, 2019.

The song, “Under Your Scars” goes even further than being written and performed.  It is now an organization formed by the members of Godsmack, called The Scars Foundation.  This non-profit organization is aimed at assisting those battling depression, suicide, bullying, and other issues, physical, and emotional.  Here is the link to the Scars Foundation page:

You can see and hear directly from lead singer Sully Erna just what the Scars Foundation is about, and how it will make a difference.

While I am fortunate that I have help to deal with my PTSD and my various health issues.  Unfortunately, there are so many who do not.  And some cannot get help.  Many do not want help.  And for the rest, left with only questions.

Our worlds are often rocked when we hear of celebrities who commit suicide, wondering why, assuming that popularity, celebrity, and wealth are some sort of cure or prevention for anything bad in life.  Curt Cobane, Robin Williams, Michael Hutchence, Chris Cornell, Anthony Bordain, the list goes on.  In reality, my life has been touched by so many friendships and relationships who have experienced the realities of suicide.  Several of my friends I have known for a long time and never knew what they had kept inside of them.

These scars do not go away, physical or emotional.  You do not just “get over it.”  You find ways to get through each day.  You find ways to help deal with feelings through various means, one of which I exercise quite a bit, writing.  Whether by blog, diary, or book, expressing yourself in writing is a way to release energy from the physical self, and while it does not heal, it does help to give a chance to understand.

We all go through difficult times in our lives, and the extremeness of the event, does not make one less difficult or meaningful than another.  Pain is pain.  The only one who understands fully what we are dealing with is ourselves.  And if we are able to reach out and express ourselves to you, please do not say, “you just need to get over it.”  They are called scars for a reason.  Scars never disappear.

If you are depressed or anxious and are having thoughts of suicide, call the National Suicide Prevention Lifeline: 1-800-273-8255.

Here is the link to the song, “Under Your Scars” by Godsmack.

Posted in Bullying, Cancer, Education, Family and Friends, Inspired By..., Side Effects, The Heart and tagged depression, Godsmack, suicide, Sully Erna, under your scars