The following is a continuation of my series, recognizing my 30th year as a Hodgkin’s Lymphoma Survivor.  This post subject matter includes dealing with nausea, something that we had no help with thirty years ago.  Whereas today, nausea is often no longer an issue because of how it is controlled.

With the IV placed into my arm, quite easily I might add, Brenda, my chemotherapy nurse would now turn her attention to the tray to my right.  There were many syringes on this tray, some filled with saline to help “flush” the line feeding my veins, four other syringes filled with the half of the treatment cocktail, that would hopefully save my life. 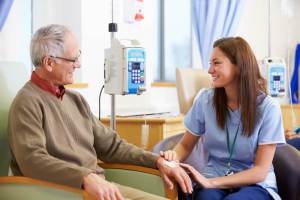 Before I go further, I want to recognize the oncology nurse.  I wrote in an earlier post, about the lack of empathy from my former oncologist, and the excuse being given to me, “how much ‘death’ he has to deal with each patient, along with his other patients.”  Brenda, as do every other oncology nurse, was going to be spending the next several hours with me, knowingly injecting toxic medications into my veins, over a period of months.  During all of my treatments, Brenda and I would have many discussions, some cancer related, some general conversations, and others directed toward emotions.  Looking back, I have so much respect for Brenda and all of the other oncology nurses, because it is they who deal with the every day events of the patients.  They are the ones that put their emotions at risk, exposing themselves to feelings and concerns.  They are the ones who really deal with both the successes and losses of a cancer patient.

I could see the expression on Brenda’s face.  My case was too close to home for her, as she had a son around my age.  While I never had any doubt that she would give me the best care she could, her mentioning her son to me, as well as the teariness in her eyes, I knew she was going to take really good care of me.

To be honest, I do not recall the order of the drugs given to me.  And the only thing I recall is that I knew she had to take care with one of the drugs as far as delivery, slow enough not to blow out the vein.  Though I had my headphones one, I would turn the volume down to allow me to hear what the next instructions would be.

The first drug injected into me, was horrific.  Not from a pain standpoint, but it was a drug that I could taste, and from my veins that made no sense to me.  It was a metallic taste, and it was nauseating.  One side note, we did not get any kind of medicine to help with nausea back in 1989.  I was about to be dealing with the one side effect I had seen played out on TV and movie screens.   Brenda could tell I was uncomfortable with that particular infusion, and assured me that it would not last after it was finished.

At that point, I just came right out and asked, “so how much time will I have before I puke my guts up?”

She told me that I should expect to make it home in time following the end of the treatment.  Though after how that drug made me feel, I was not too sure.  I had a “barf” bag on me, just in case.

I turned my music back up, and put myself mentally into a place, where I could use that imaging technique, to actually picture the chemotherapy, attacking the cancer cells.  Stunning them, knocking them silly, as the next drug to be delivered would be another solid jab to my cancer.  I would not taste this drug, but I was warned by Brenda, that it would like make me pee “red.”  Not to confuse it with blood.

Again, I turned the music louder, this time, wanting to drown out any more directions from Brenda.  Because each time she wanted to talk to me, she took me from the “place” that I needed to be, to tolerate what was happening.  I would get through the remaining two infusions without even realizing it.  Three and half hours after I arrived, I was finished with my first treatment. 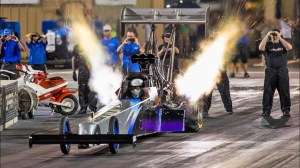 I lived only twenty minutes from the oncology office, without any traffic.  So far, I was not feeling any wave of nausea that I had been dreading.  It was going to happen.  I made it home, and climbed three flights of stairs to my apartment, now fumbling for my key to the door.  “It” was coming!  And fast!  I finally got the key into the lock, turned it, opened the door.  I tore off my jacket, dropping it onto the floor, and raced toward the bathroom, just fifteen feet away, down the hall from the door.

And that is where I would be for the next half hour.  It had been just as I had viewed in the movies and on the television.  Once everything had been brought up, my body still felt the need to vomit, but it could not.  That did not stop it from trying, which is called dry heaving.  I was exhausted.  My stomach muscles felt as if I had done 10,000 situps.

As I lifted my head up, reached for a hand towel above to clean myself up, I saw a figure out of the corner of my my left eye.

It was my cat, Pebbles.  She was adopted back before I went through my radiation therapy.  Apartment regulations would not allow a dog, which is what I really wanted.  But, they did allow cats.  Because of my belief in the power of “pet therapy,” and its relation to healing, Pebbles would eventually be described as my chemo cat because of the care she would give me, once I got done in the bathroom.

I honestly believe animals know when we are not feeling well.  And she really did look confused as to the way I was using the toilet.  But as I stood up, washed up, I then made my way to my bedroom, totally worn out.  I climbed into my bed, fully clothed but now shivering, either from being cold, or from feeling so weak from what I just experienced.  Pebbles jumped up on the bed with me, and laid down on top of the pillow next to me, my wife’s pillow, until she would come home from work.  Strange as it may seem, it made me feel safe, that someone was watching over me.