Growing up in a small town, Emmaus, Pennsylvania, every Memorial Day, most would gather for a military processional that would conclude in a specially dedicated memorial garden.  There would be speakers, a moment of silence, and conclude with a 21-gun salute by the honor guard representing the various branches of our military.

It was a sad day, though as a child, I really could not grasp the true meaning behind the day.  But the fact that it was normally a damp and dreary day, nearly every year that I can remember, seemed to fit the mood.  We would leave the memorial service with a hand crafted poppy flower.

The tradition of the “poppy memorial” now goes back nearly 100 years and is attributed to the World War I poem, “In Flanders Fields.”  It is believed that a field of poppies were the first flower to grow in the cemetery for fallen military during World War I.

Memorial Day for me has never been about picnics, days at the beach, or the unofficial start of Summer.  Sure, I do partake in these more enjoyable activities, but first and foremost, Memorial Day for me is about remembering those who fought for this country and gave the ultimate sacrifice.

I learned about war from history being taught in school.  I was born just before the Vietnam War, so I clearly have no memories of that conflict.  The first war that would actually catch my attention would be the Persian Gulf war, where the United States took the position to help liberate a middle east country from a neighboring dictator.  Since then, there seems to be a new war starting every year.  Though we as Americans can have opinions as to whether or not we belong in an international conflict, that is not what Memorial Day is for.  Because one is certain, no one enlists with the hopes of going to war.  And whether we have enough information to deem for ourselves if the war was worth it, whether we belong in that conflict, does not change the fact that each and every one of our service men and women deserve our respect and support.

The very first military personnel I knew, were both uncles.  One served in the Air Force, and the other served in the Navy, for decades, including time in Vietnam.  As an adult, it became too common however, to know someone who would end up being sent overseas to fight for Democracy and humanity, whether it be a friend, a co-worker, or now a nephew or niece, or even your own child.

War has seemingly always been a part of our history in the United States.  Since 1965, when I was born, here is a list of most, if not all the conflicts:

This list is staggering.  And again, while we can have our opinions whether the wars were worth our involvement or the sacrifice of or service men and women, today, we MUST honor and remember those who gave all.  And for those who have come home, we MUST take care of them and improve the VA system.  It is unacceptable to have those who fought for our freedom, not get the care or the assistance that they need to survive what will stay with them a lifetime, something that we who have never served, can even imagine what they are dealing with.

So please, before you head to your picnics, parties, or beach, take a moment to remember what Memorial Day is truly about. 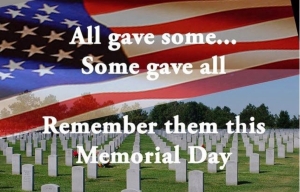