Here is a little known fact about me that not even those close to me are aware of… on my body I have four tattoos.  They are not blatantly hidden, but you cannot see any of them as long as I am dressed.  Together, they form a cross, actually a crosshair across my chest.

Of course now you must be asking yourself, “why on earth would you get a ‘crosshair’ tattooed on your chest?  It is not as morbid as you think, nor as detailed, but actually quite valuable, and important to save my life.  You see, prior to beginning my radiation therapy for Hodgkin’s Lymphoma, I had been given 4 tattoos, one at the base of my neck, one each on the balls of my shoulders, and one on the middle of my abdomen.  This was done to help align the linear accelerator accurately for each of the 30 doses of radiation I would be given to help me beat my cancer.

But that does not mean that I have not thought about getting an actual tattoo.  In fact,  I have several concepts ranging from a tribute to my daughters to recognizing my fight with cancer.  One thing that stands in my way is my ridiculous fear of needles which also sounds like an odd thing to hear from someone who has gone through so much medical trauma in his life. 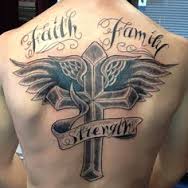 I am really fascinated by tattoos, as long as they are tasteful.  And it does not matter if they are done on men or women.  I do not want to see tattoos glorifying violence or hatred.  The tattoos that really spark my curiosity are those that consume an entire area like a “sleeve”.  Again, I do have an appreciation for ink when it is done tastefully.

This unusual post was sparked by someone with an unusual location for a tattoo, although it is quite popular.  I do not recall the design exactly, something floral with some words.  But it was done on the top surface of her foot.  Now, that particular area  I am more than familiar with its sensitivity.

One of the prehistoric diagnostic tests I underwent was something called a “lymphangiogram”.  Simply, the idea was to inject a radioactive dye into the lymph vessels which would then be followed up by an x-ray, lighting up your entire lymph system.  It was a very long procedure, but to see the x-ray was quite fascinating.  But the thing I will never forget, was just how sensitive that area of skin was.  And I could only shake my head wondering how much that particular tattoo must have hurt while she was having it done.  The fact is, our bodies have a lot of sensitive areas like this, and it does not stop anyone from being inked there.

One of the first things many of my fellow cancer survivors due is get a tattoo to mark the completion of their fight.  And I admire that. 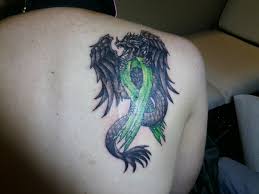 I cannot say that I will ever get one.  Like I said, I have several ideas if I ever do decide that I want to get a tattoo.  This is just one of those “by the way” posts, an observation that sparked a memory for me.

Posted in Cancer, Inspired By..., Recreation