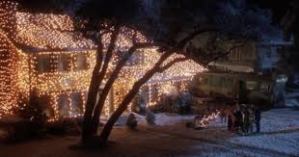 The one thing that I truly do enjoy about the Winter holiday seasons, are the lighting displays.  Of course, I hold Clark Griswald (made famous by actor Chevy Chase) responsible for my appreciation for tasteful and beautiful light displays.

This was one of the first years that I began to attempt Griswaldian levels of lighting.  The fence on both sides had icicle lights hanging from them, a cherry tree was completely covered in lights, and the holly tree across the driveway had more than 3000 lights strung around.  The rest of the house, without getting onto an extension ladder would have lighting nets on every bush, lights around the garage door, and some figurines.  The next year I would conquer my fear of heights and get up on the ladder to the roof to finish my efforts.  But all told, it still took me about two days to decorate, just the outside.  A nice touch about my former neighborhood, was a tradition to put out luminaries on Christmas Eve, for everyone who participated.  I would tell my children that this provided Santa “runway” lights for his sleigh.  But it was quite a sight as over 500 homes participated in this tradition.

As time went on, a Christmas phenomenon finally became popular, though many years in existence already, that took Christmas decorating to a whole new level.  A heavy metal rock band, formed from various other bands, produced some Christmas music, which ended up being performed in concerts annually, with audience members ranging in ages from 3 to 83 years old.  And with each year, the Tran Siberian Orchestra built sets with more music, more lights, more lasers, more visual effects.

Soon it became a competition for neighbors to outdo each other with their Christmas light displays.

This would be spectacular if my post only stopped here, but it does not.  Soon, the average Christmas light decorator would soon incorporate their own entertainment into their displays.  And combine that with music from TSO, produced efforts like this:

Soon, cities and towns all over would soon realize the gold mine that was right in front of them, taking public locations, and setting up their own Christmas light displays (which many now actually incorporate the other Winter holidays into them as well).  For a flat rate, you could drive a car full of family and friends, tune in your radio to a station playing holiday music, and just sit back and enjoy someone else’s efforts. 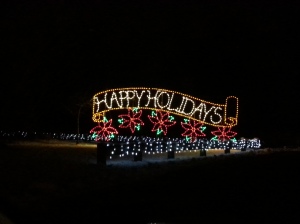 It is going to be different for me this year.  Living down in the south for the first time, I do not have snow to accentuate any holiday lights, nor do I even possess any sizable home to decorate as lavishly as I once did.  But I still enjoy going to see the lights following Thanksgiving.
I recently came across a community near where I live, that probably 98% of the neighborhood participates.  And clearly, all denominations live in this area, but as a community, mostly all participate.  Each street is assigned a “theme” which the Winter symbol is placed along their mailbox (a light display of candy cane, snow flake, star, etc.), and you simply drive through this entire neighborhood (for free I might add).  It is truly a party atmosphere as many of the families and friends of the home, are seated around small campfires watching cars drive by admiring their decorative efforts.

Holidays can be very difficult for some people, but getting to experience sights like these, help to make the season just a little bit brighter… yes the pun was intended.

Posted in Family and Friends, Inspired By..., Recreation