One thing that I always said over the years, I wanted more for my daughters than I had.  What parent would not strive for that with their children.  It was important to me that my daughters did well in school.  My daughters learned and gave love to their family and to each other.  Each daughter has limitless compassion and empathy for those less fortunate.  And while these are all common values they share today, they are both still their own unique selves.

I was never one to want the girls dressed identical, and had they even been twins, I still might not have wanted that.  But while my daughters love each other as sisters, there is that independence that they want of each other, and rightly so, they should.  After years of having lost the battle of dressing alike, my oldest finely had enough when being asked if her sister was her twin.  My youngest, all too often feels compared to her older sister, and many times, not in a flattering light.  It should not be a really big deal for the sisters to be thought of so closely, but to them, their independence is as important as their unity.

The early life lessons of manners, respect, love are long in the past, the easier part of being a father.  But now that they are older, more important lessons are taking place.  Because now decisions that are being made, are most likely going to have an impact on their futures.  And as a parent, there is not greater pressure.  Everything must be done correctly.  Of all the challenges that I have faced in my life, there is none greater, than preparing my daughters for their future as adults in this world.  Again, with the idea, better prepared than I was to do so. 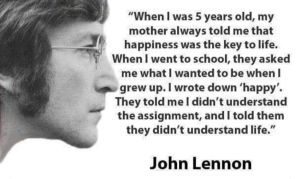 But there is a balance that must be maintained.  Clearly the pressures that they face in school, will be nothing compared to what they face as adults.  They must not forget this simple thought, happiness must be a priority.  My older daughter can be quite philosophical, and this quote from John Lennon was perfect for the conversation that we were having.  And my youngest definitely agrees and wants to make it her life motto.

There is no doubt, then when my daughters have completed their educations, they will both be on better ground than I was for the adult world.  Both will head in separate directions as far as their life’s plans.  To compare them to each other is not only wrong, but is completely unfair.  Yes, they are sisters – as I often pointed out when I was asked, only to be clarified, “no, they really are sisters.”  The gag was, because obviously being adopted, people were curious if they were biologically sisters, which neither they or I think about.  They are sisters, and always have been, always will be.  They will carry my last name as their own, until they marry if they choose to do so.

Make no mistake, my daughters are sisters.  They have things in common with each other, and they have their differences.  There is no comparison between the two.  As their father, I am their protector, their teacher, their role model, their encouragement.  And in the homestretch of their childhood, these responsibilities as their father are even more important than ever.  It is my job to teach them how to correct their mistakes so that things are not made worse.  It is important to learn about options and choices, and consequences or rewards from those decisions.  I want them to learn the “adult” way to deal with conflict when it arises.

At the end of each day, the flame from my torch of responsibility grows a little more dim, only because the flame is growing on each of their torches.  I could not be more proud of my daughters and all that they have done so far, and now, as I hear who they want to become, I can only say… “wow.”