Denial – Forget The Cliche’s And Jokes

As I explain the events of my diagnosis of Hodgkin’s Lymphoma, which occurred thirty years ago, I guess I should have mentioned something which might explain the importance of following these posts (in case you missed the first two, they precede this post – no others in between).  Hodgkin’s Lymphoma, while having a very high remission rate, is considered a rare form of cancer.  And it is that rarity that makes it difficult for many doctors to diagnose or even look for.  As I continue on with these posts, between my original doctor not knowing what to look for, along with a patient who never “saw the headlights of the bus about to run him over”, I am sure I am not the only patient to have experienced this struggle in my mind.

So, previously on “Paul’s Heart”, I mentioned about discovering the lump, being treated for the lump, and upon getting back to my regular routine, I was injured. 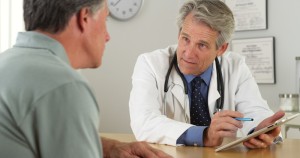 I went to that appointment that evening very confident that my friend sent me to someone who would not only understand my injury, but get me back to normal as quickly as possible.  I am not demeaning my family physician by any means.  This was strictly about getting back on the basketball court ASAP.

The doctor looked about the same age as my primary care doctor, and for the most part, everything seemed to go the same way as it would have with my doctor.  Weighed… measured… and then escorted into an exam room.  When the doctor came into the room, he shook my hand and asked me what he could do for me.

Me:  Well doc, I think I either pulled something or hopefully not, tore something in my left shoulder area.

He began to check me out, could see me wince in pain when he would lift my arm and straighten it out.  Perfect.  He would now be able to get me on the right path to getting this taken care of.

Doctor:  So, how did this happen?

Not what I was expecting.  I thought, you looked, you found, you diagnosed, let’s get moving.

Me:  I had this thing going on, and my family doctor told me to take it easy for a couple of weeks, take some medicine, and I should be fine.  I just went overboard when I went back into training, stupidly resuming with the levels and weights that I was at two weeks prior instead of adjusting.

Doctor:  What were you being treated for?

I am notorious for being super involved in my health care, and those close to me.  Admittedly I am much worse today with this attitude.  But as a patient, I want you to not only hear me, but listen to me.  My agitation level had begun to increase.

Me:  Um… I had this lump on the left side of my neck.  My doctor said it was probably a cold, gave me medicine for it, and it pretty much disappeared.  I mean, it’s still there a little bit.  But anyway, I hurt myself when I got back to the gym and was just stupid.

Doctor:  Did your doctor do any bloodwork?

Now I am getting annoyed.  I was there for a sports injury.  My lump thing was taken care of, not what I was at this appointment for.

Me:  Forget the lump doc.  I am here about my injury.

And on that note, I walked out.  Never to be seen or heard again.  Or so I thought.  The doctor had made the appointment for me, and upon confirmation via telephone by the referred doctor, I cancelled the appointment.  The doctor I had just seen did not even pay attention to what I was saying and why I was there.  I had a sports injury.  Enough with the fucking lump already!!!!!

I got a call the next morning at work from the doctor that I saw that prior evening.  He had heard I cancelled my appointment and was quite stern that I keep the appointment.  It was an approach from a doctor I had not experienced before, but somehow he got through to me (note – this similar approach is now used by several of my doctors to get through my stubbornness).  A new appointment was made for that evening.