A Farewell To Fran 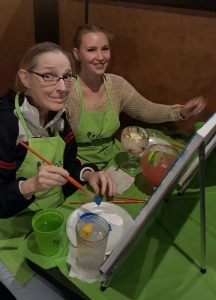 Though my friend Fran and I never met in person, we knew each other quite well.  We were what I refer to as “crossovers.”  We met each other on a long term cancer survivor list serve before each of us made the leap to Facebook.  Fran had already had her issues with her late effects, but I had just begun my journey following my heart surgery caused by my radiation and chemotherapy treatments.

It was on Facebook however, that Fran reached so many more people.  Just like the rest of my fellow survivors, we only want to find support, understanding, answers to the many things that still stump the average doctor.  And we find that in those who have gone through similar treatment experiences decades ago.

But when we were not dealing with one of our health issues, we were able to share stories about things we were able to do to enjoy life, and sadly things that we were no longer able to do.  While Fran would mention her former love of karate, she did not dwell on it.  Rather she loved to talk about her daughter.  Over time, she also made decisions to reach out to other survivors, and more importantly seek out medical care professionals who either knew what we deal with, or at least had an open mind to help find answers.

And like so many other survivors who have passed on, Fran was another who often offered support to others, sacrificing her own emotions.  And that is really what makes the “society” of people I know, or as some refer to as “the tribe” special.  It is not often to be able to say “I know what you are going through” or “I know what you are feeling.”  And that is what makes my fellow survivors so special.  Because they get it. And while they may not always find the support they need from those closest, they know that they can find it in our group.

And that was Fran.

The stories and remembrances are posting now, and it is wonderful to see all the others lives that she touched.  And it is also inspirational to hear the many things that she had done, and hoped to do.  Most importantly being able to see her daughter graduate from college.

Though she had hoped to make it through this last struggle, it clearly was too much.  She suffers no more.

Fran, thank you for the words of encouragement that you always gave to me and others.

Posted in Cancer, Family and Friends, Inspired By..., Side Effects | Leave a comment