Archive for the tag “catheterization”

Please be warned, this post is definitely not recommended for younger readers.

The following pictures are just one example of what an impending death looks like.  To be more specific, my death.  The top photo was taken after my treadmill was stopped suddenly.  Some event showed up on the EKG leads after just a couple of minutes.  What you see is my heart not getting enough blood.  The question is where and why? 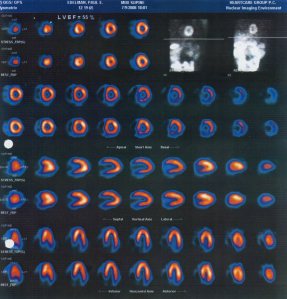 Less than 15 hours later, my cardiologist attempted catheterization, stints, but upon realizing that it was not plaque blocking this artery, but rather scarring from radiation received eighteen years earlier for my cancer.

The last picture, a sketch of the heart, and where my three blockages were.  Another 15 hours later, I was in the operating room, having emergency bypass surgery.

This was only discovered because anytime that I did something fairly physical, anytime I let my emotions get worked up, or let someone upset me and stress me (which happened alot back then), this is what happened to my heart every time.  A blockage of the LAD (the artery on the right side), this is referred to as a “widowmaker”.  The name says it all.  According to my cardiologist, it was not a question of “if ” I would have a fatal heart attack, but “when.”  These pictures are what stress looks like, and what stress can do.