So, I am a little behind in my “30th anniversary” journal, because by September, I was already in my second round of chemotherapy.  I was happily engaged with the Summer visit with my daughters.

To recap, diagnosed with Hodgkin’s Lymphoma in November of 1988.  I underwent all kinds of tests and procedures to determine how bad it was.  I opted for 30 treatments of a ridiculous amount of radiation therapy which by the end of March 1989, I got to hear the news that I was in remission.  Got married in May of 1989.  I went on my honeymoon.  Followed up with my oncologist in June of 1989, only to find out that I had evidence of new Hodgkin’s.  The decision was out of my hands.  I was going to undergo chemotherapy.

And so begins Part 1 of this post.  Chemotherapy.  If there is one word in the English language that scares the shit out of anyone who has ever heard of the word, without even having to go through it, is “chemotherapy.”  We all have the similar immediate thought when we think of chemotherapy, violent sickness.  We can thank movies and television for this, because that is how it is portrayed.  There is no entertainment value in explaining the importance of chemo, what it does and how, and how it can be managed.  The truth is, there is a lot to be aware of before chemotherapy can even begin.

At this point, I want to stress, the chemotherapy plan that I underwent, is hardly, if ever used anymore, except possibly as a last resort.  Progress and newer methods of treatment have resulted in safer and better results.

I was 22 when I was diagnosed, and by the time I was to begin chemotherapy, I was 23.  A young male.  I was not really thinking about anything other than beating this thing once and for all.  But as it is explained to every cancer patient, chemotherapy works by destroying cancer cells.  However, it not only destroys cancer cells, but it also affects good cells.  For men, that includes sperm cells.

I can tell you, that after 30 years in this world of cancer, and the many people I have met or talked to, fertility is a major concern, but oddly only for one gender.  In fact, the younger generations, those in their 20’s and 30’s, women’s top two concerns are being able to have a child and losing their hair.  Men do not really think about it.  But the doctors do think about it.  And because of the risk of infertility, the doctors recommend taking measures to preserve the ability to have children, no matter what.

I have a long time friend whose son went through Hodgkin’s treatments, different than mine.  He was 19 at the time, so as an adult he could decide what he wanted to do.  Much to his mother’s horror, who had one day dreamed of being a grandmother, he stated that preserving his ability was not important to him, because he was not going to have children.  While he may have felt that way at the time, we all know that at the age of 19, recognized as an adult, we do not have all the life experiences yet to be able to determine what is best for us, and a long time to go in our lives, unable to change our mind.

Amongst the chaos, I was still able to understand the importance of what my oncologist was trying to get across to me, that a particular chemotherapy drug in my cocktail, had the likelihood of rendering me unable to get anyone pregnant.  Being a newlywed, not the thing either I or my wife wanted to hear.  But the directions were clear, I needed to preserve sperm prior to beginning chemo, if I wanted any chance of having biological children.

There was a company in East Orange, New Jersey that dealt with storing sperm.  This would be different than just going to a lab, and taking care of business to have motility (the ability of the sperm as well as availability) determined.  The process was simple.  The company shipped out a special insulated container, do the deed, and ship it back.  Results would determine if I was able to have children or if it would even be worth pursuing.

disclaimer – AND YES I AM USING ALL CAPS… THAT IS NOT ME IN THE PICTURE.  Just so we have that clear.

As a teen, as a young adult, who am I kidding, I have never had a problem with rising to the occasion.  Except for one time.  The one time when I needed “it” to work, it would not.

Having tried to manage the situation on my own and having no success, I asked my wife for some assistance.  In a crushing blow to her self-esteem, the effort resulted in the same situation, unable to complete the task at hand, or rather… in hand.

All kidding aside, the pressure on me at that very moment, that the future of any further generations was at that crossroad, but also, I was dealing with the fact that I was facing cancer and could die, and at the least, chemotherapy was going to be the most challenging thing I would ever endure.

Several hours later, and no longer trying, my wife had surprised me with an attack, my mind no longer focused on what needed to get done, but at that moment what I wanted done, the pressure was off, and with the lid on the container closed, so the sample would be off to East Orange to determine my fate.

Only one thing left to do, and as if a page out of Seinfeld itself, I faced public humiliation over what came next. 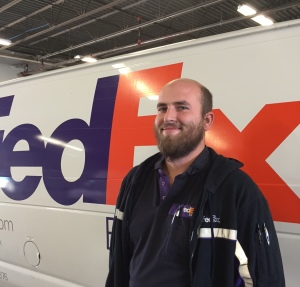 My “package” had been sealed properly, and placed inside the medical container to be shipped.  The Fed Ex driver knocked on my apartment door, to pick up that package.  Even though shipping concerns were not that big of a deal back in the late 1980’s, that did not prevent what happened next.

Fed Ex Guy:  You have a package for pick up?

Huh?  That was kind of rude.  What the hell business is it of his what is in there?

Me:  Just something that has to go to East Orange.

Fed Ex Guy:  It is in a biohazard medical container.  I need to know what’s in there.

At that point, I am thinking, “biohazard?”  My sperm is equivalent to nuclear waste or botchulism?  Trying to find the least embarrassing way to answer his demand, which in spite of me feeling he had no right to ask me, we were at a stalemate if I did not.

I think he definitely regretted asking me as his head lowered to the floor.  The box was clearly labelled.  And he knew how to handle packages like that.  In the end, he left grossed out, and I embarrassed.  The he left, and I closed my apartment door.

The results had come back.  I did not have enough sperm in the sample to recommend “storage”.  I would not be able to have biological children if my fertility did not survive the chemotherapy.  Upon hearing the news, my oncologist still insisted that I store whatever I had, even if only one.  I explained to him that the facility would not do it.  And once again, I heard the “time” speech.  I did not have time to seek out another facility.  Treatment needed to begin, and soon if I wanted my best chance at success.

Next up… Part 2… more tests.  Then a major fight with my oncologist just before treatment begins.  Followed by Chemotherapy Mixology 101.